We gain immense pleasure from having friends and family on board NB Areandare, so when we heard that the son of NZ friends was spending most of 2015 in England, we were keen to get Josh on board.

Fortunately he found a space in his summer schedule to come and stay – and we’re on a fantastic stretch of canal currently which makes it even more special.

Eighteen-year-old Josh is in the northern hemisphere on a gap year exchange at Cranbrook school in Kent, near Tunbridge Wells, and plays rugby for a local club. He’s the first New Zealander to reciprocate the exchange despite British boys travelling down under, until Josh only Aussies had returned.

Following ten days in Croatia earlier in August with some friends, Josh had a few days available before he heads to Scotland for a few days on 20th August.

We’d arranged to meet him on Friday in Wolverton, one train stop from Milton Keynes.

All was going to plan, the train pulled up in the station, Barry and I were ready at the platform. We’d not heard from Josh since he texted to say he’d successfully arrived at Euston and which train he’d be getting.

I’d made an assumption his phone battery had died.

The train stopped. Barry and I walked up and down looking for a familiar face. Doors opened and closed.

Barry suddenly realised he’d spotted him in a carriage towards the front – asleep! He knocked on the window. A little too late. The doors had closed and the train was moving out of the station, with Josh still on board!

He’d bought an open return to Northampton, so at least he’ll use the whole ticket journey! Sadly it did mean buying another ticket – from Northampton back to Wolverton! Sorry Jan, that’s another £6 …

A walk back in time …

We cruised a short way after Josh finally arrived, to Grafton Regis. He soon picked up the nuances of steering a narrowboat and looked most chilled at the stern with Barry. 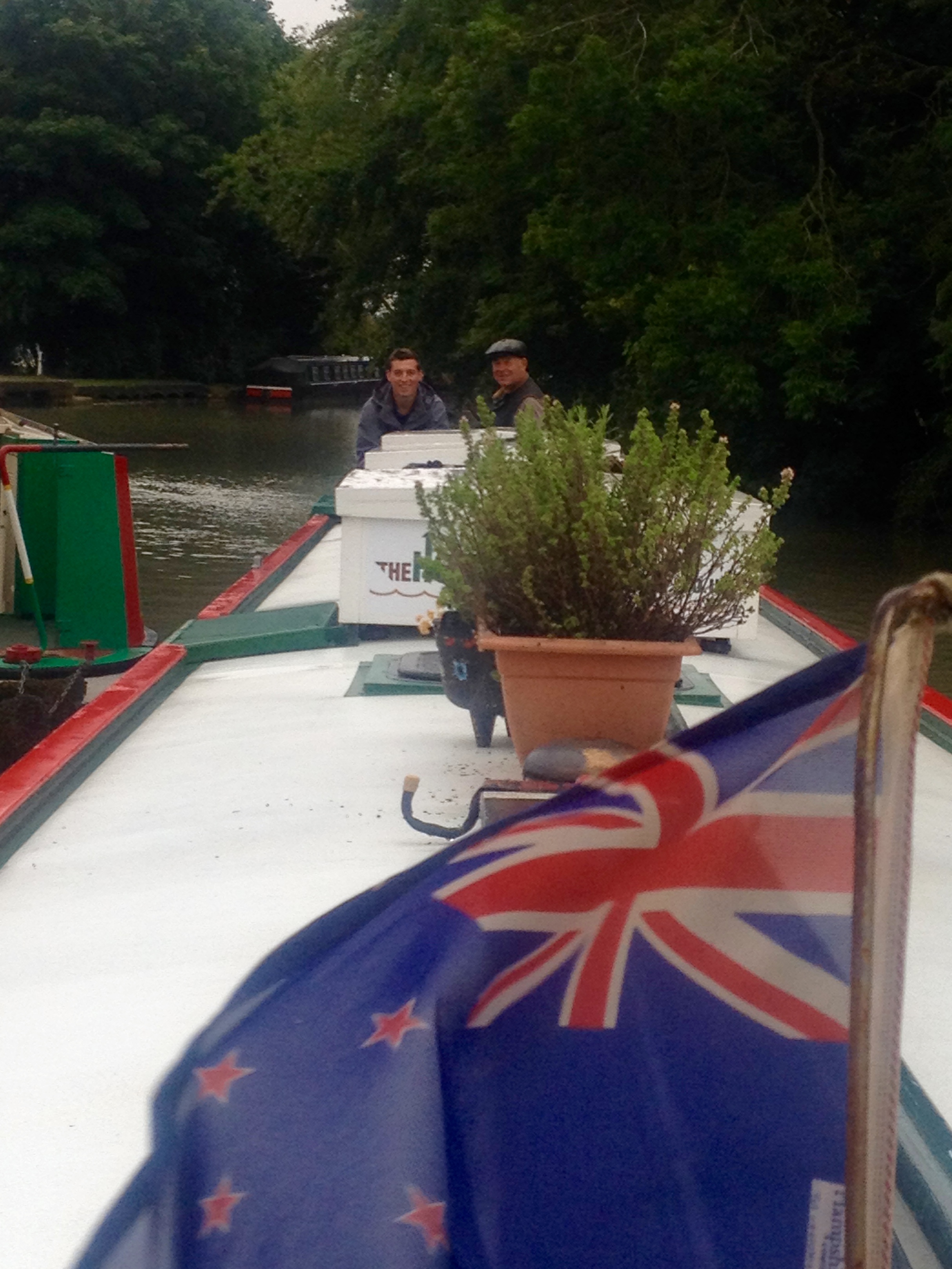 Josh learning all about steering a narrowboat from the master

On Saturday Barry took us on a walk to Grafton Regis. A fellow narrowboater who also happened to be a kiwi, gave us a brief history as he passed us. 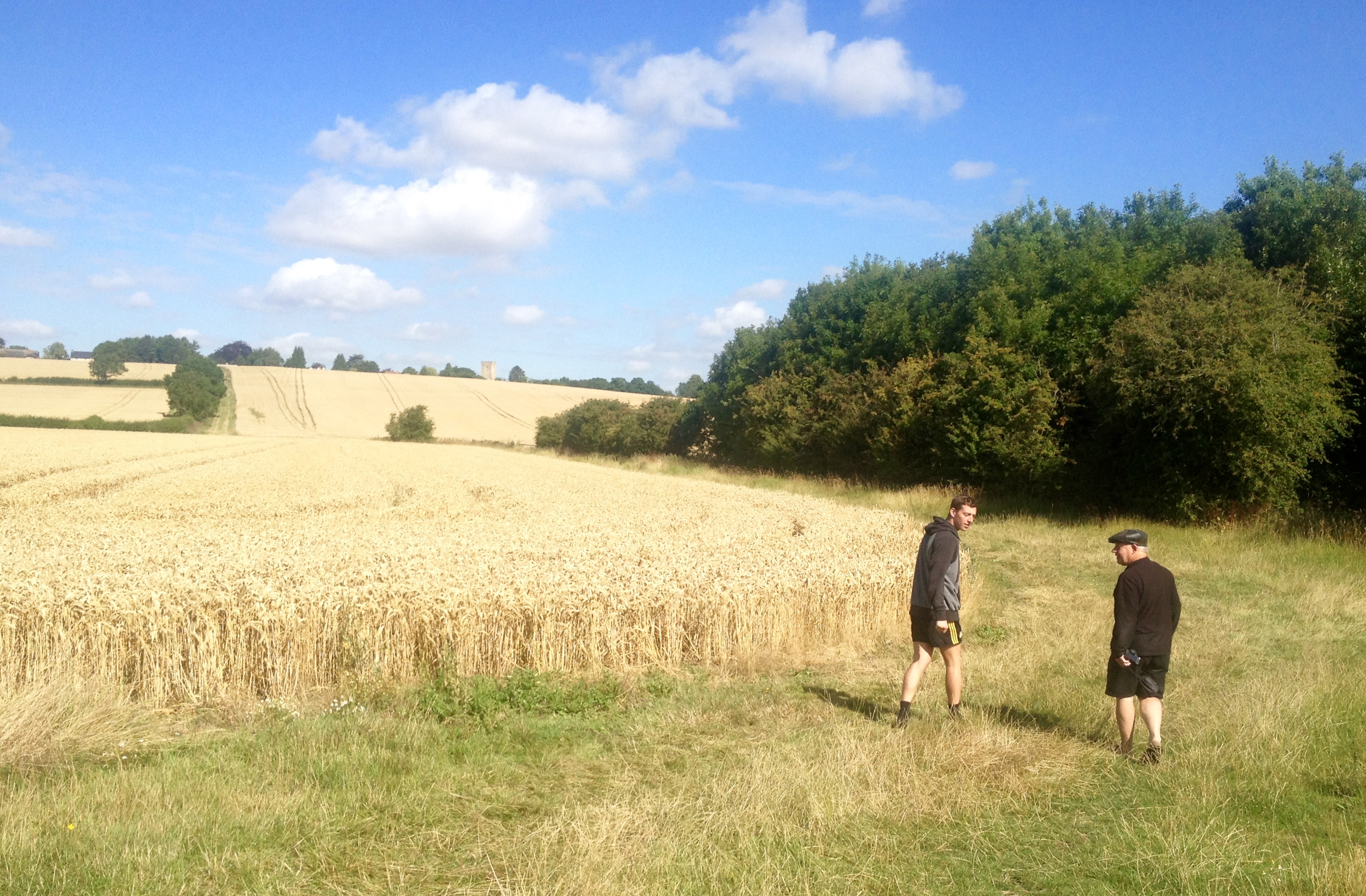 Walking to Grafton Regis along the wheat field

There’s some very grand residences around these parts. The early 13th century Church of St Mary, located in the village, boasts a proud monarchic (is that a real word? It sounds good!) past.

We found it very sad that the church is only open once a month – unless you phone ahead and ask someone to come and show you round. A poor inditement on peoples trust of others – or maybe due to previous problems? 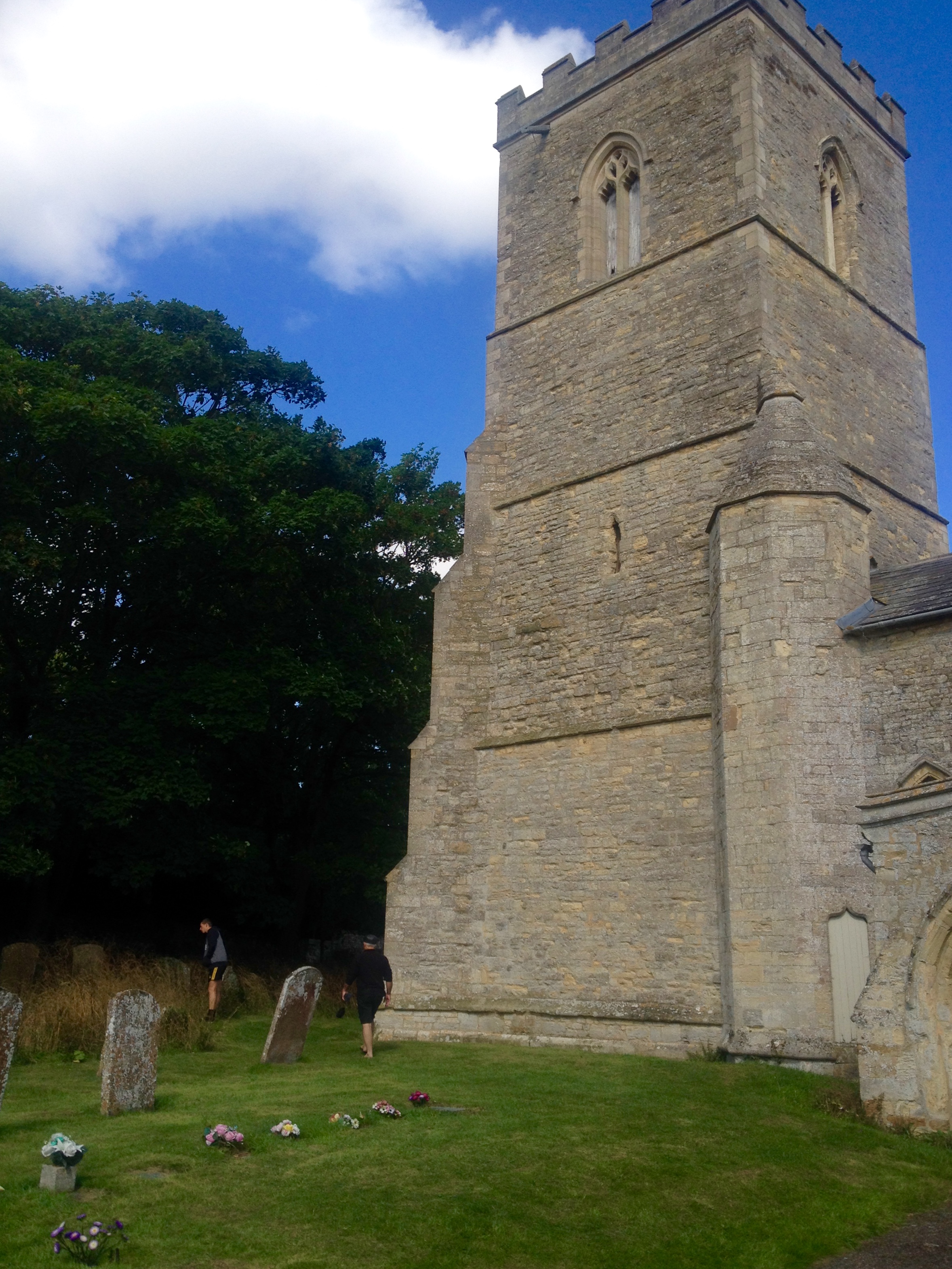 King Edward IV secretly married a local girl, Elizabeth Woodville, here in 1464.  Almost sixty years later, King Henry VIII parted company with Cardinal Wolsey here, as he’d been unable to annul his marriage to Catherine of Aragon. This set the process the foundations of the Church of England.

Henry also spent most summers of his reign at Grafton, and made Woodville Manor House into a palace. Unfortunately its remains were destroyed in a Civil War siege of 1643.

Nearby was a settlement called Alderton. We’d hoped to walk there too, as I’d been invited to facepaint at their ‘Art Festival’ on 5th & 6th September after being ‘spotted’ at Blisworth with some out of the ordinary designs. 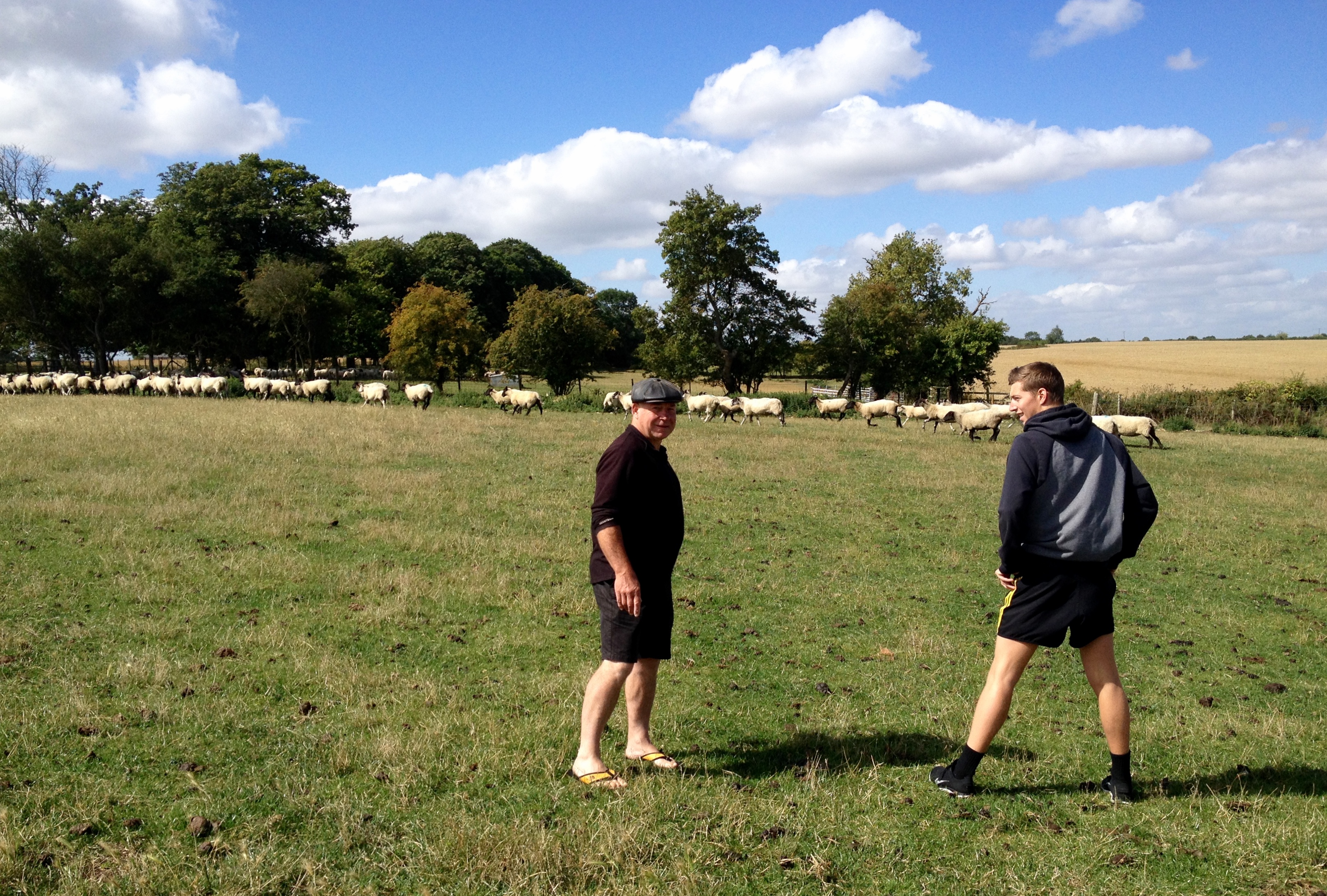 The public footpath took us across a field full of sheep – who stampeded into an adjacent paddock as we walked closer to them!

Disappointingly the logistics of transporting myself and my kit from the boat and back, over two days, when we’d be en route to Dudley from Northampton, proved too onerous and expensive.

Having looked at the village online, we’d really wanted to make it work so we could visit. But it wasn’t to be. Maybe next year.

We didn’t even make it on foot on Saturday, despite our best intentions! There’s hundreds of miles of rights of way in UK, but many of them aren’t terribly well-kept. The path we found to Alderton from Grafton Regis was one of these. We abandoned the mission less than half way – too many obstacles and stinging nettles! 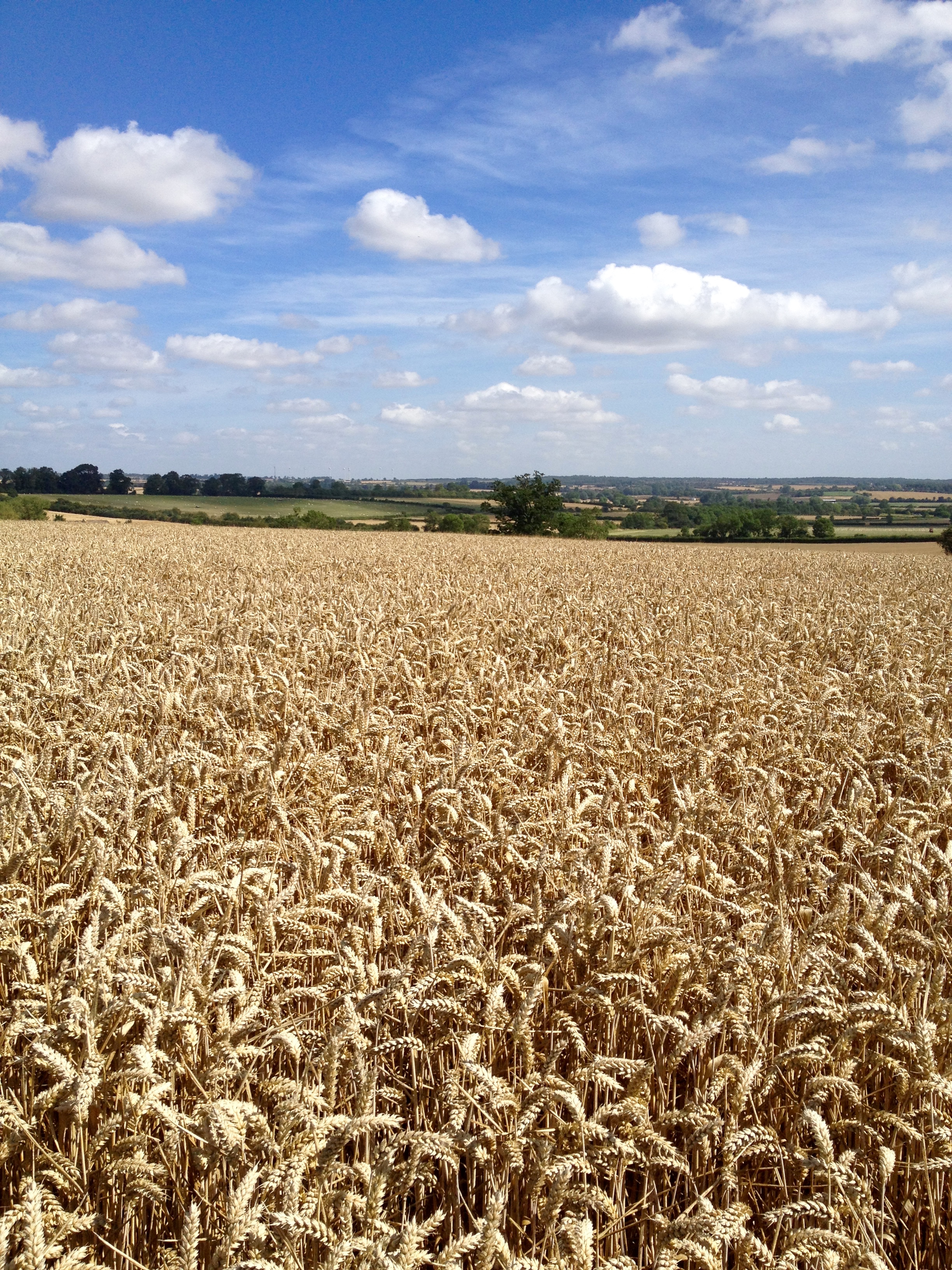 A stunning view across the countryside on our treck 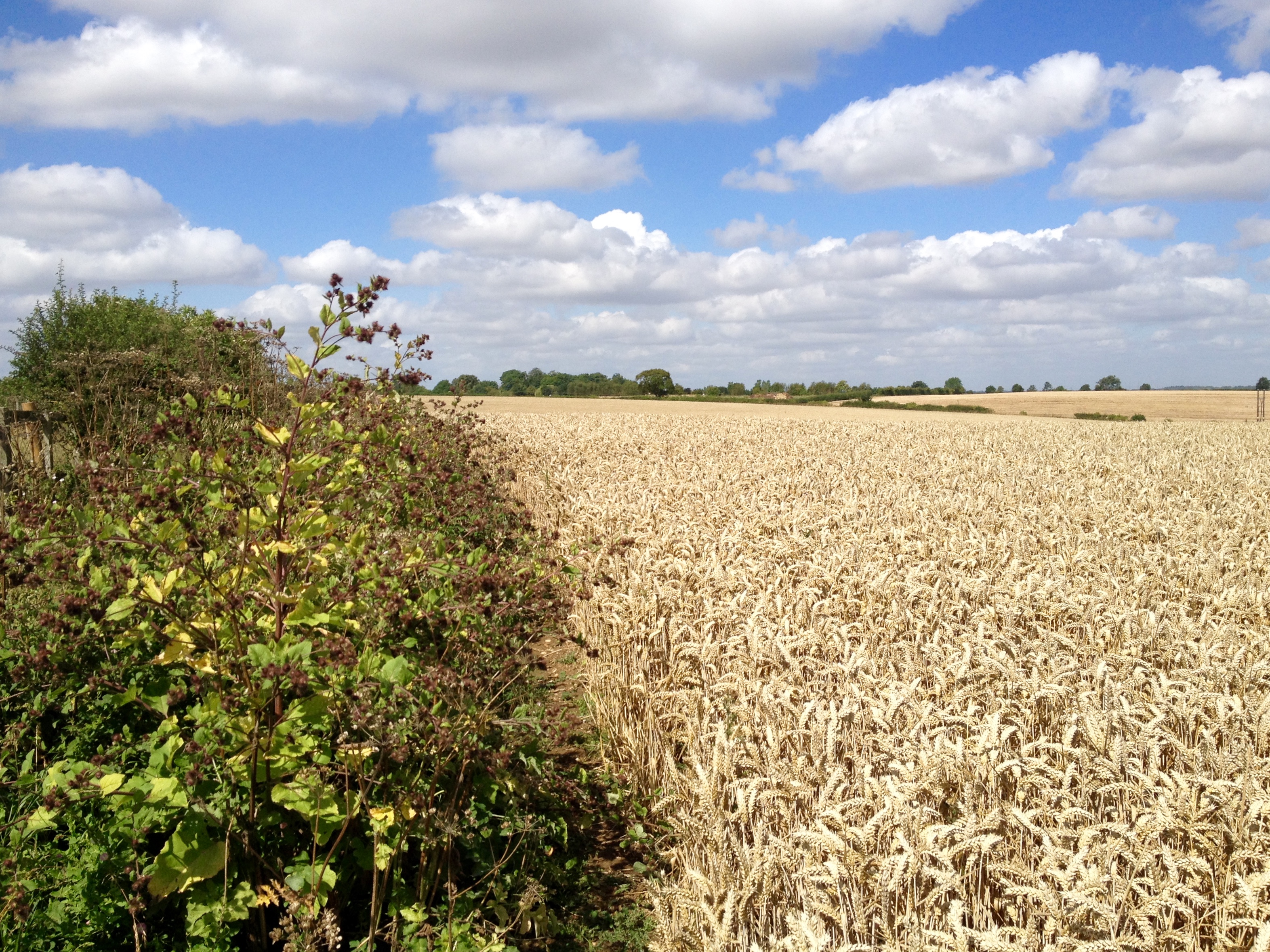 Looking across the fields to Alderton – note the narrow footpath (hard to spot isn’t it?!)

Stoke Bruene, The Boat, and a game of Skittles

Returning to Areandare, Josh got stuck into steering before working seven locks to travel to our destination of the day – he soon picked up the technique of both. 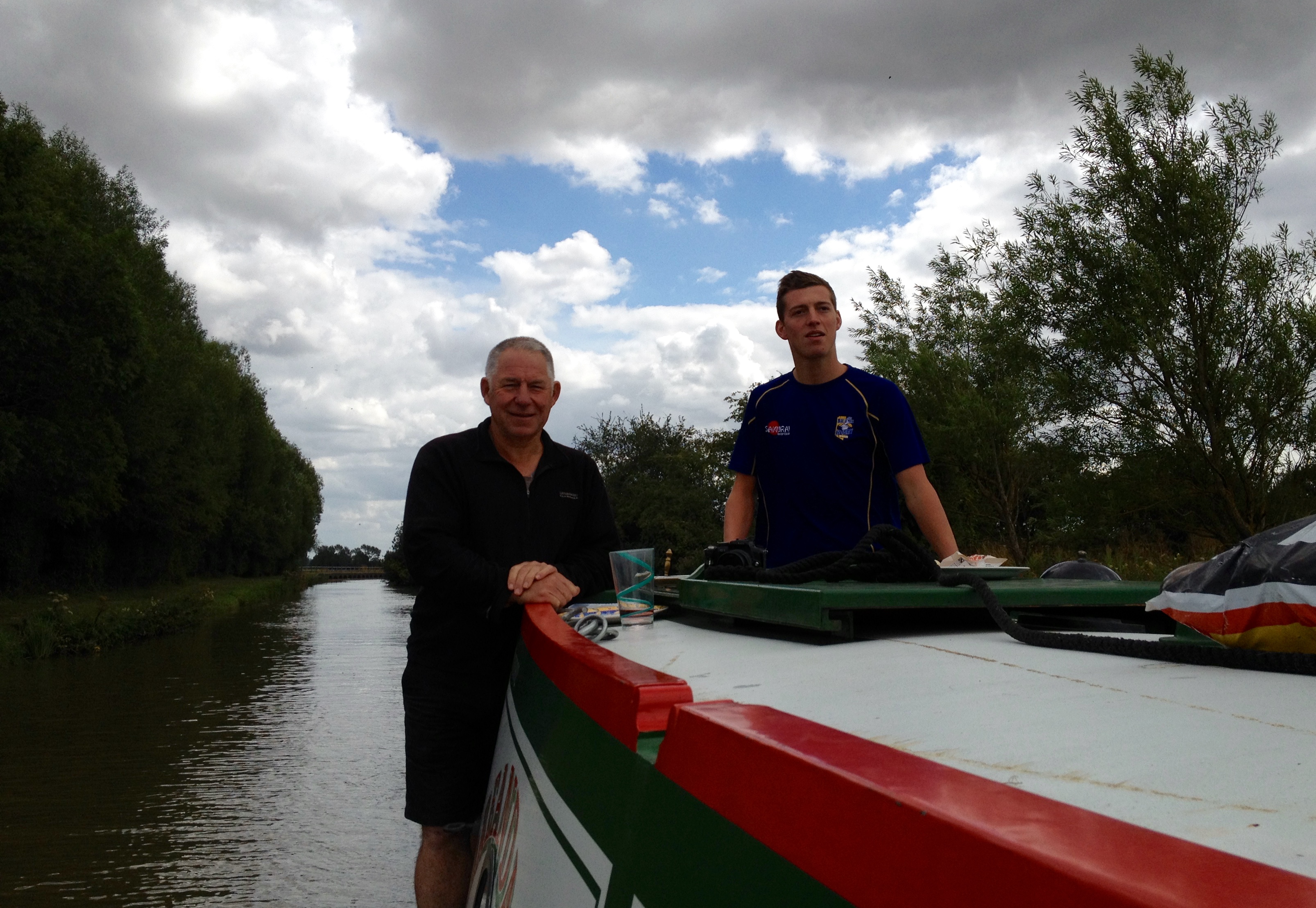 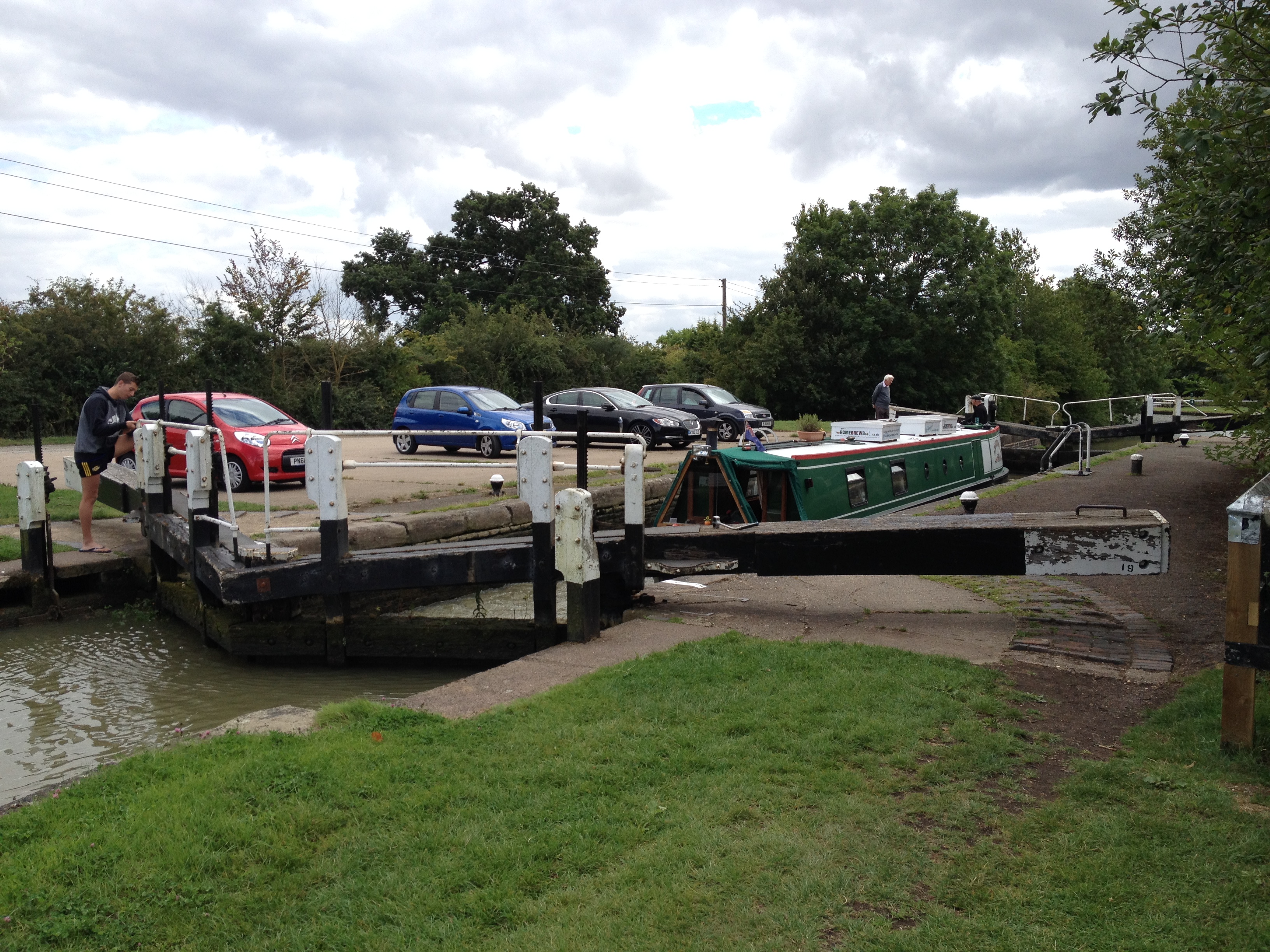 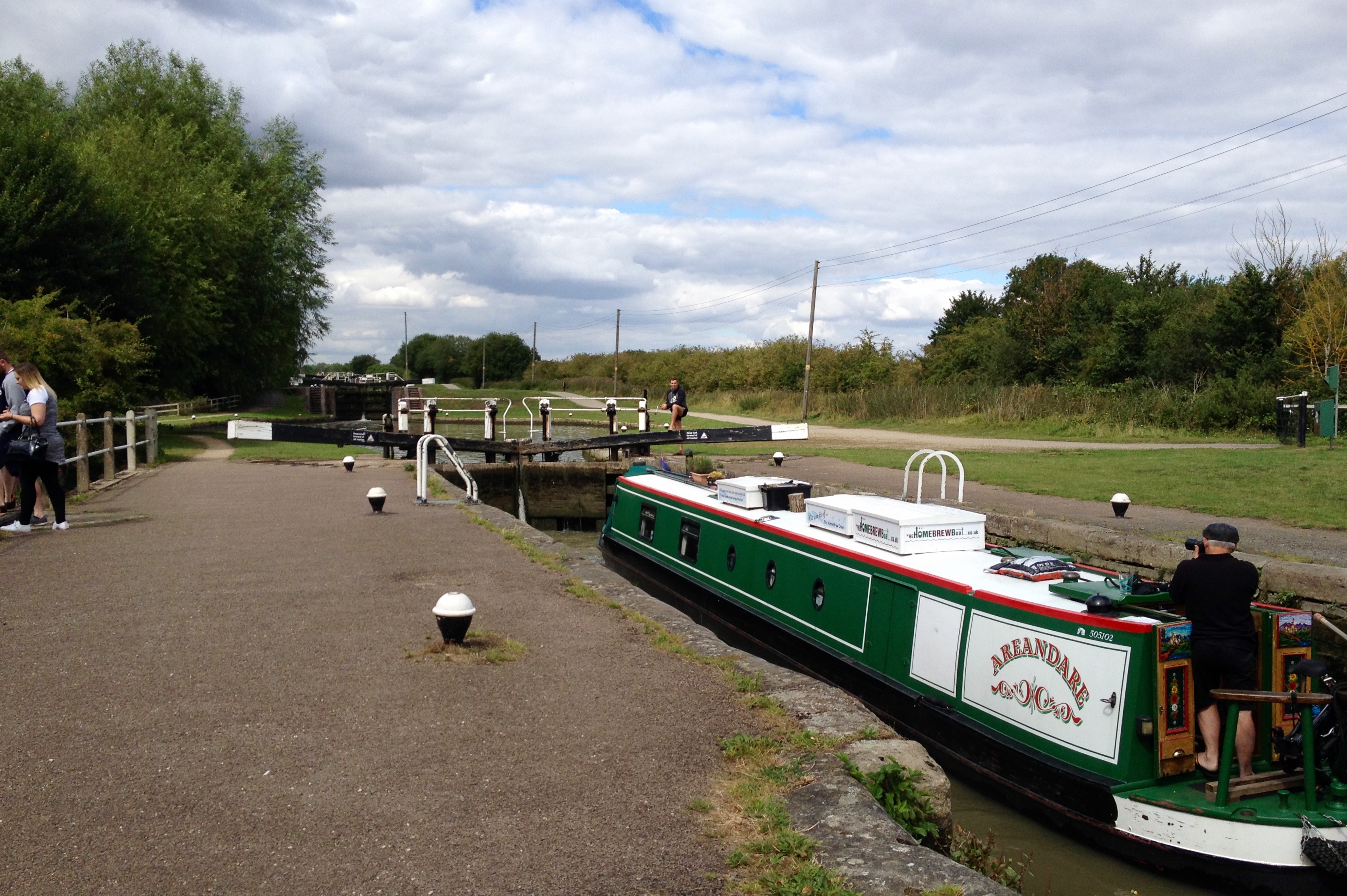 The last time we moored at Stoke Bruene was on the final leg of our 2010 trip. There was frost on the roofs of the boats in the morning, and very few people around.

We’d enjoyed a couple of drinks at The Boat one evening, relishing roaring open fires in each of the bars. 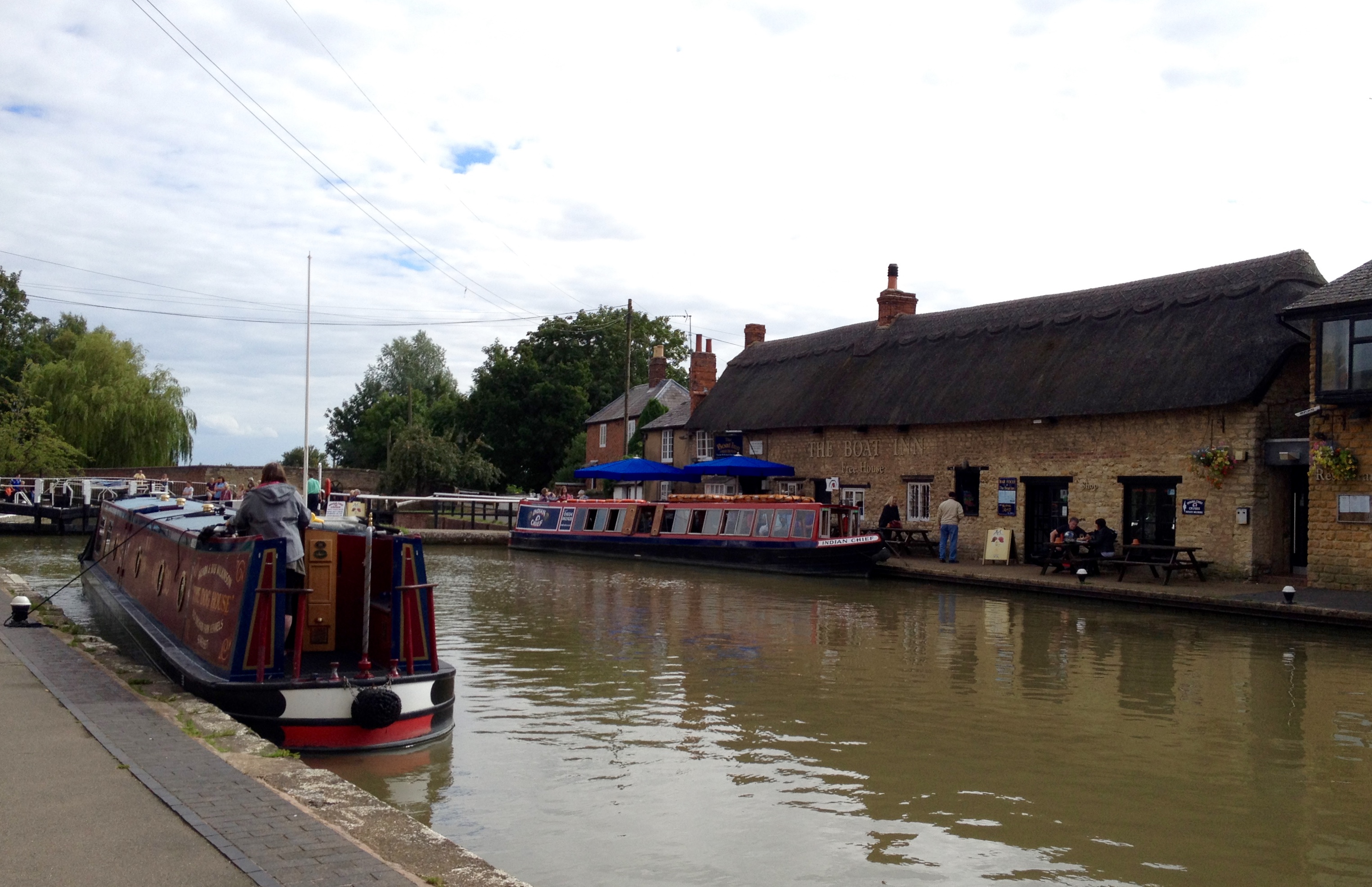 In the height of summer the surroundings of the historic area, and the pub, were a complete contrast.

Walking around in the daytime, on our way to Blisworth Tunnel we met Ronni and Yogi again who’d moored up that morning for a spot of opportunistic towpath trading. Barry took a couple of great shots of them both – if you’re reading we’ll feature you in a future post as it takes too long to wait for him to upload them! 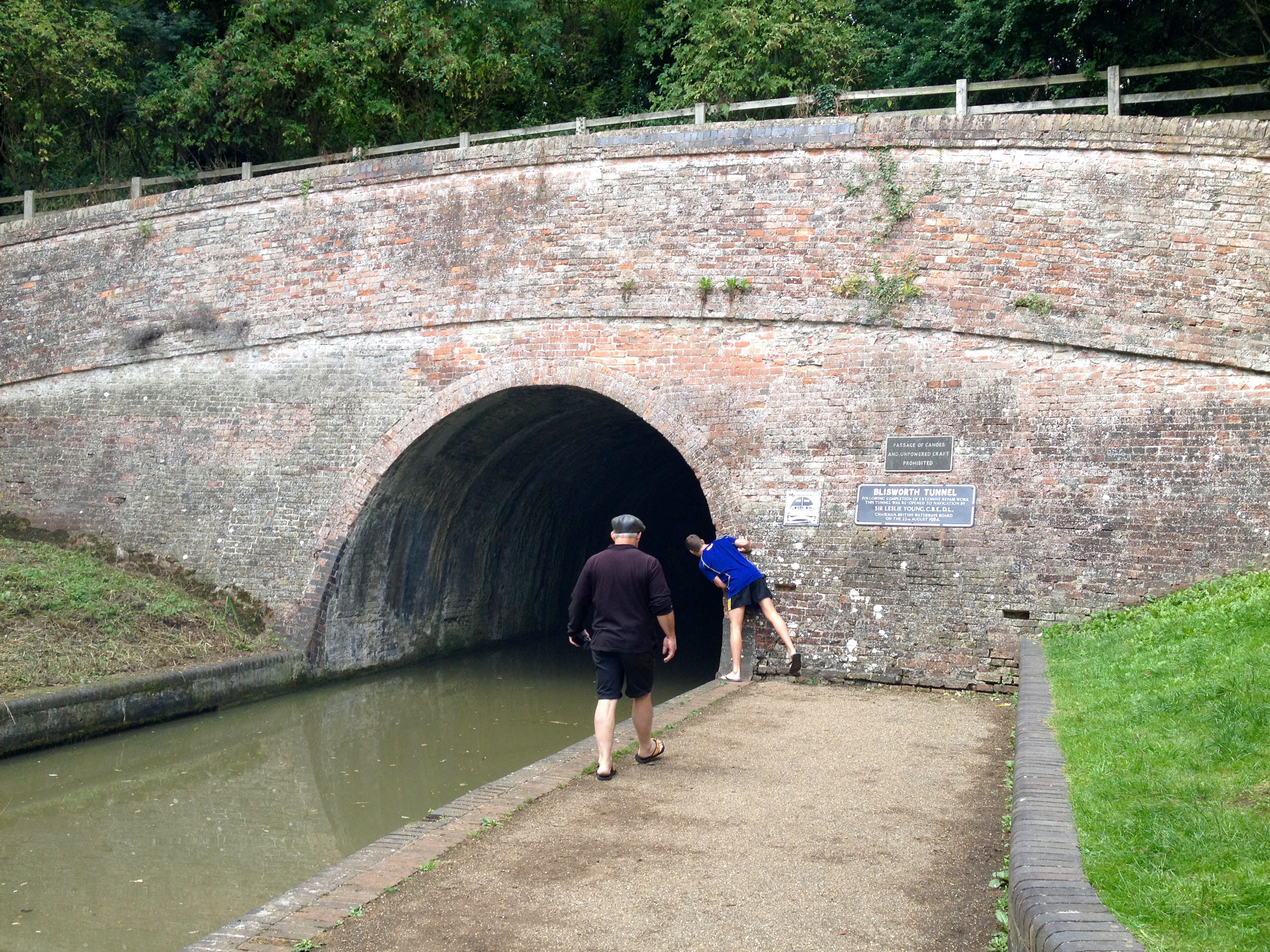 Blisworth Tunnel – how far is the boat we can hear away? Josh can just about spot it in the distance …

Beginning in May 1793, and taking twelve years to complete, the 2.8km long Blisworth tunnel is reported to be the longest self-navigable canal tunnel on the system. It’s the third longest operational canal tunnel in Britain, after Standedge (5.2km long) and Dudley (2.9km). These two tunnels however aren’t self-navigable. 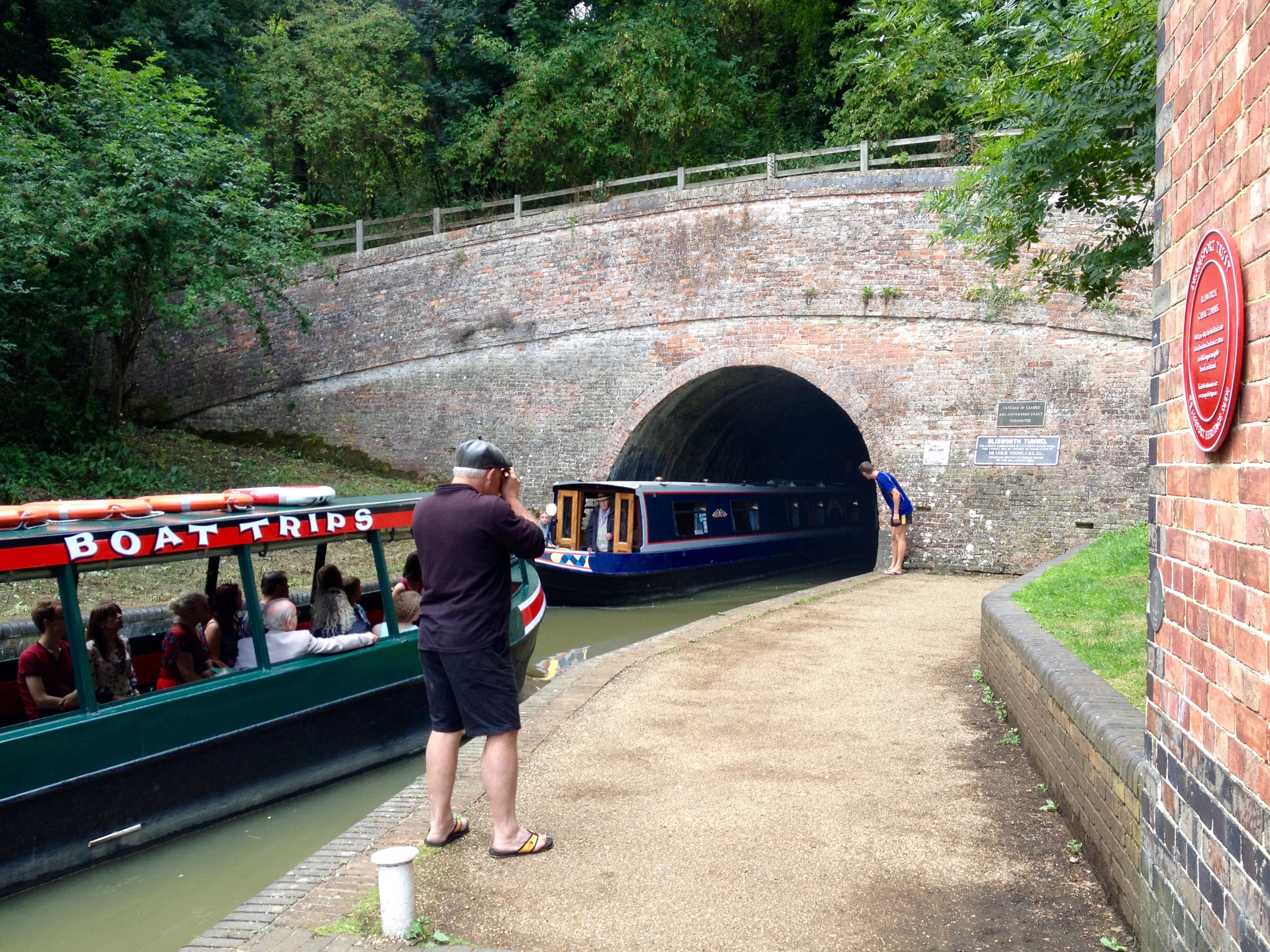 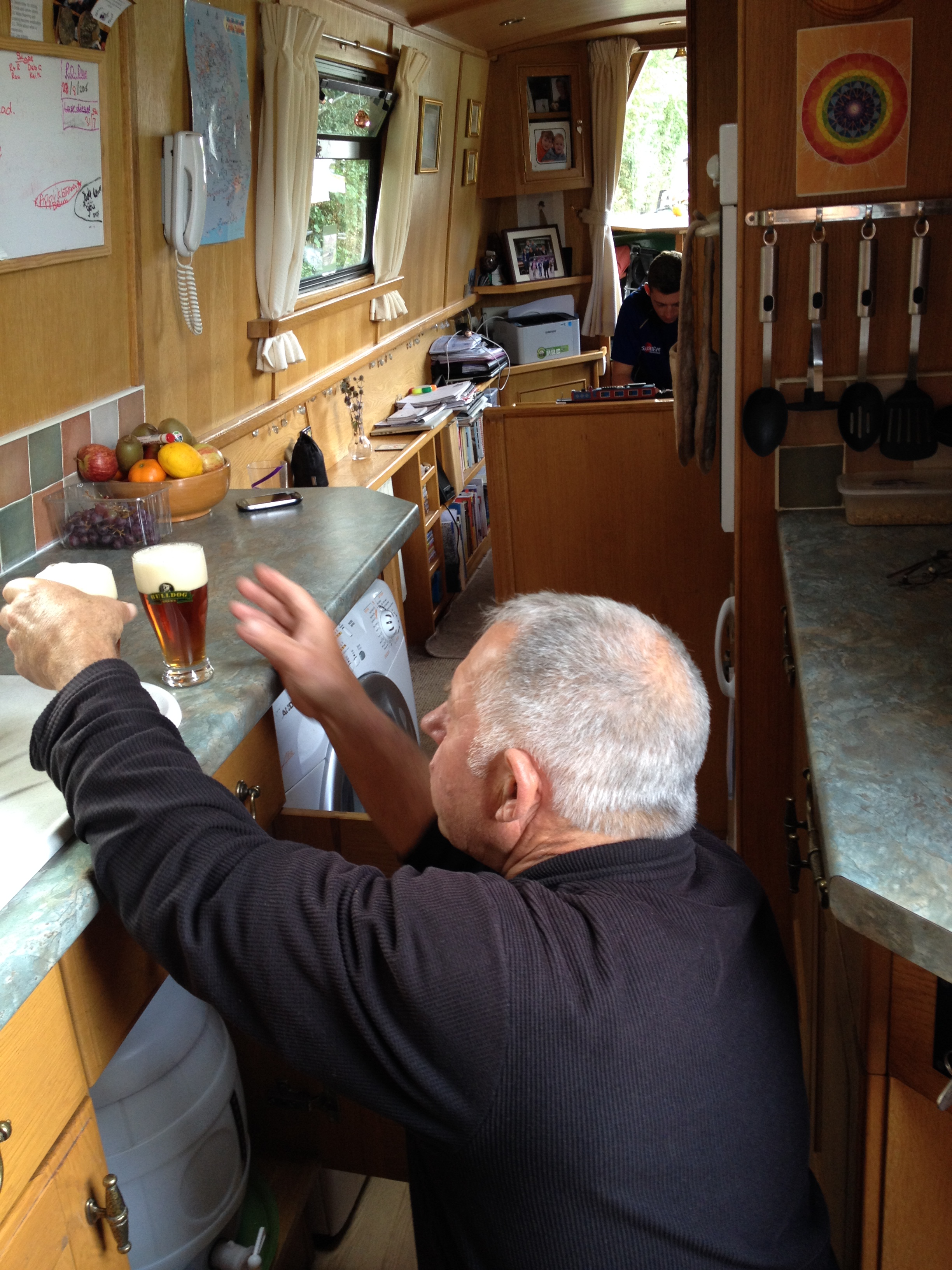 Barry pours a couple of half of home brew beer from his pressure barrel under the kitchen sink!

Wanting to give Josh a taste of a real English pub, we walked up to The Boat after tea. This quaint establishment has been in the same family, the Woodwards, since 1877.

We’d spotted the back room skittles game in 2010, and thought we’d give it a go this visit.

I commandeered one of the bar staff to give us a quick overview of the rules, and we sort of understood – at least we thought we did!

After about half an hour, a group of eight men arrived and asked whether it would be okay for them to join us in a game. We were overjoyed they’d come as, to be honest, we didn’t really have a clue what we were doing!

It turned into one of those magical, memorable, unexpected nights of hilarity. One of the multitude of things we love about our chosen lifestyle is the fun of such evenings. They’re priceless. 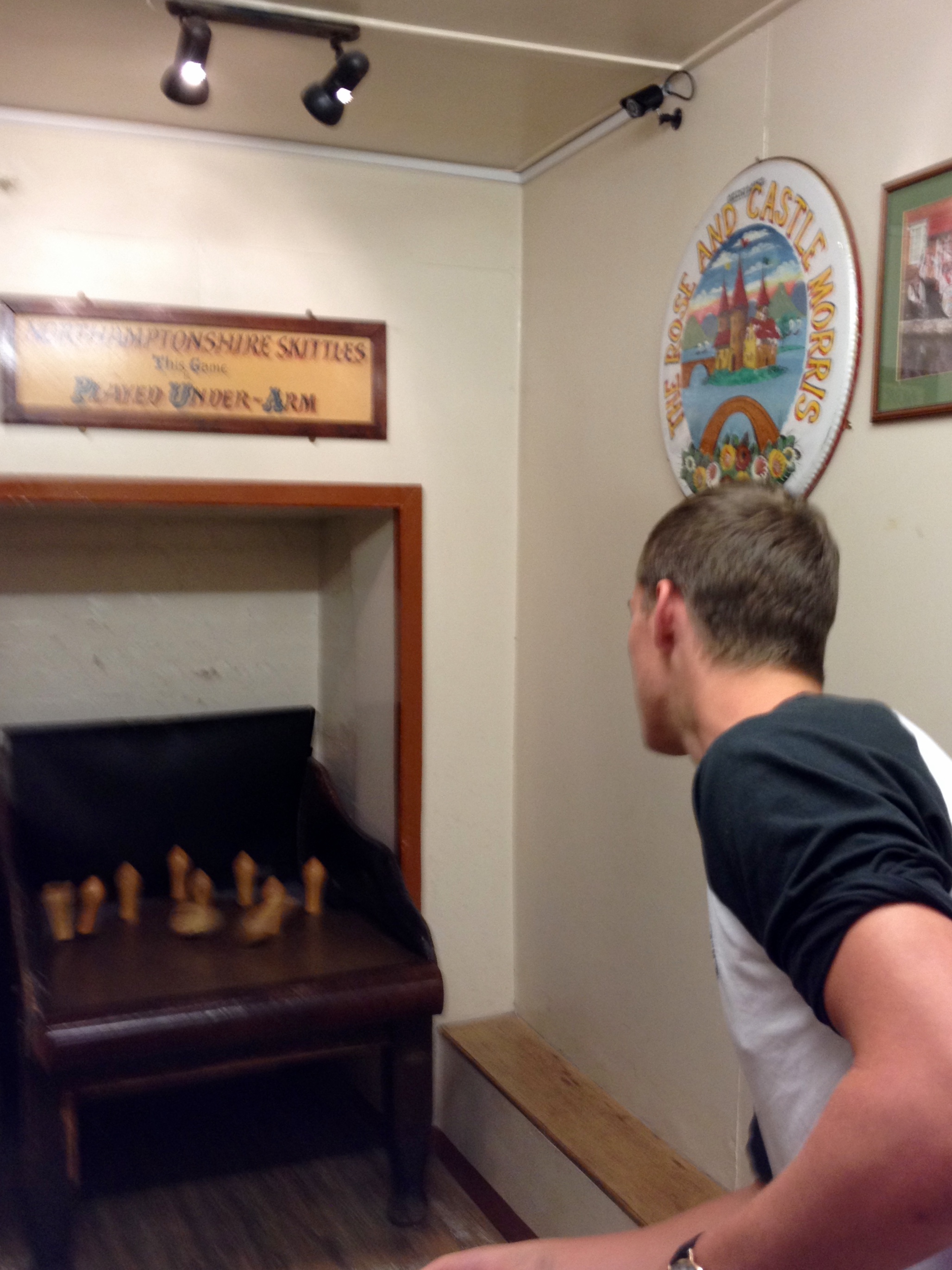 Josh gets to grip with the game 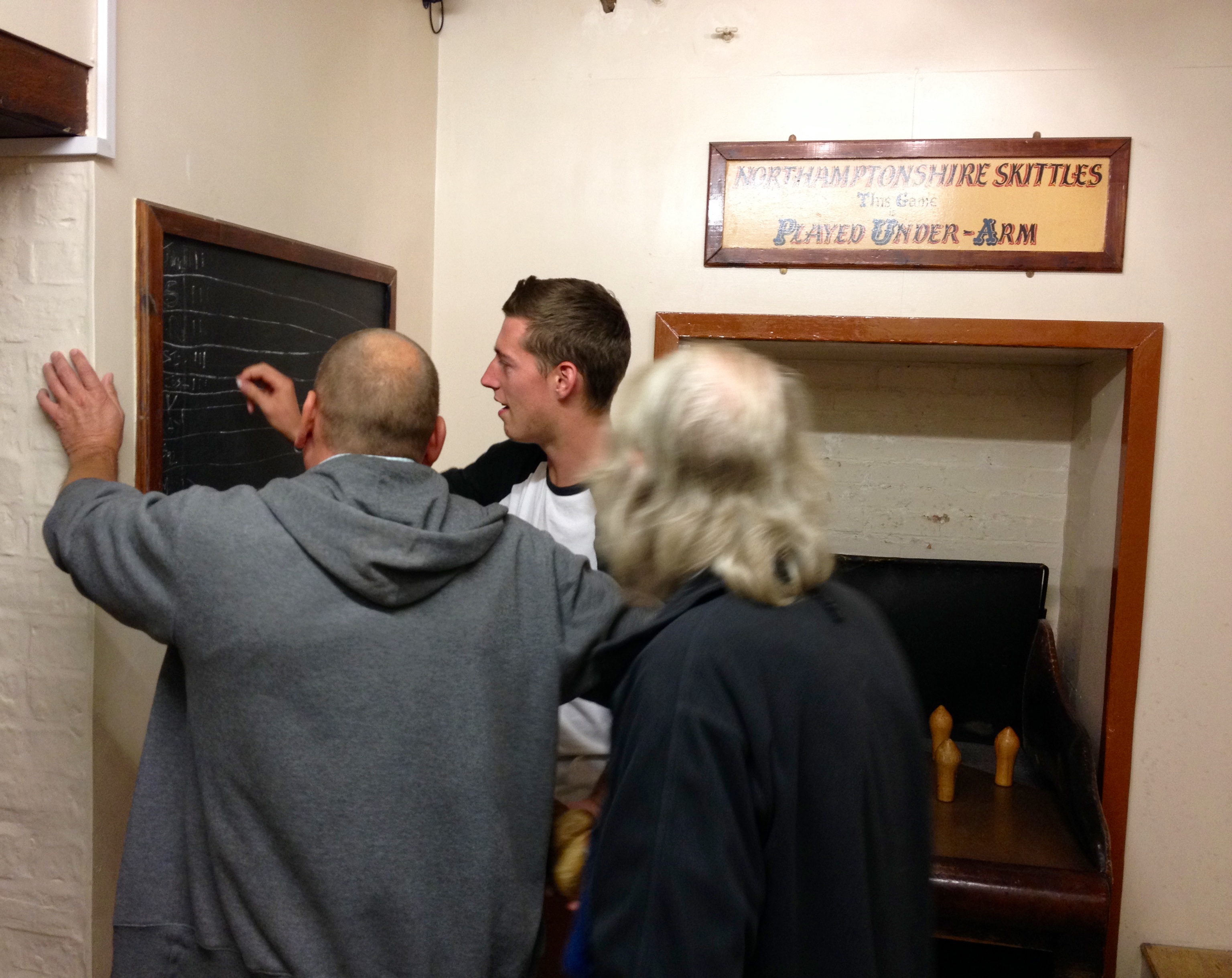 Learning the real way to play skittles from some seasoned players

With an age range from late twenties to probably early sixties, they were a diverse bunch of blokes. I never quite managed to extricate from them how they knew each other or how they hooked up for a weekend on a narrowboat from Hemel Hempstead, but boy they knew how to have fun.

And importantly, they knew the rules of Skittles! 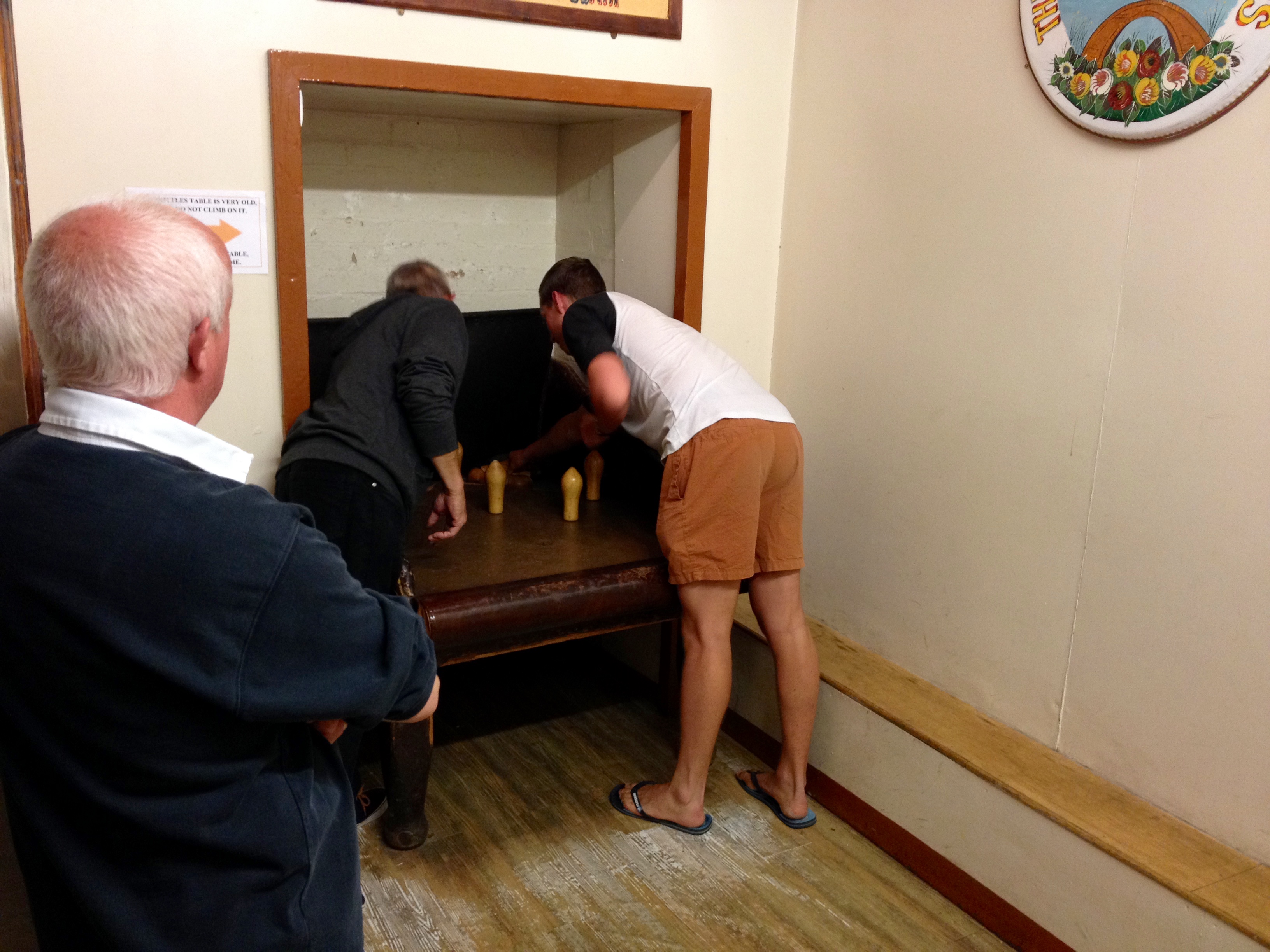 Once you’ve knocked over your skittles (if you’re skilful!), you have to pick them all up again and replace in their allocated spots for the next person – nothing like the computer games of the 21st century thank goodness! 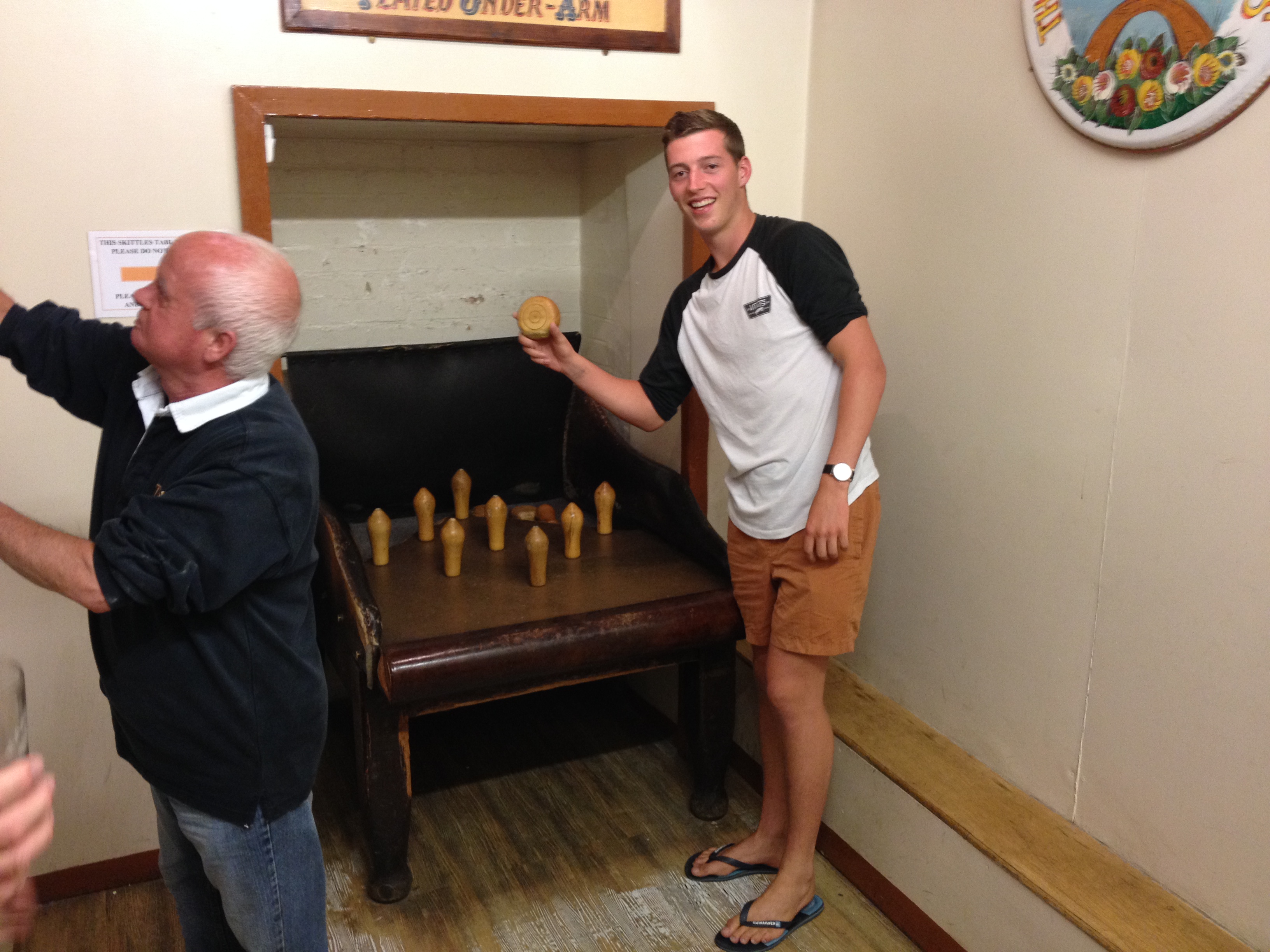 Josh and his winning ‘cheese’! 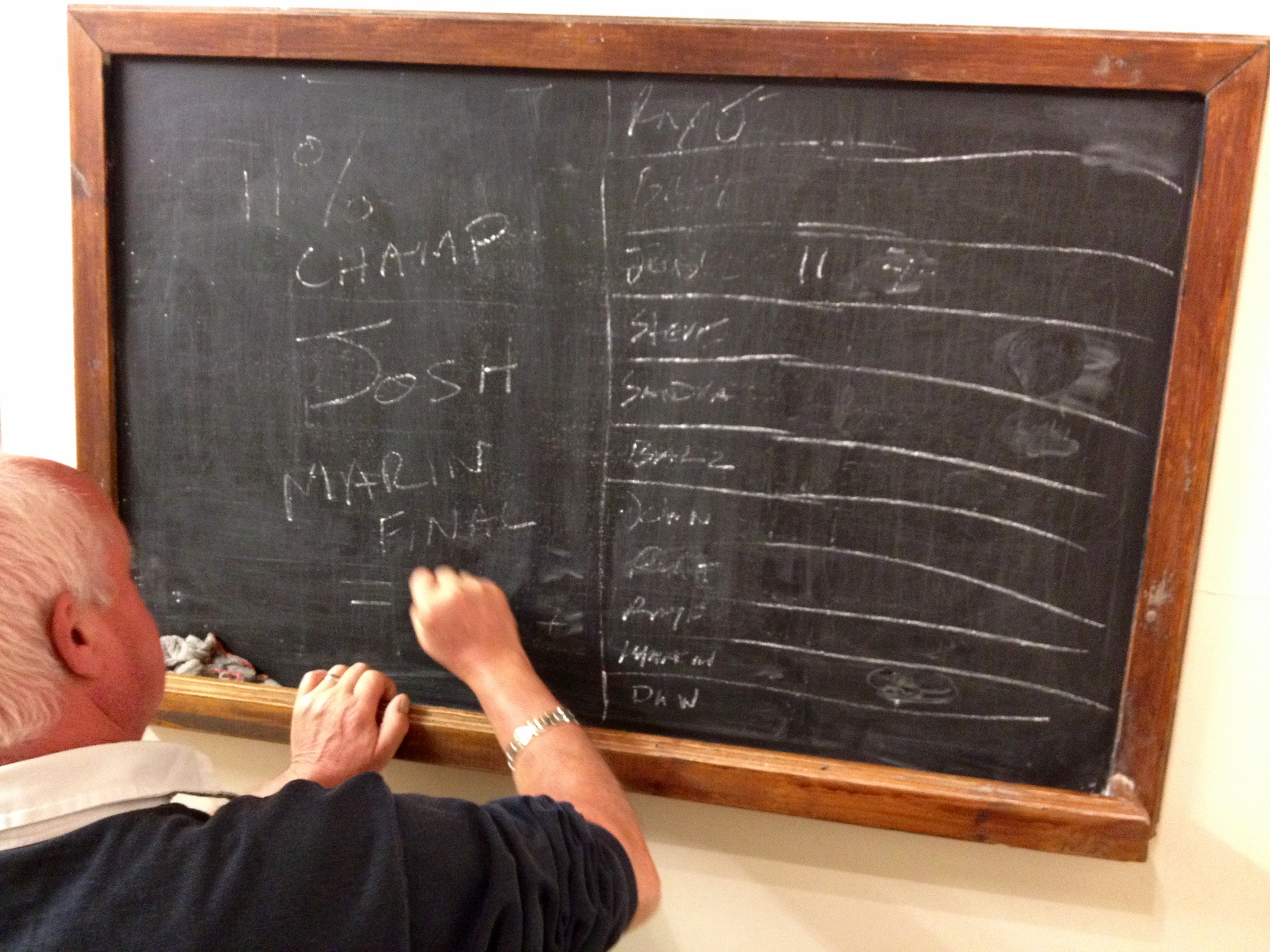 Josh is the champ and still has two lives left! 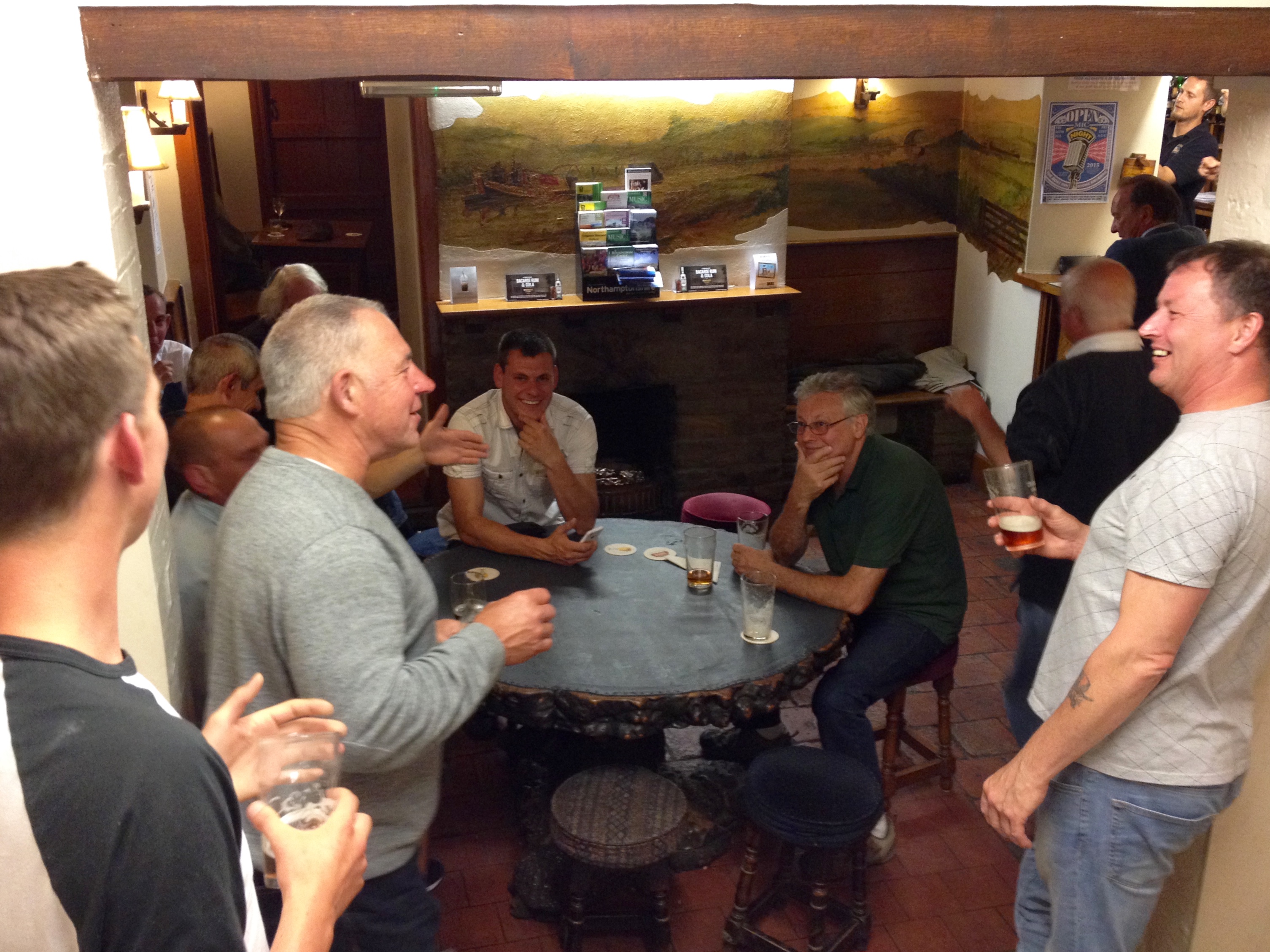 Some hours later, and in the third round with eleven players, Josh was the shining star and won the final game. He’d been splitting his sides with laughter at some of the shenanigans of the group – and Barry was in fine form too having began the evening with a couple of Black Sambuccas with Yogi!

Never one to miss a trading opportunity …

This morning the I fed the boys (just the two of them!) a full English breakfast to assuage their respective hangovers – in readiness for the 17 locks of the day! 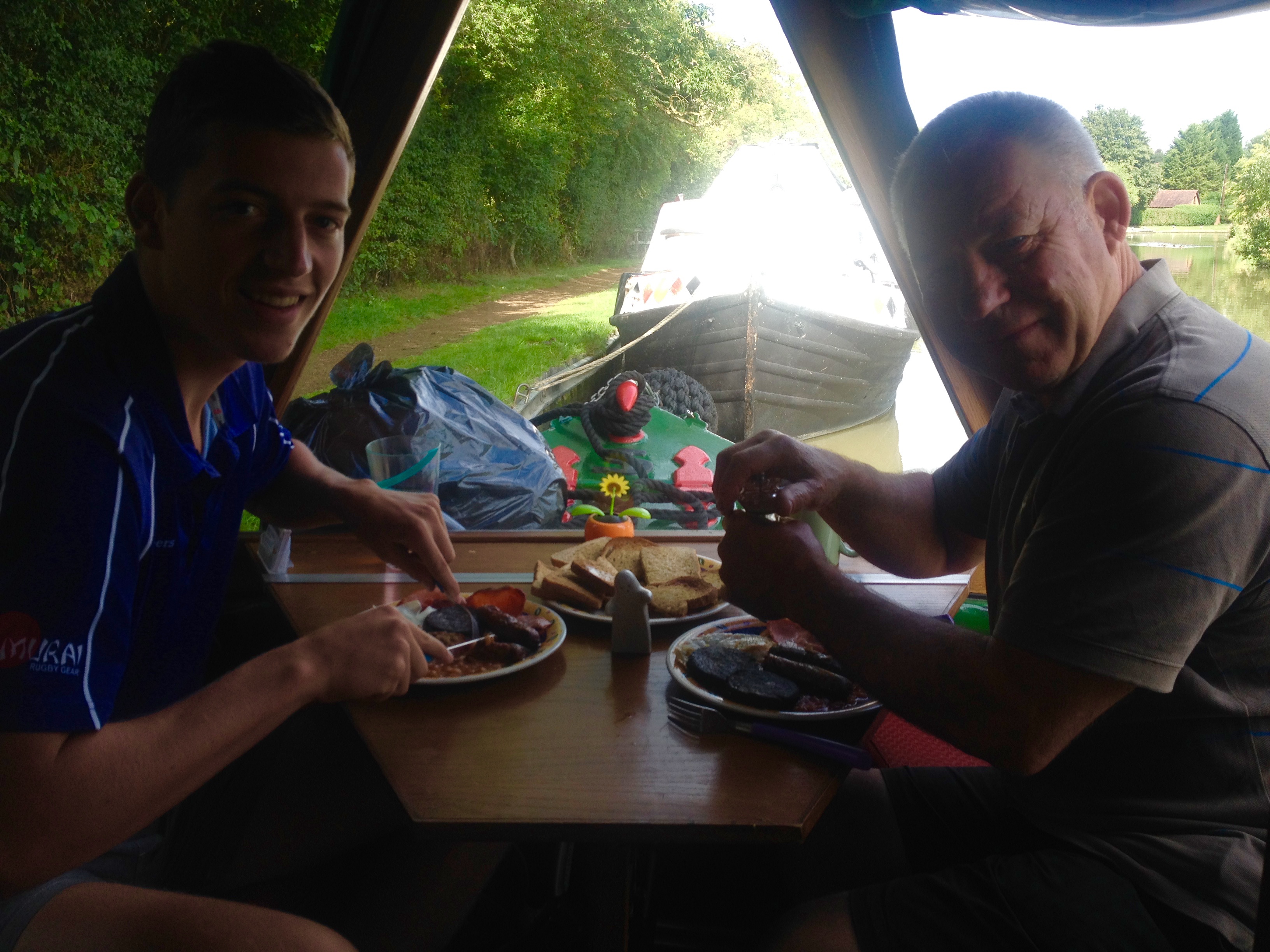 A full English – Josh even had his first taste of Black Pudding – we didn’t tell him what it was made of until he decided he quite liked it! 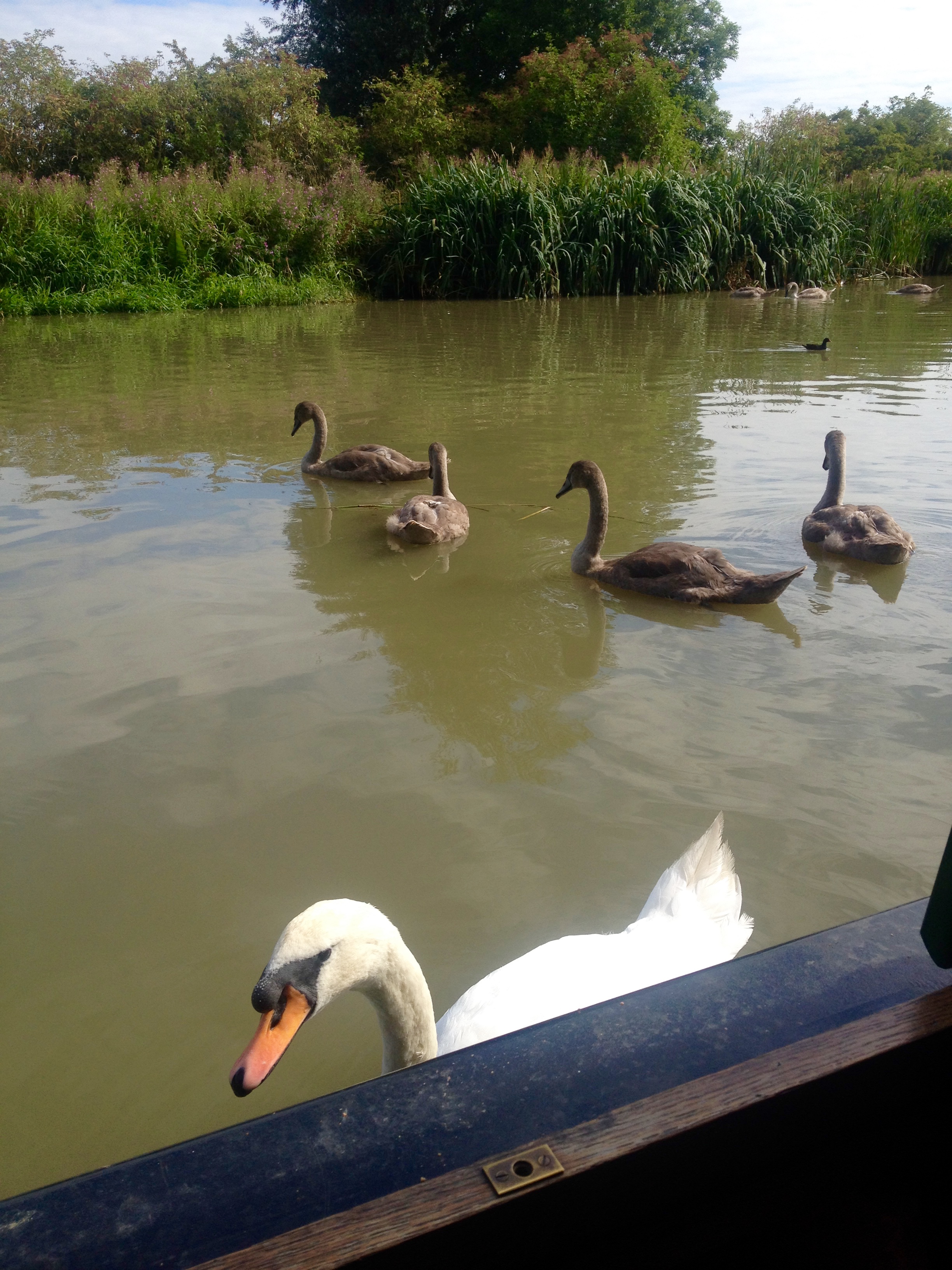 A few more visitors to the boat

With full stomachs they walked along the canal to the boat containing the Skittles crew – who then funnily enough, after chatting to a sober Barry, came to The Home Brew Boat for some sampling and ended up buying a few mixes. 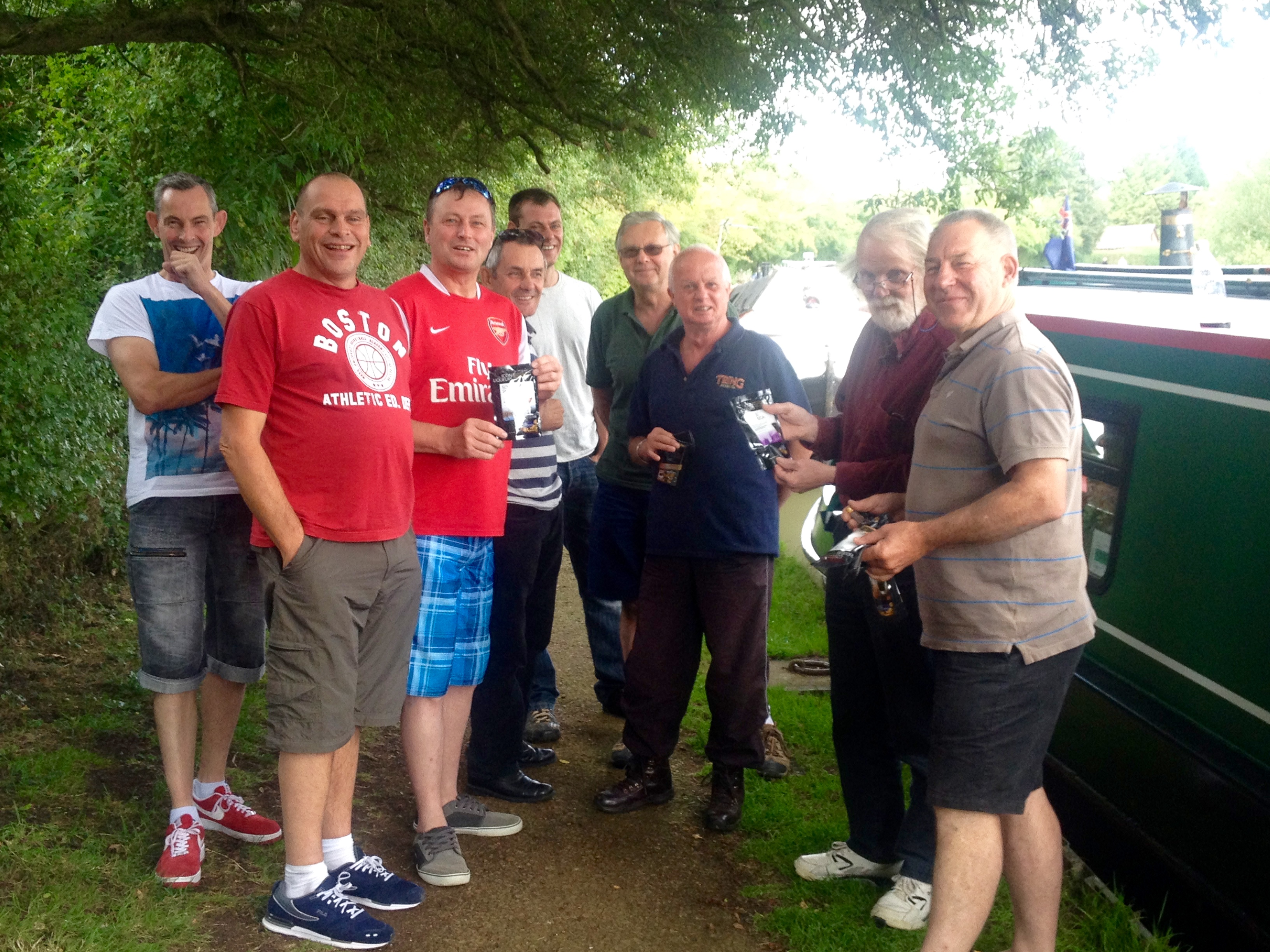 Not necessarily in the right order – Ray (junior), John, Billy, Martin, Dan, Ray (senior), Vaughn and Steve get some sales talk from the Home Brew Crew

Fantastic to meet you all – don’t work too hard next week!

Venturing into virgin territory – for us

We’ll be in Northampton later today, having travelled onto a new stretch of canal for Barry and I. Josh is with us until tomorrow, so I’m sure there’ll be more to post next week. 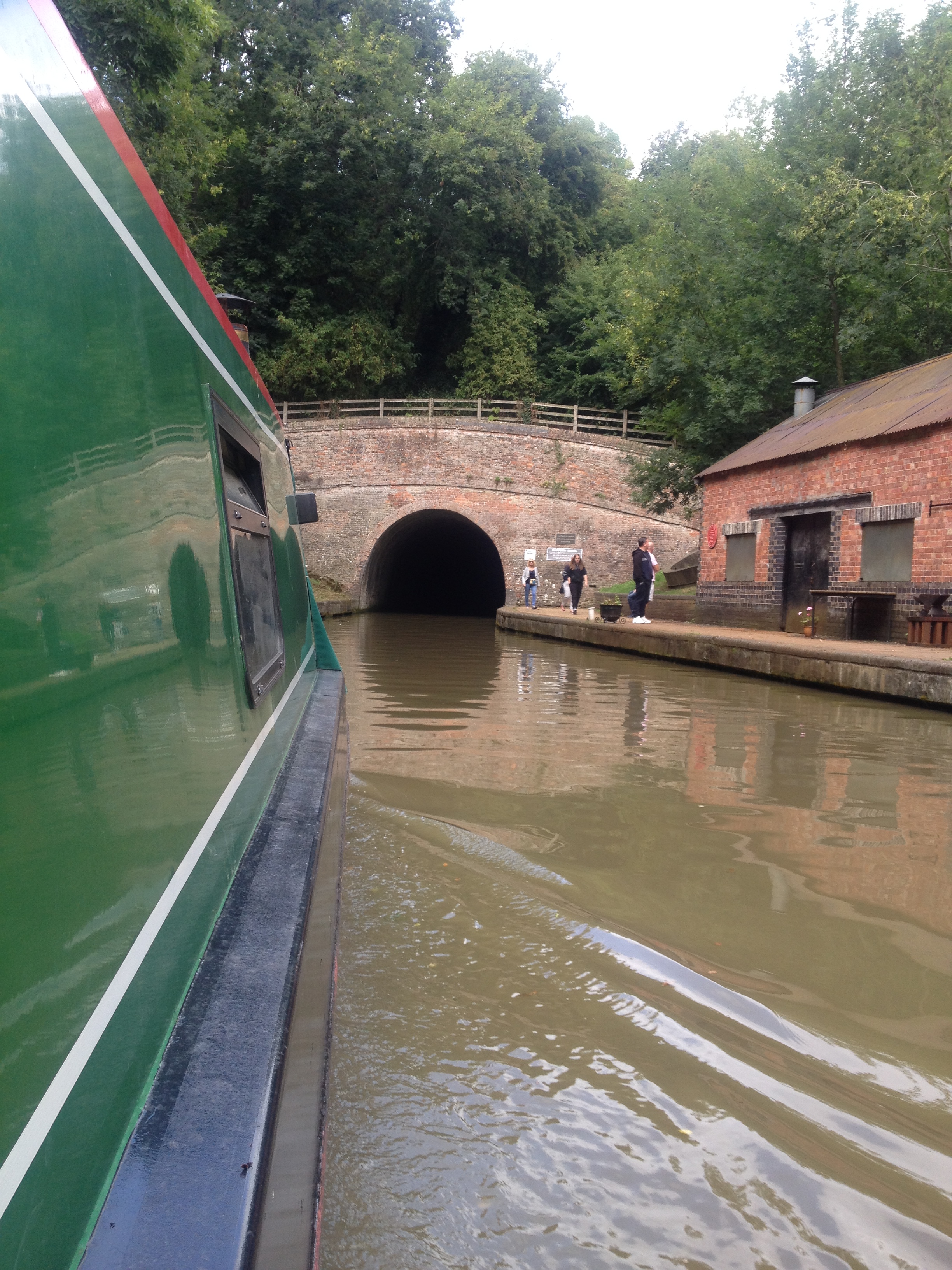 Into the mouth of the tunnel …