We’d heard tales of the fabulousness of Blisworth Canal Festival via Helen and Andy, aka ‘Wild Side’, who’d regaled us with tales of their annual experiences over their past few trading years.

Sadly we weren’t able to make it in 2014. The logistics of travelling from Hebden Bridge, where we were for the Tour De Yorkshire in July, to Blisworth, by narrowboat, made it totally impossible.

Thankfully we ensured the sixth consecutive annual event was part of our 2015 itinerary.

Our late arrival (sorry folks) on Friday afternoon meant we didn’t enjoy as much time with fellow traders who’d had the good sense to get there a few days earlier. Our reason being running a Home Brew Boat business obviously entails picking up stock and delivering orders whilst continuously cruising.

Mostly it works smoothly, without hiccups.

However last week Barry had a bit of bother finding a courier drop off point en route. So he left me stranded at The Wharf at Bugbrooke, with half a lager and my MacBook, to await a DPD delivery. Meanwhile he retraced his journey to Weedon Bec to drop off two parcels to customers at the One Stop shop there!

Unsurprisingly every day is different living as we do as ‘water gypsies’. We wouldn’t swap it for anything for the foreseeable future – that’s if Barry succeeds in his spousal sponsored UK visa quest second round in October!

We had an amazing weekend, and I thought I’d share some of our highlights.

In no particular order …

1/ We got to catch up with many fellow traders – and meet some new ones! Ronni and Yogi and Bob and Sandra, who we hadn’t spoken to for over a year, Heather and Tony we last made contact with at Middlewich FAB, many more regulars too – and I met Louise Yeoman who has recently began a business on her boat called ‘The Therapy Boat’ having qualified as an NLP Practitioner (Neuro Linguistic Programming if you’re wondering – click on this link and it’ll explain more). I had a one-hour session with her a few weeks ago to try and reduce my hay fever symptoms I’ve experienced since 1978. I was rather sceptical, even as someone knowing quite a lot about NLP, but I have to admit since the session I haven’t suffered. Thank you Louise! I also met a fellow facepainter on a narrowboat – Julie Clark on narrowboat Jade. I’d heard about Julie but not been able to ‘find’ her on social media. Fantastic to meet you Julie.

2/ Helen and Andy stayed with us on the Friday night, meaning they didn’t have their usual early start  to drive to Blisworth. They’d booked into a B & B for Saturday night, but it meant we got to see them and thrash them at six-handed-rummy again. I think. Actually I forget who won – to be honest it isn’t really relevant. It’s the experience and the laughs that count – that and the crazy pair bursting frequently into song, singing a line to random hits depending upon the topic of conversation! You maybe have to experience it to understand … 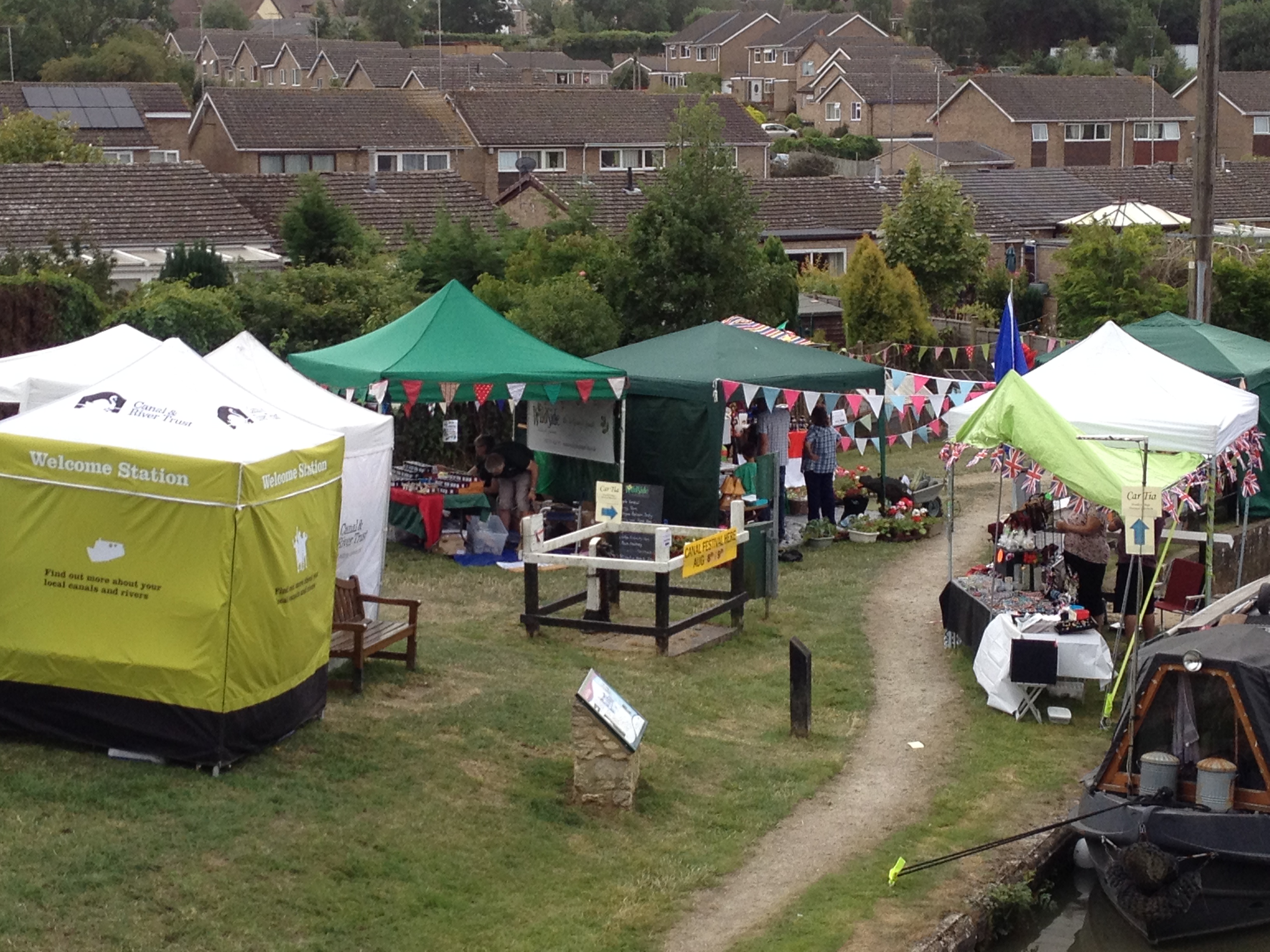 3/ The lovely Jan who I’ve been in contact with intermittently since we booked at the end of 2014. Apologies for being so tardy and not checking my pitch was F70, rather than F7, which is where Andy and I initially erected my gazebo on Friday evening! Some poor trader got a shock arriving Saturday morning to discover someone had invaded their turf! Thank you to whomever helped dismantle and store it in the Blisworth Partnership gazebo until I retrieved it – sadly minus most of the pegs. Thank you again to Jan for lending me some. Apologies, I still have them so let me know if you need them back (she did say she had spares) … 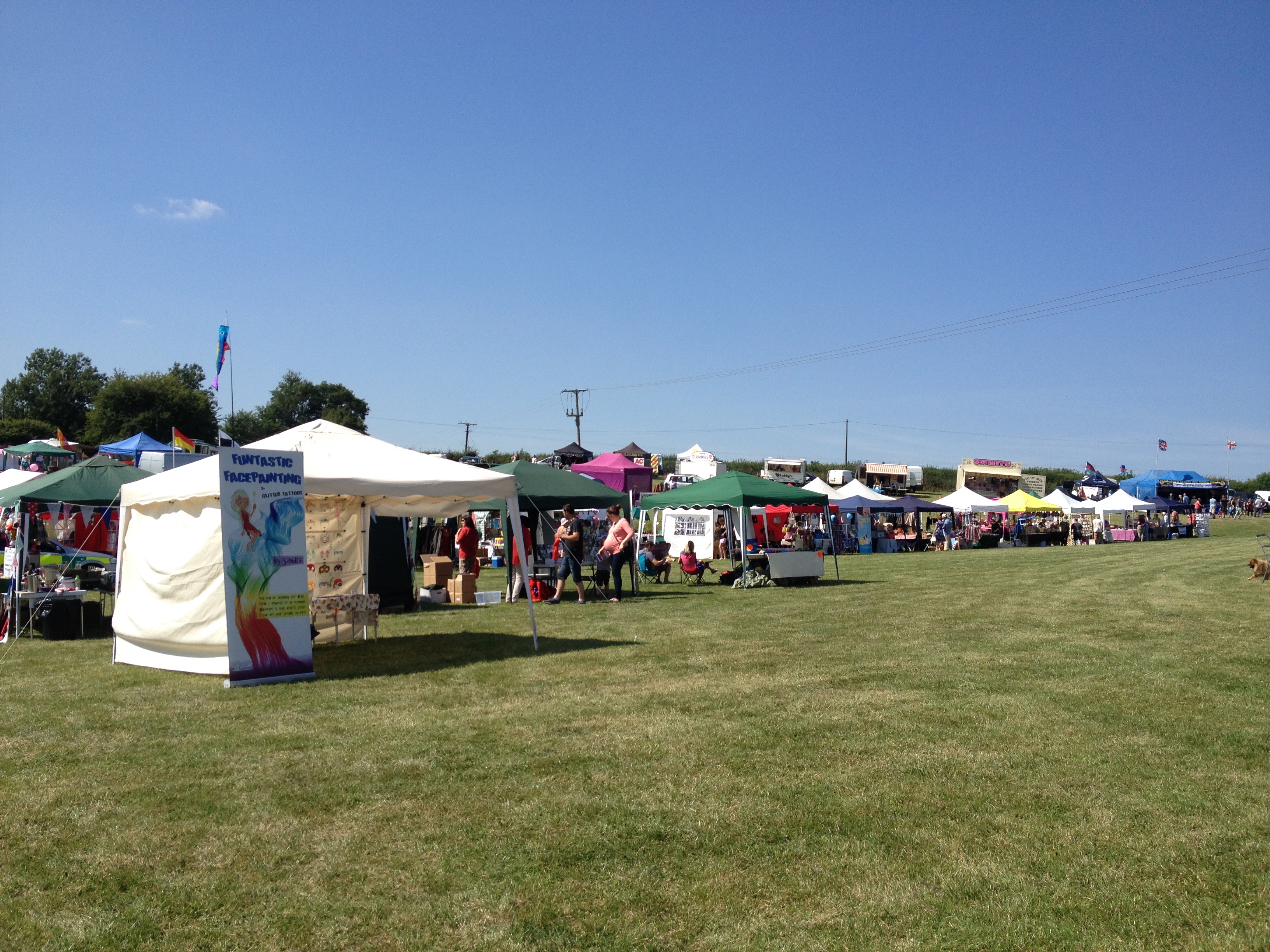 Funtastic Facepainting by Sandra set up in the correct pitch, F70, in the festival field

4/ All the organisers and volunteers at the festival were so helpful and happy. The event is spread around the village of Blisworth, and it felt as though the whole place and its population were behind it. Blisworth Canal Partnership was formed in 2009, by a group of villagers keen to show off and celebrate their section of canal. 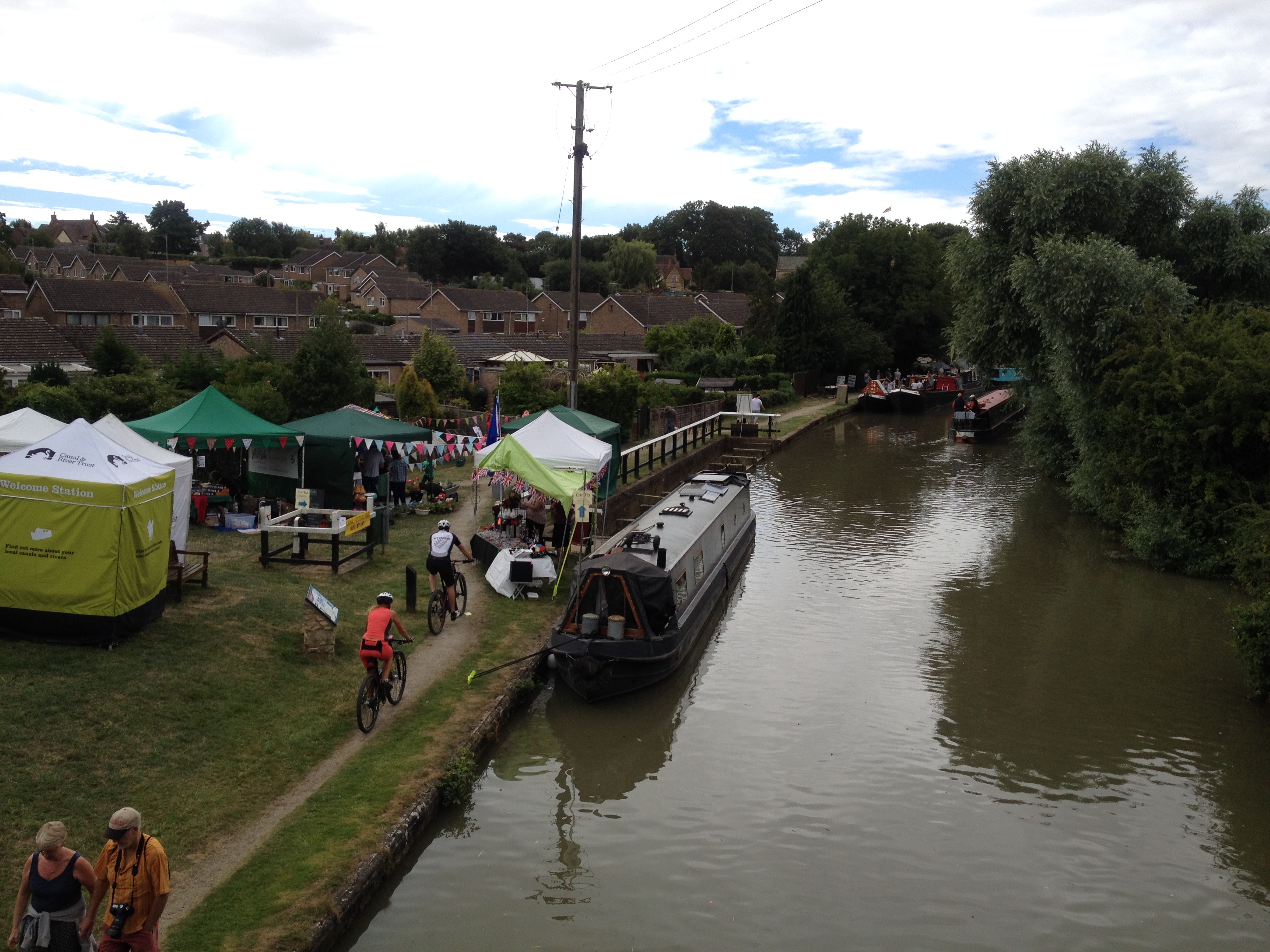 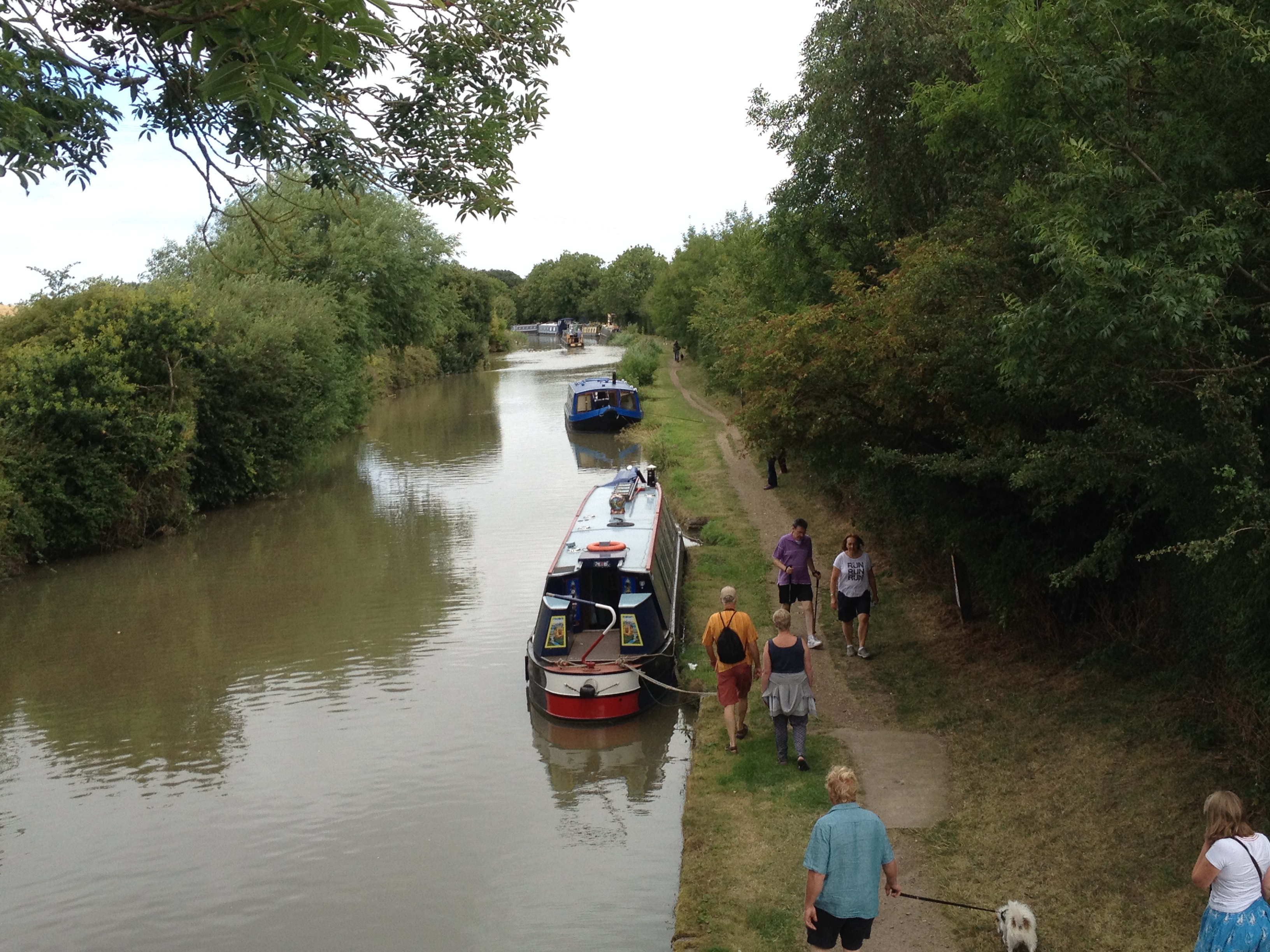 Further along the canal, away from Blisworth, where many traders were moored

5/ The open Mic night on Saturday on the Wharf – we managed to persuade Heather and Tony to extricate their tired bodies from their narrowboat ‘?Sanity’ and come out with us. They’d been planning an early night. A challenge at festivals as a trader, is making sure you get to experience some of the festivities, rather than just ‘working’! We usually find a way … All the proceeds from the bar, food and other fundraising at The Wharf are being given to Great Ormond Street Hospital Charity. How generous is that? Well done lovely people. Oh yes! And the very talented Ronni gave an amazing rendition on her ukulele and sung us a couple of tunes which the crowd adored. It was apparently her first public appearance – let’s hope there’ll be many more. 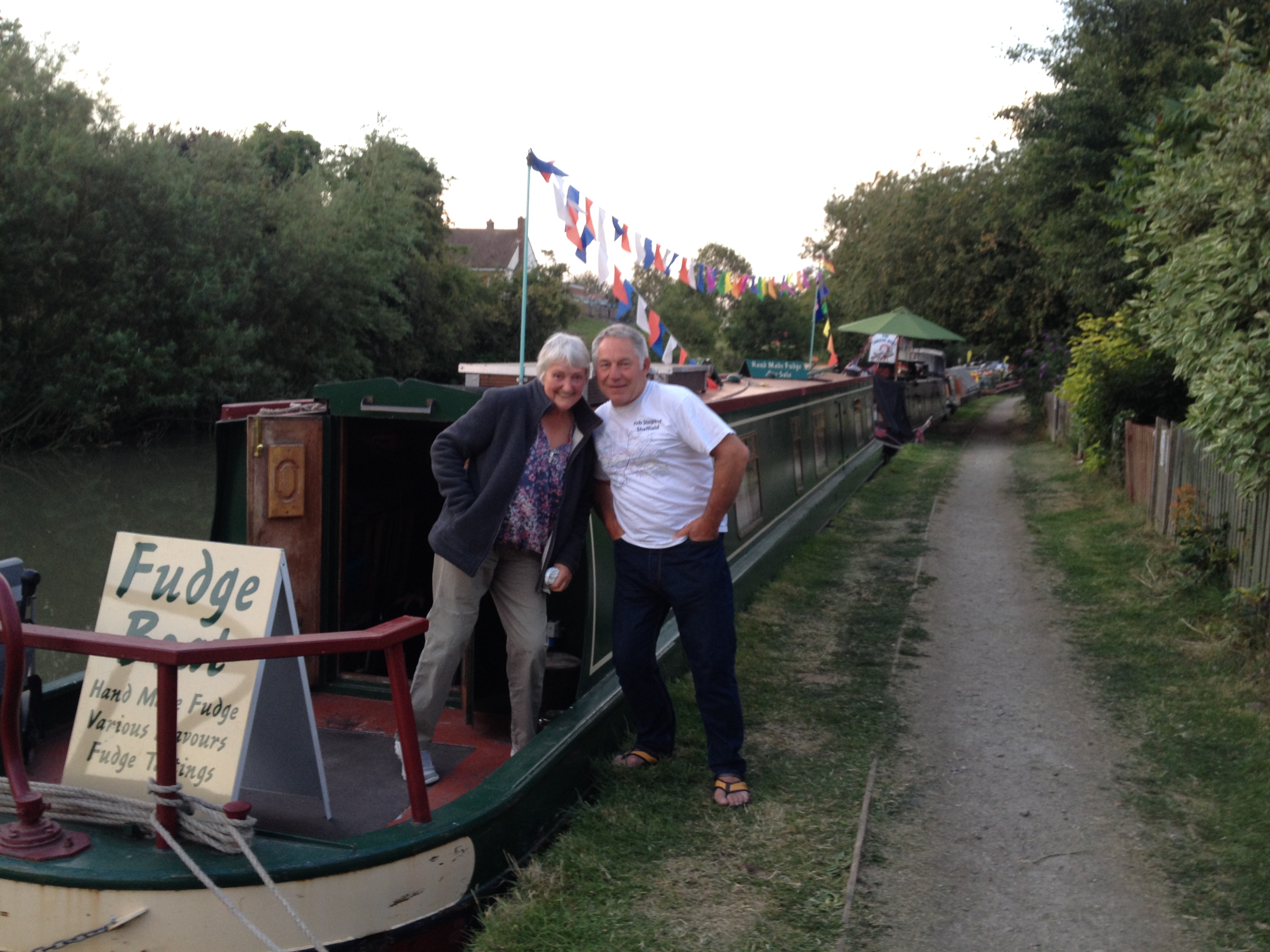 6/ I had my best ever ‘Funtastic Facepainting’ proceeds weekend – each day was a record breaker! My facepainting skills are definitely improving, and I’m getting quicker which is a bonus when there’s a queue – which there was, constantly, from 11.30 to after 5pm each day. Heaps of gorgeous people came to see me, many seeking the advantage of shade under the gazebo and enjoying a well-need sit on the grass. I had a few enquiries for future bookings too, which is always a bonus.

7/ The Home Brew Boat made up for a slow Saturday with heaps of sales on Sunday. Thank you to Yogi for all his word-of-mouth advertising too! 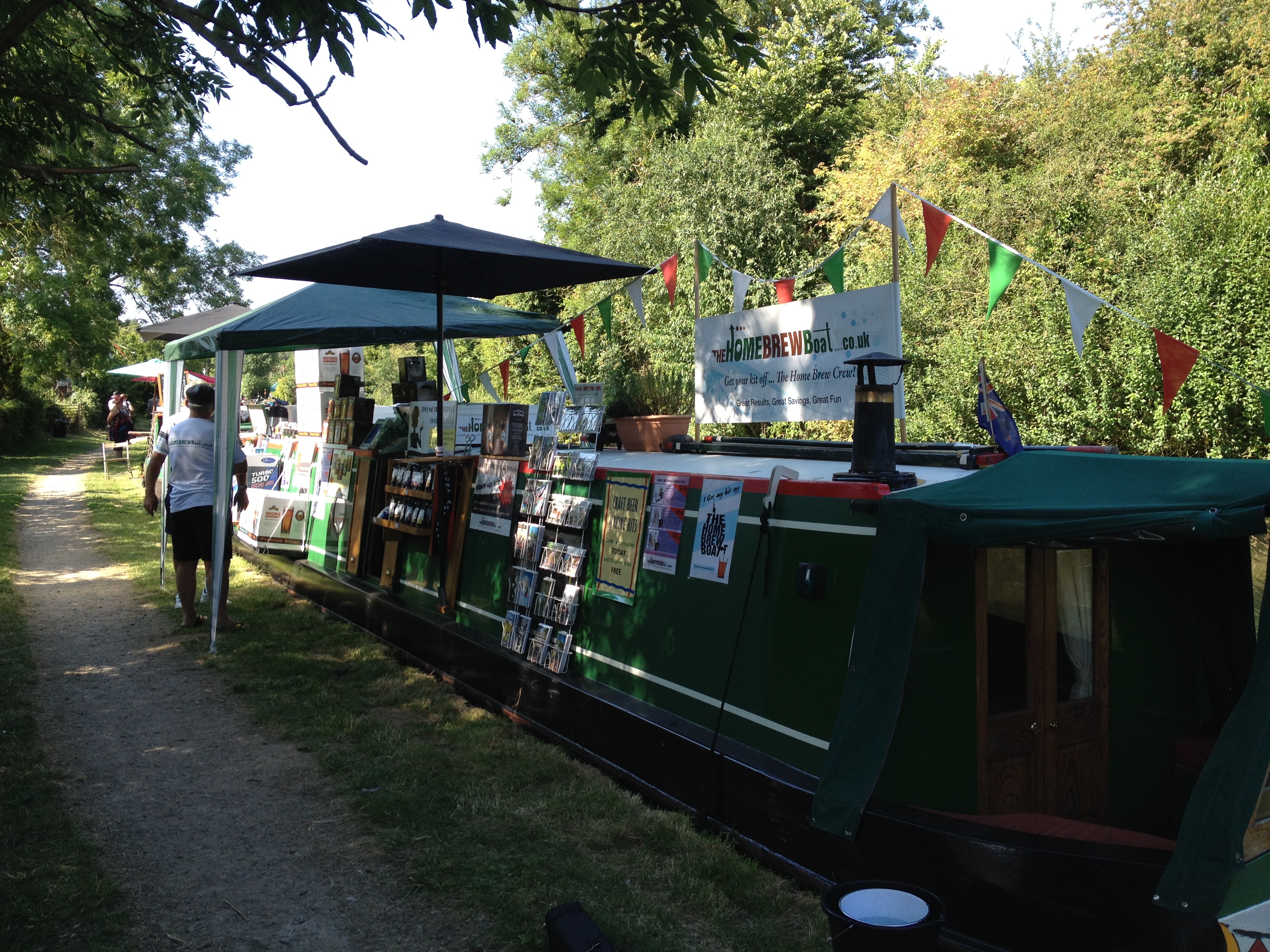 Barry’s ready for the action on Saturday morning 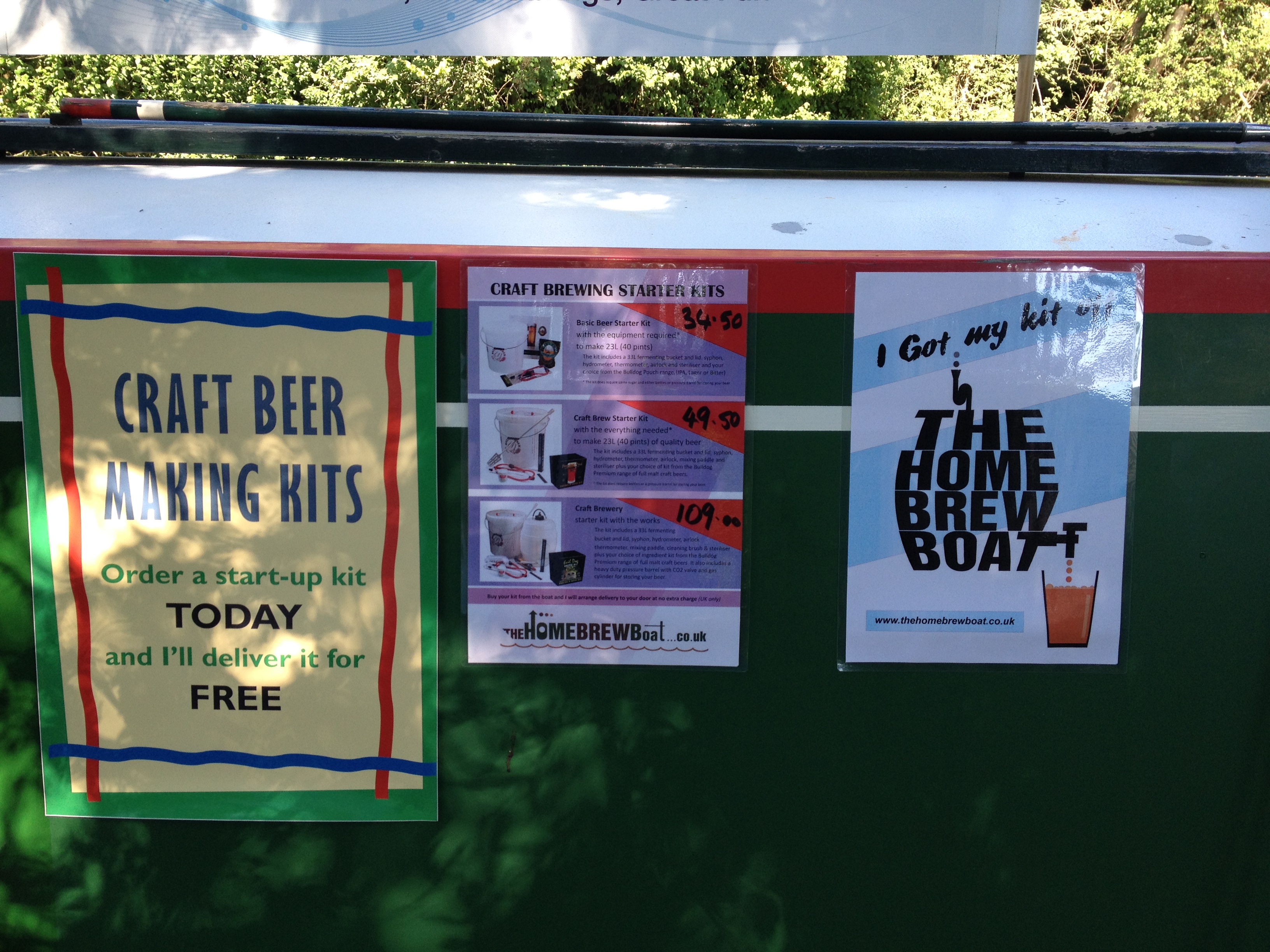 The side of Areandare is almost completely covered in products and posters!

8/ The weather! Now I realise it’s a bit of a boringly monotonous British pastime to moan or celebrate the weather, but when you’re trading in a field, having sunshine rather than downpours makes a measurable difference! Apparently in years gone by rain has put rather a dampener (pun intended) on the event. By Monday, just as we set off in the early afternoon, the heavens opened. So we feel extremely thankful it bided its time …

9/ The World War II re-enacters and the ferret racing! Jan had kindly located me as near to the entrance of the festival field as possible. However the downside was being adjacent to rifles firing loudly at surprising (to me) intervals on Saturday. It meant not only the children sat in my magic chair almost jumped out of their skin as the sound of gunshot filled the air, but also the facepainter was rather unnerved too! I’d purposely positioned the side of the gazebo to hide the trenches they’d dug, but wasn’t able to sound proof it. I’m sure it was fascinating for those prepared and able to watch … Diversely, the raucous announcements before, during and after the half-hour ferret races each day lifted many spirits. I could only imagine the scene as although I was nearby once again, it was hidden from view.

10/ Meeting Ian again, a very pleasant gentleman who we moored behind in Northern Pride, our first narrowboat, in October 2010 – in Blisworth would you believe! I left Barry there for a couple of days when I hired a car to take our belongings from the boat to mum and dad’s, before we moored up at Blisworth Marina for them to sell the boat on our behalf. Barry really enjoyed Ian’s company, and sharing a few beers in my absence, and we’ve kept in touch online intermittently since then. 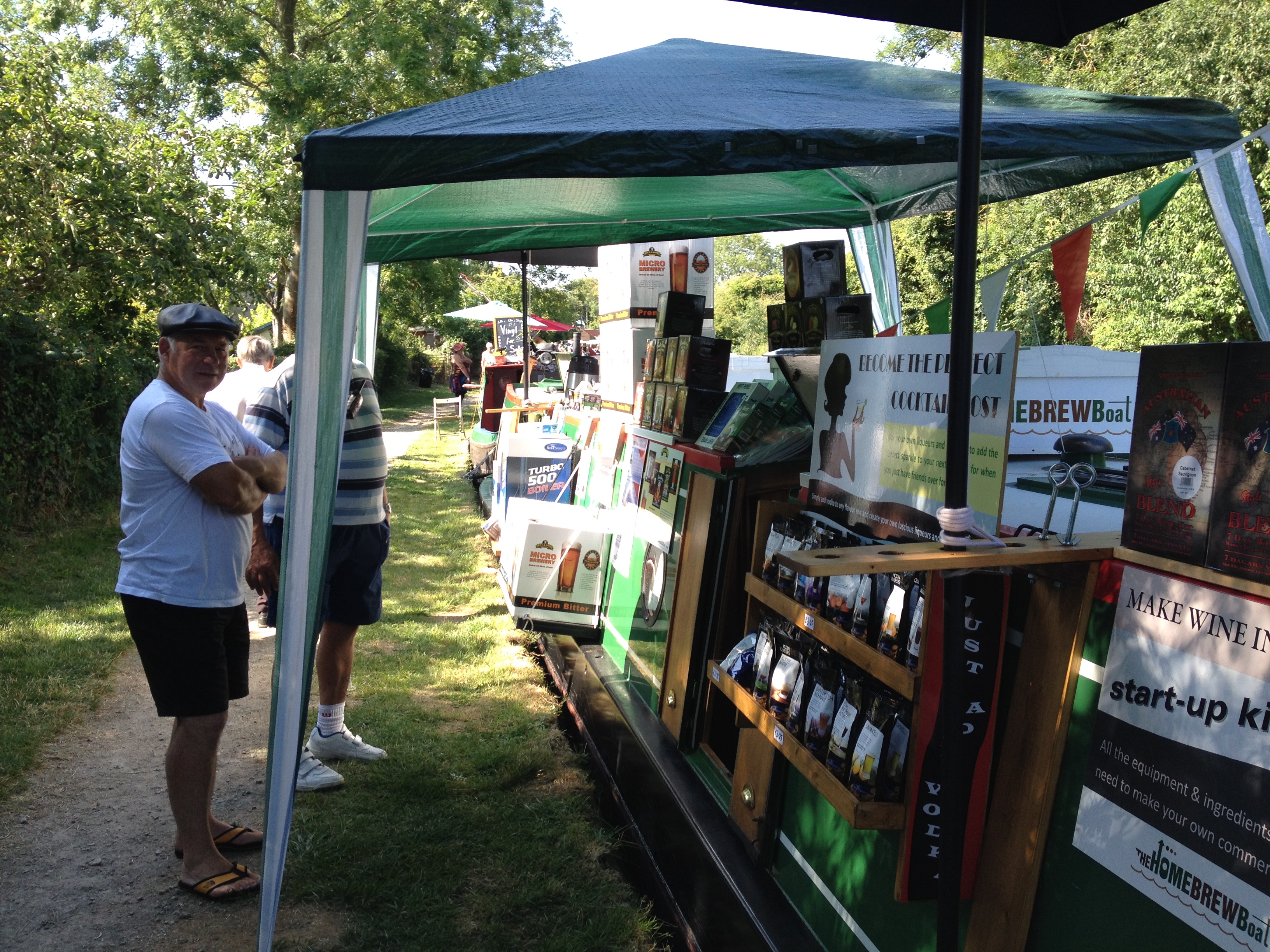 Ian is hidden behind the gazebo leg!

All in all, we had a wonderful weekend that flew by far too quickly. We definitely plan on returning to Blisworth in 2016 – if we’re still here and they’ll have us back!

Another kiwi on board ..

We’re now moored near Wolverton train station, north of Milton Keynes, as a NZ friend’s son is coming to stay on board for a few days. Josh is in England playing rugby for a team in Kent we believe – we’ll get more accurate information once he’s arrived.

Yesterday we walked into Milton Keynes to bank our takings from the weekend at the nearest Barclays Bank – a round trip of over six miles! The things you do as a narrow boating trader …

We’ll be heading back up to Northampton over the next few days, where we’re travelling around for a few weeks, so look out for us anyone in the area.