There are many joys of living the ‘water gypsy’ life on Britain’s Inland Waterways network.

One of them is visiting places you’d never normally consider. They’re off the route you use to go to work, or visit family and friends. And you know little about them apart from their name.

Voyaging on a narrowboat, we have the opportunity to walk into these towns and villages. As we’re repeating many routes we’ve previously travelled, we’re also able to re-visit delightful places and discover more each time.

The Royal Town of Leamington Spa

This is one of the places to surprise me when we first experienced it in summer 2009, on our inaugural six month soiree.

The town reveals an extraordinary mix of cultures, buildings and parks. 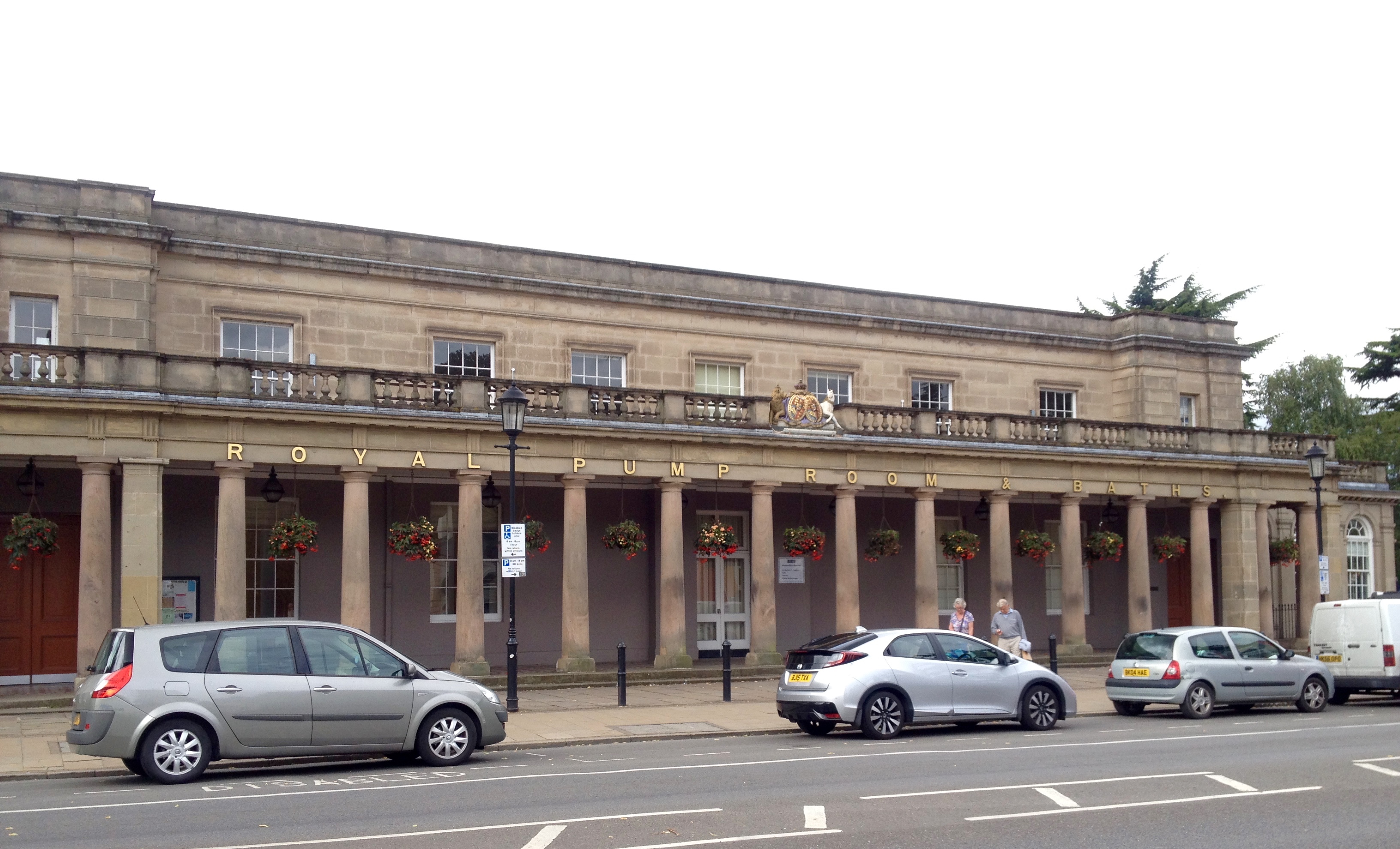 The Royal Pump Room Baths – shame about the cars in the foreground! 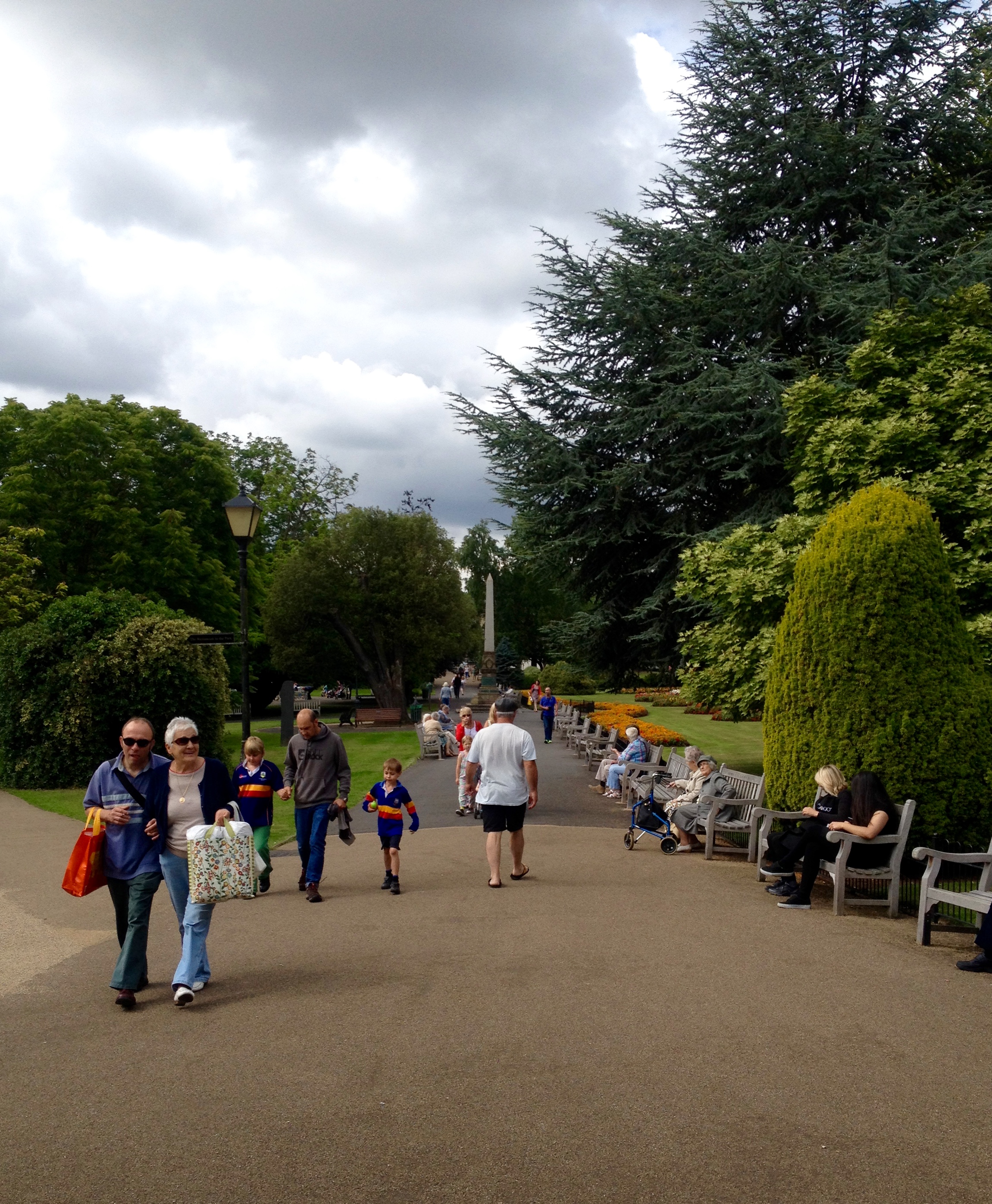 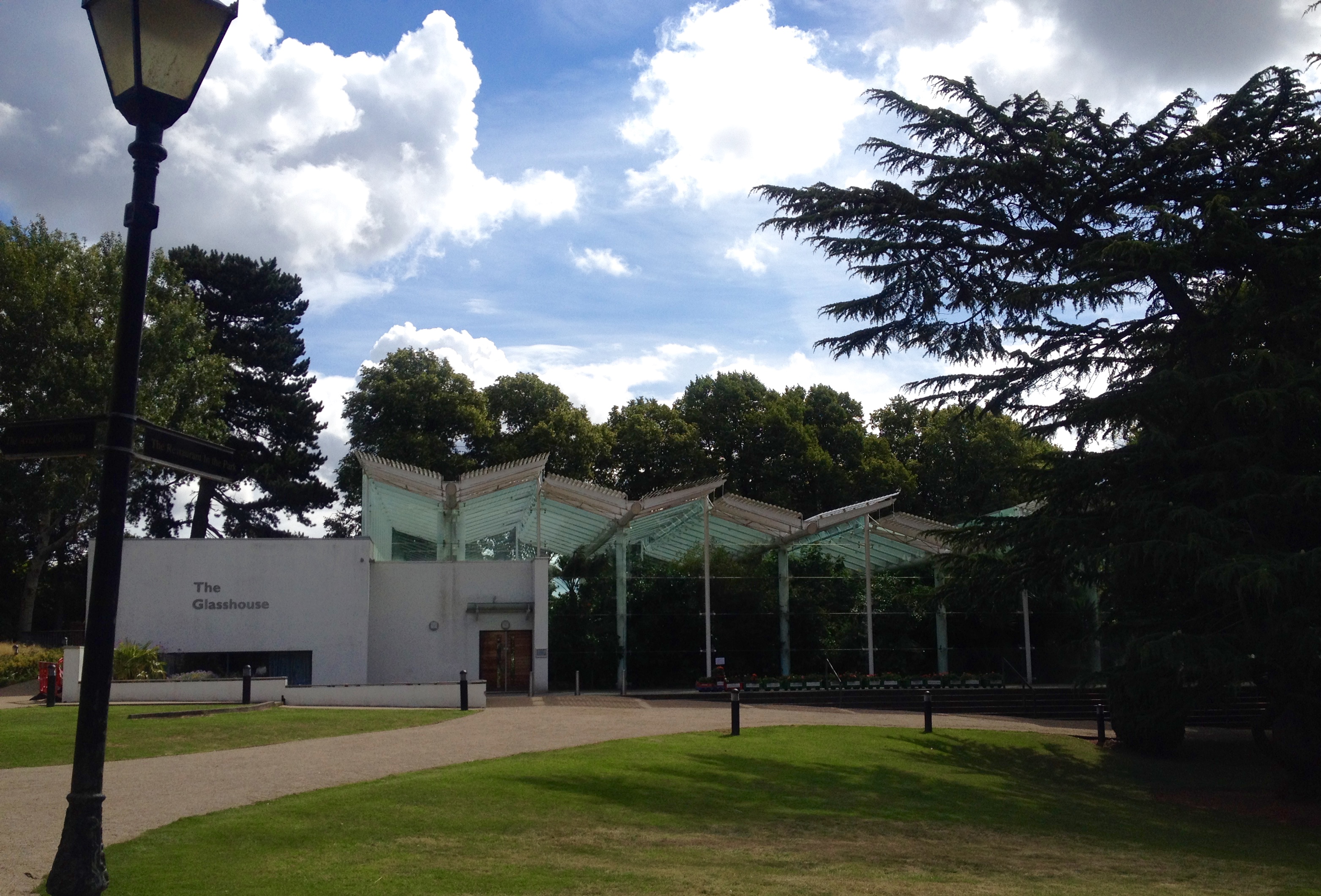 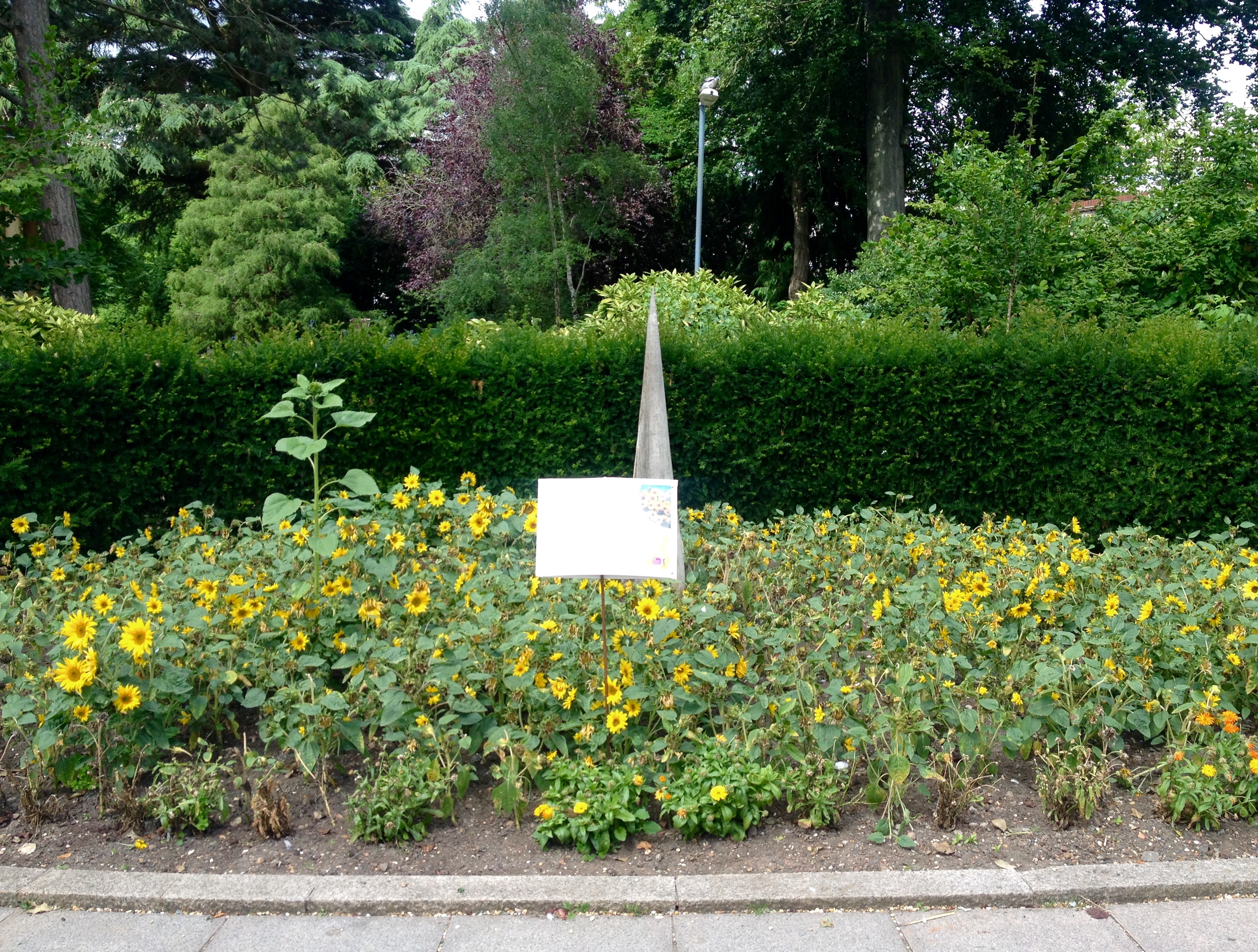 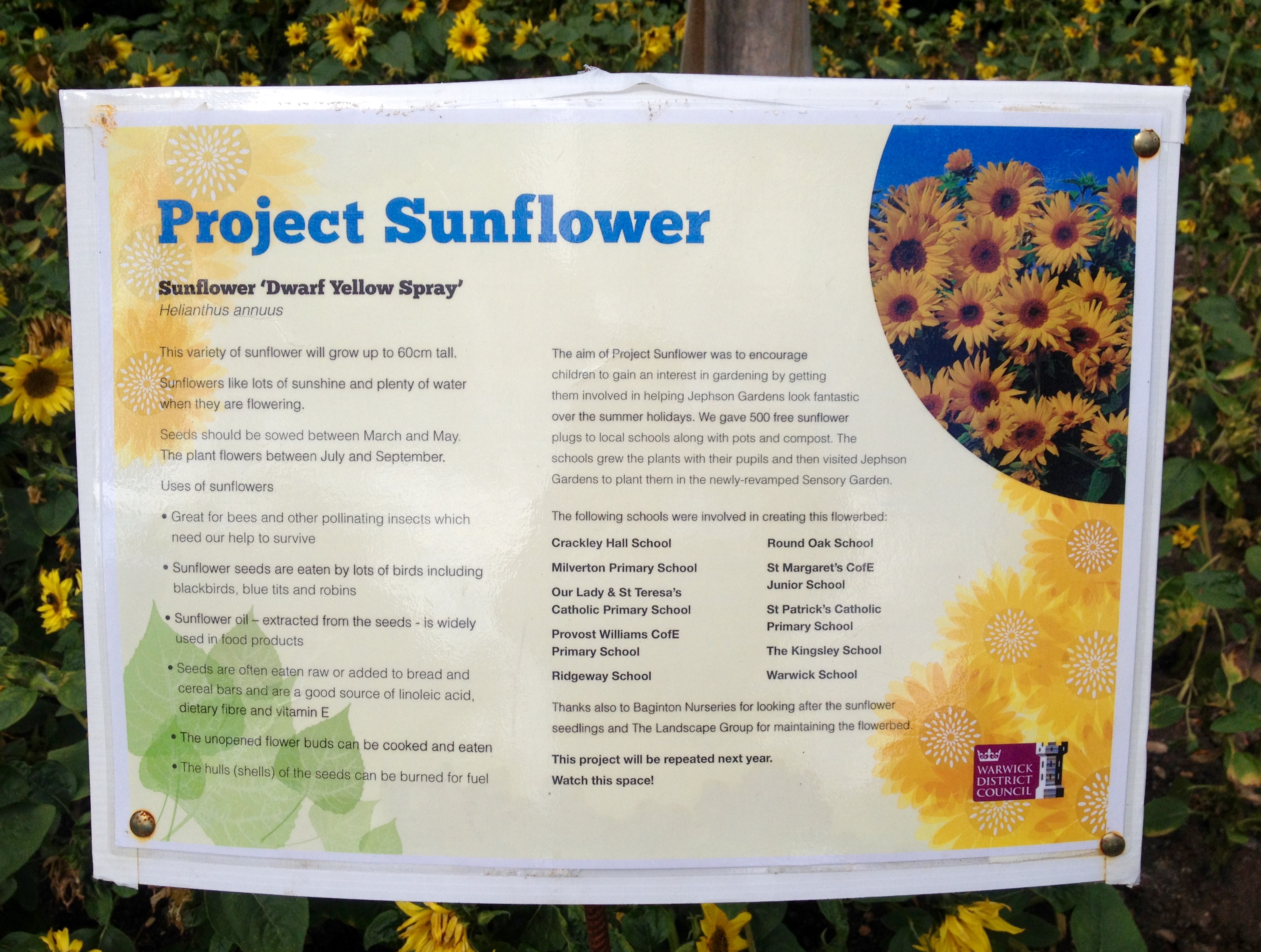 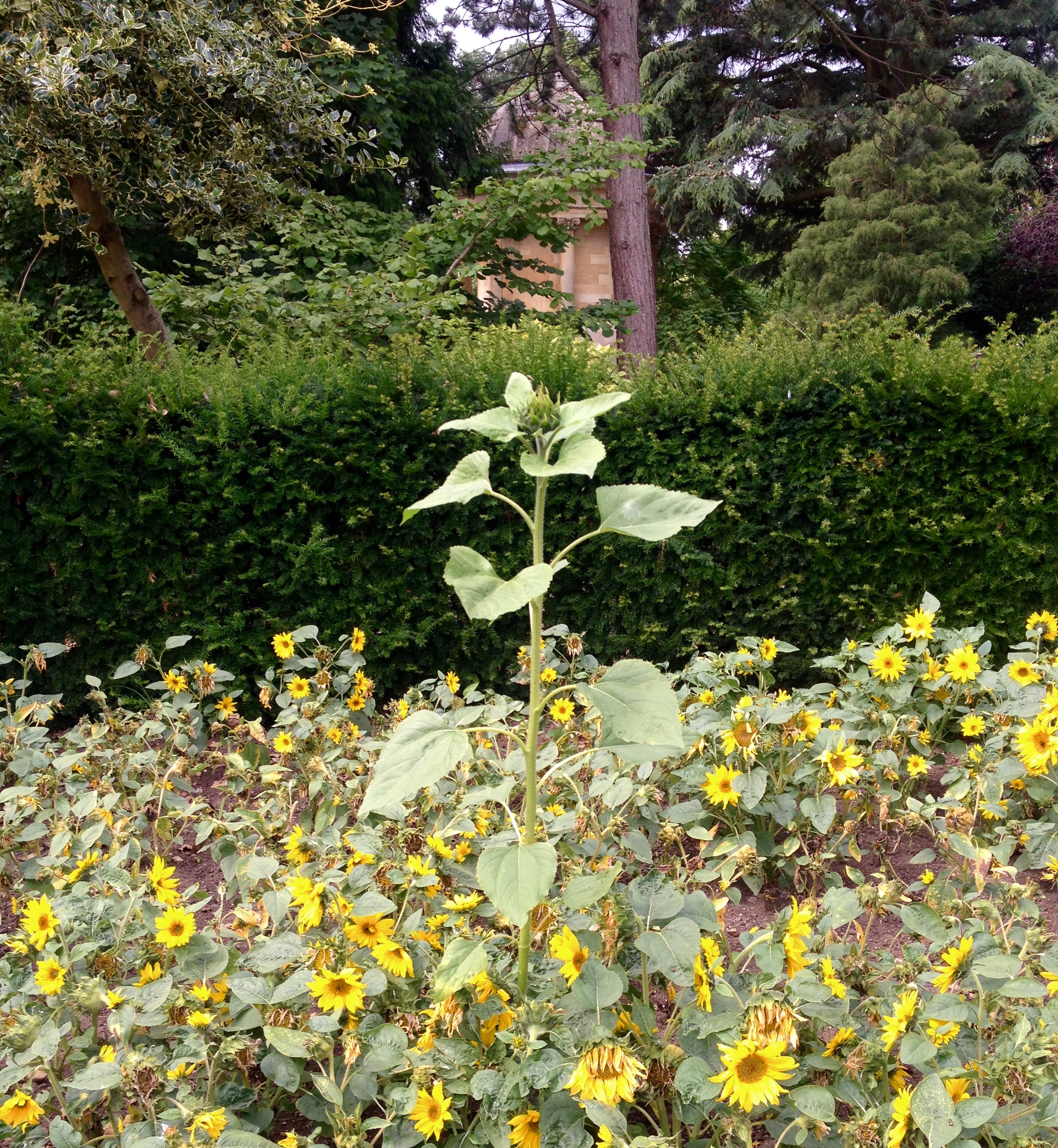 A tall sunflower rises above the rest – please don’t cut it down!

Art in the Park

As well as loving re-visiting Leamington Spa, they fortuitously had a colourful event on over the weekend to tickle our senses – ‘Art in the Park‘.

Opening the event were the ‘Sambassadors of Groove’, Leamington Spa’s Samba Drum and Dance School and Performance Band. We’d thought they were a form of Morris Dancers, and were intrigued to watch as normally at festivals we’re trading and don’t get to see performers. 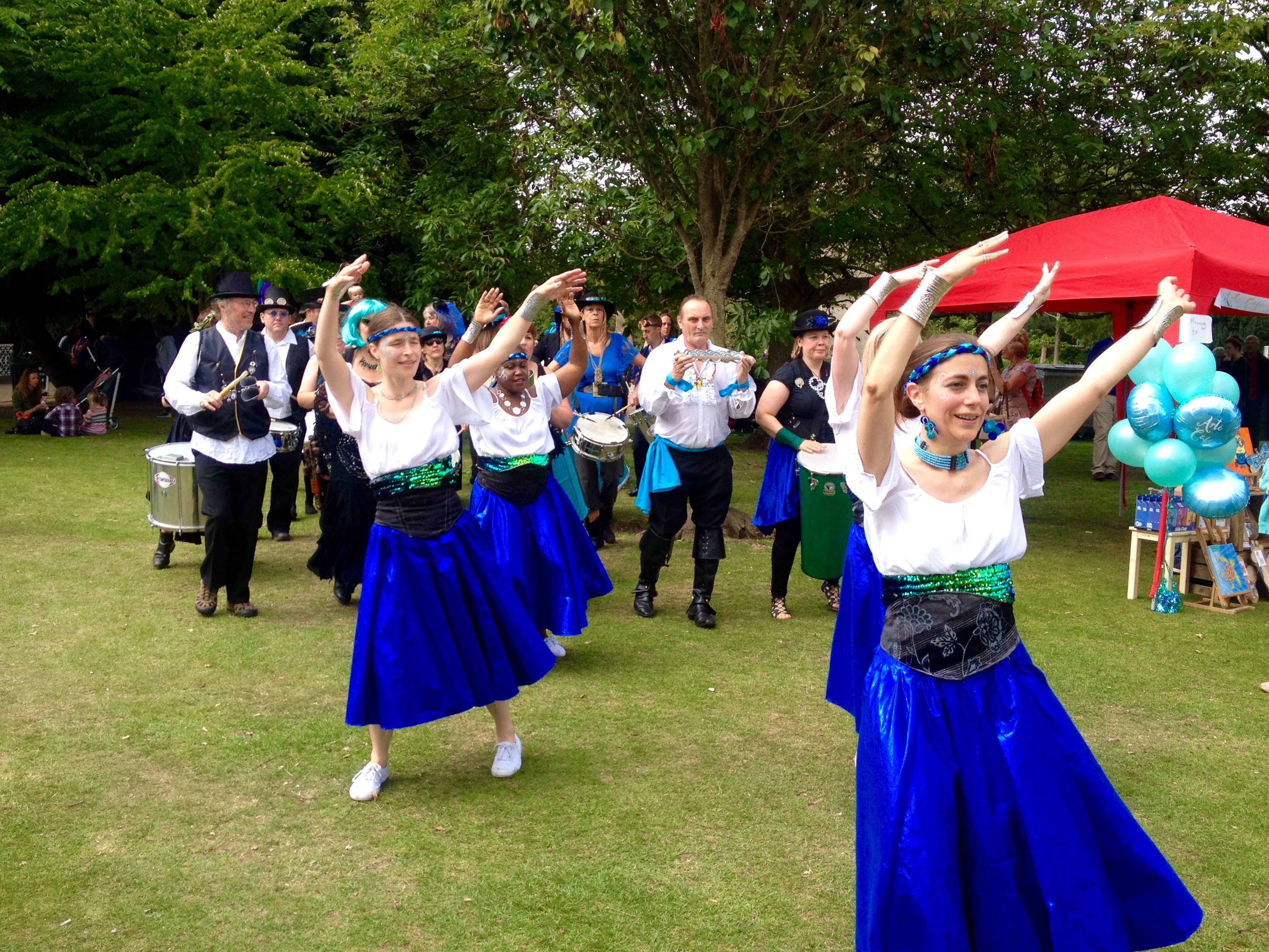 Sambassadors of Groove dancing, drumming and chiming into the art fest 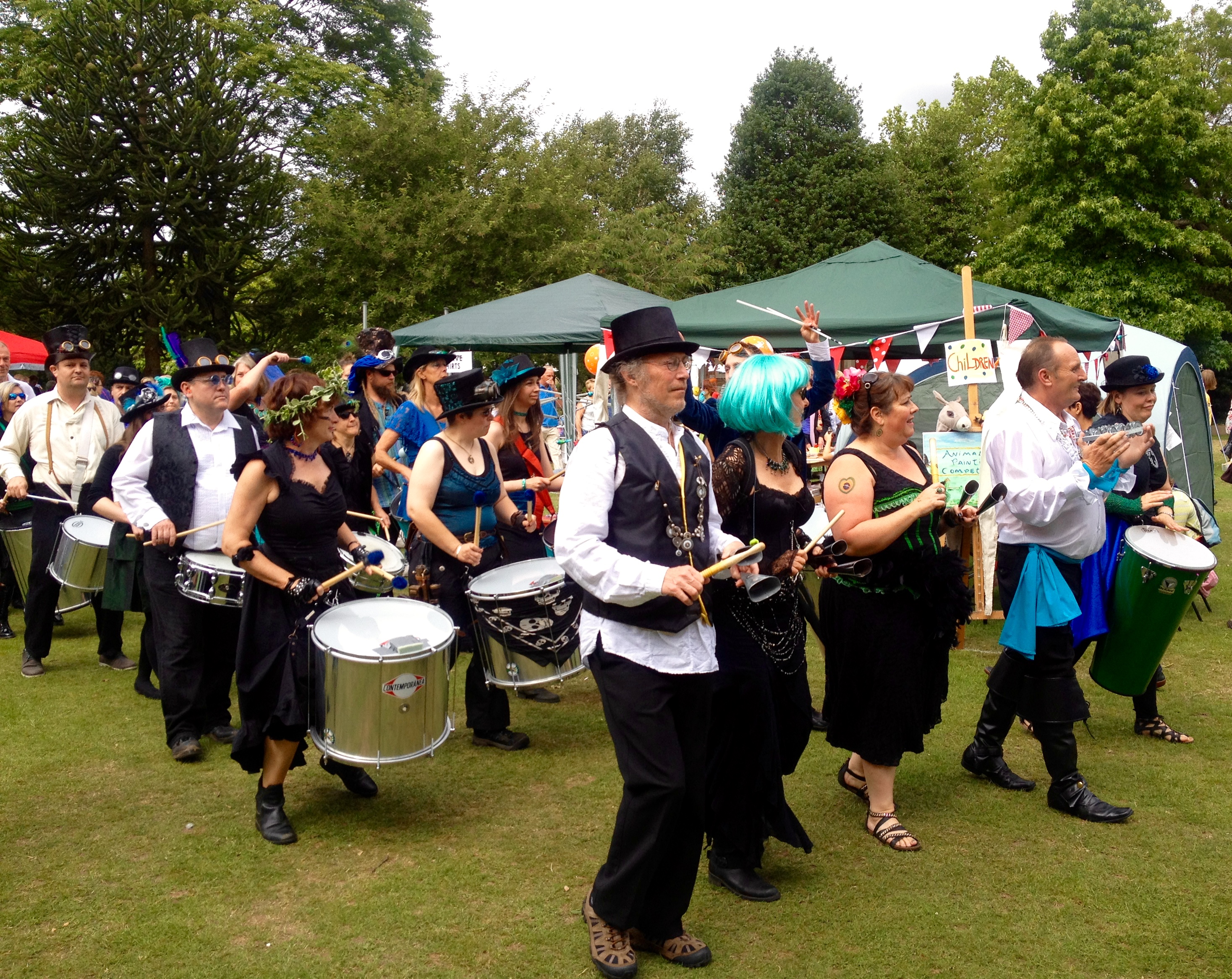 Sadly we couldn’t stay long as we had many more locks to ascend to our next point on the journey to Blisworth.

As we were walking away from the magical performance, I spotted a rather unique and unusual camera. Some time ago, Barry had a vision of taking 360 degree pictures of some of the iconic waterway views. For many reasons, it’s never manifested into reality – however the actual camera to do this it appears has!

And here it is, along with one of the people involved in patenting it (I think that’s what he said!). He did tell me his name. Apologies if you’re reading this, I have clean forgotten it. He said he’ll send us a link to the YouTube video he shot (which may feature us promenading around the camera like a couple of sill school children!). If he does I’ll post a link in a future blog. 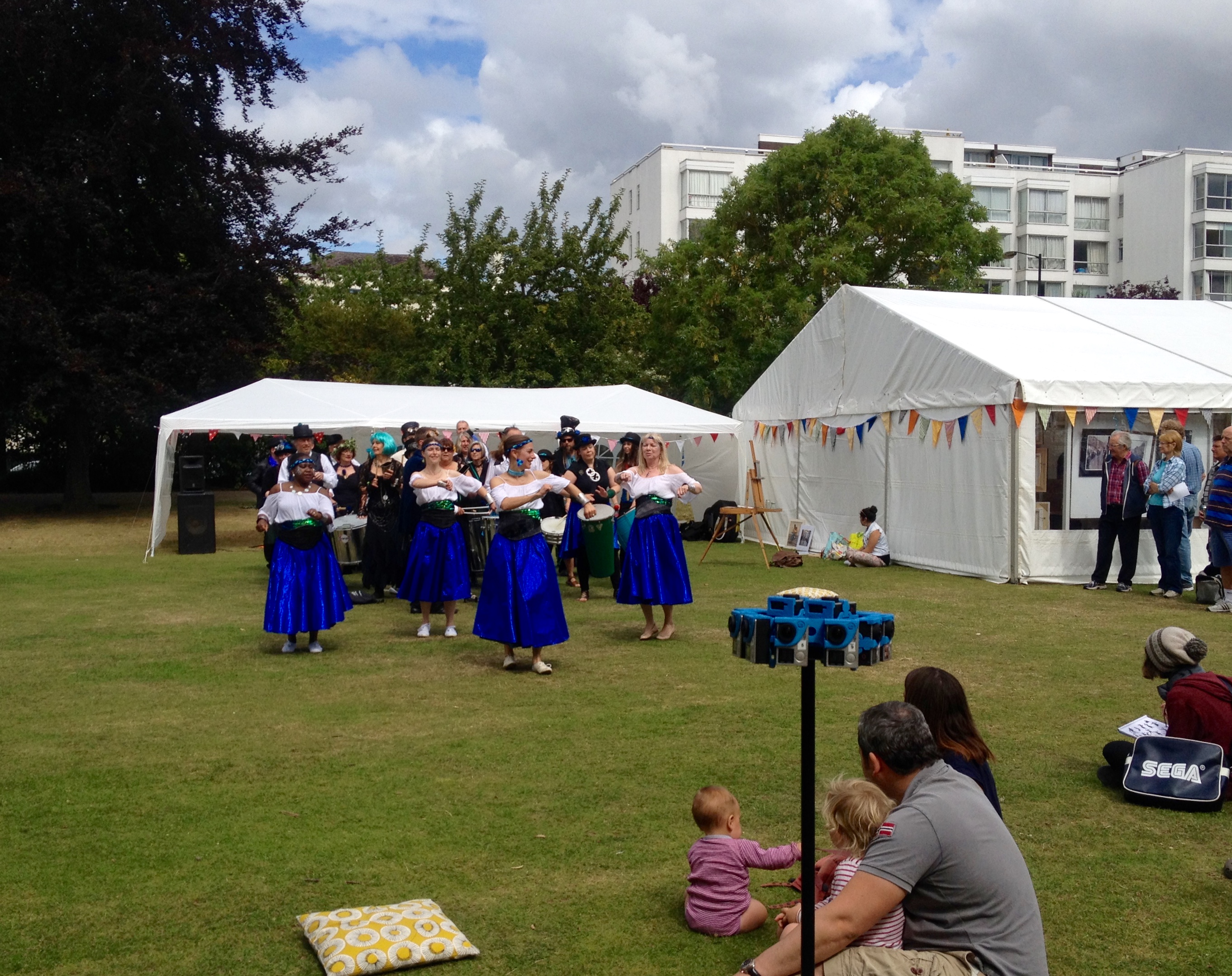 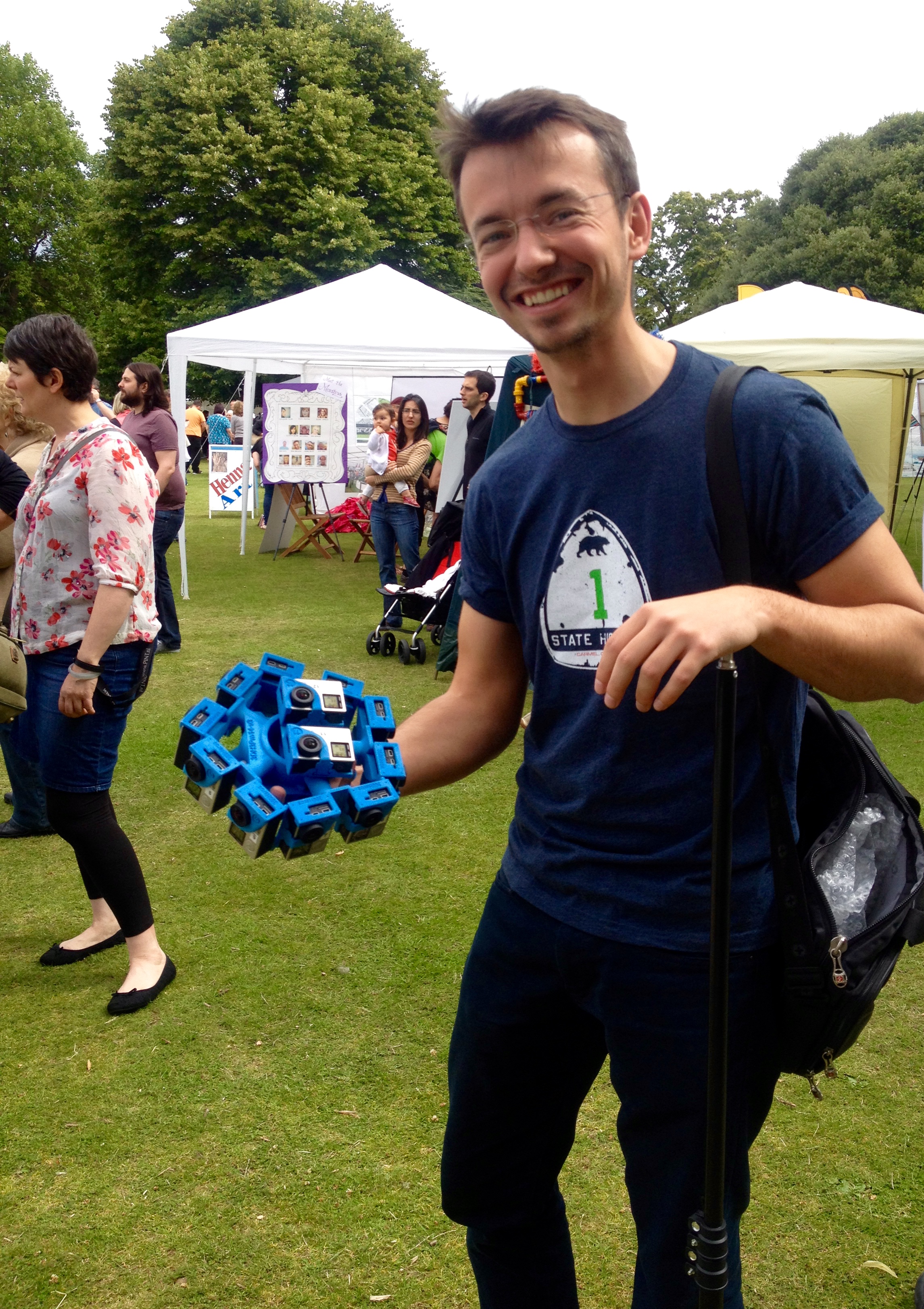 We moored yesterday evening in a very tranquil spot about a mile’s walk to Long Itchington.

We’ve stayed here before, but not made the effort to walk into the village and have a look around.

It boasts six pubs, and we managed to find five of them (we didn’t discover The Green Man). Our choices for a beverage or two were firstly the Buck and Bell:

“Just off the Fosse Way, in Long itchington, The Buck & Bell has existed since the mid 17th century.

Originally owned by local families, first the Hoppers and then the Chaters, it closed in the early 80’s, it is now in the private ownership of a small company dedicated to preserving all that is best in country inns.”

and The Two Boats:

“The Two Boats was built in 1743. This traditional Canal side pub which once had a forge and stables for canal horses is set in a stunning location by the Grand Union Canal in Long Itchington.”

Two of the reasons Barry adores England, and the canal network and history. Oh, I almost forgot – and the pubs! So being able to experience all three over the course of a couple of days has been rather lovely.

Here’s a bit more of the history … 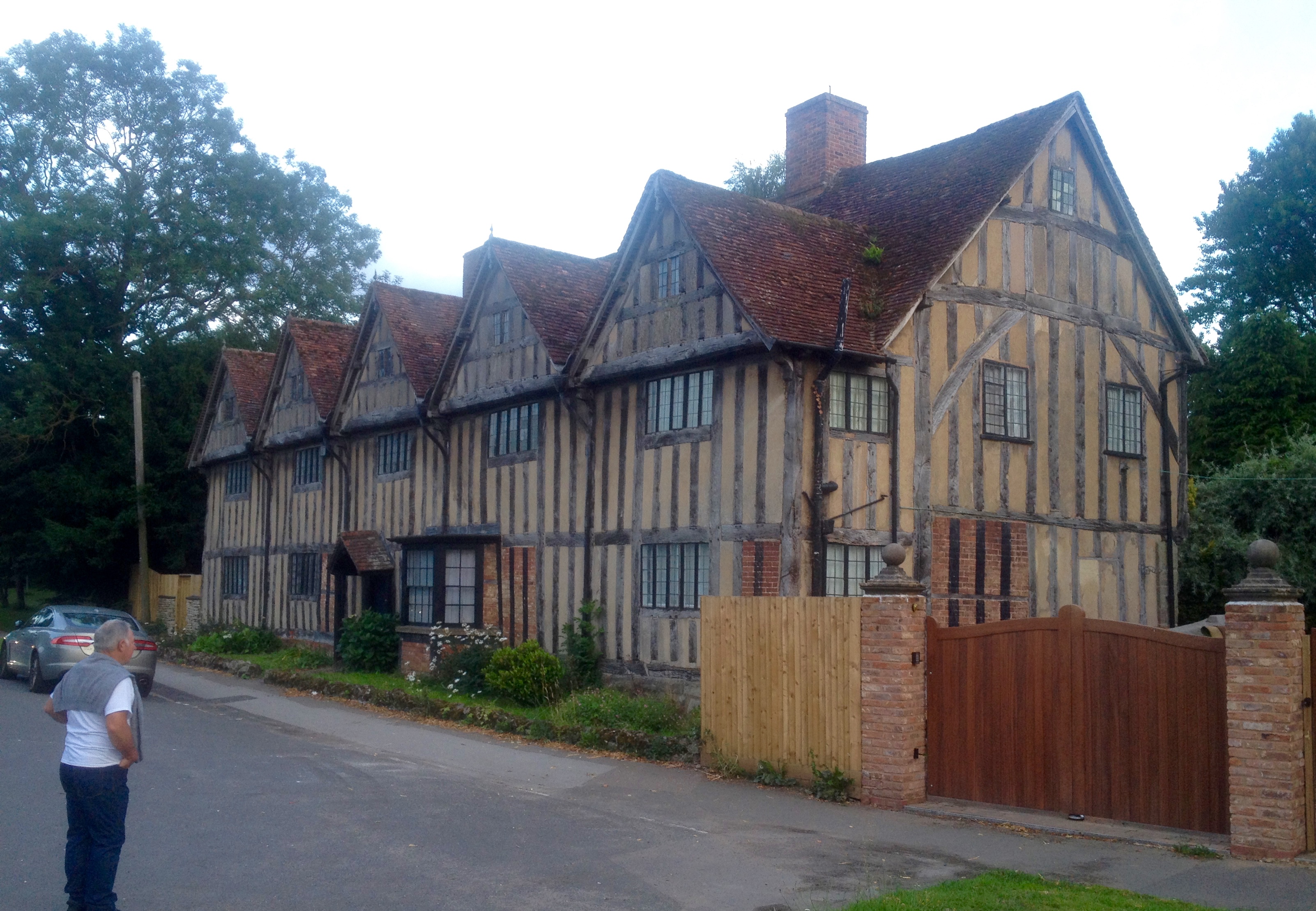 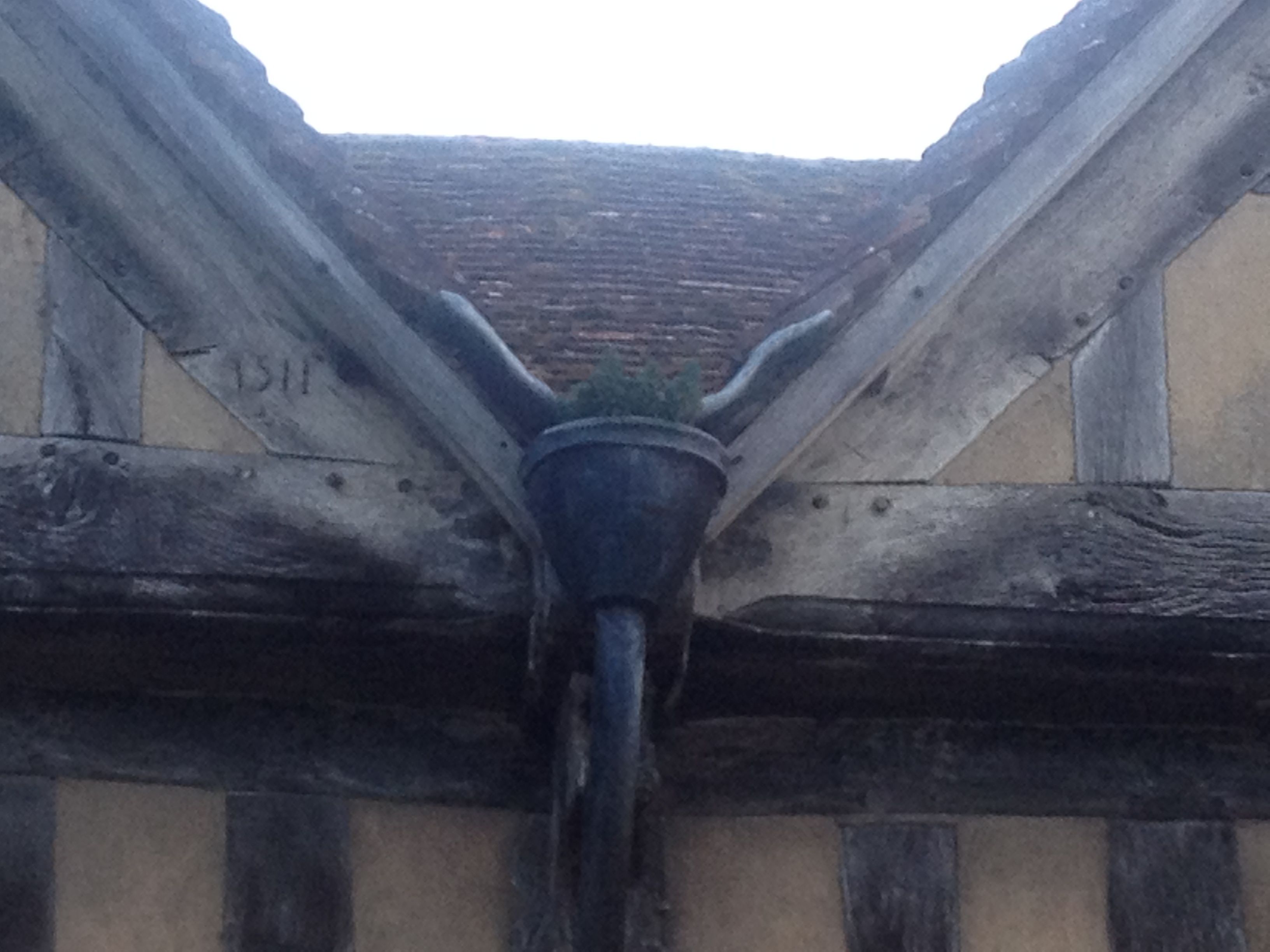 Built in 1511! The oldest house in Gisborne was built at the end of the 19th century – that puts into perspective why Barry is fascinated by England’s history

The evening was brought to a close sitting in the catch of Areandare, basking in the light of the (almost) full moon as it’s reflection glittered on the canal. There was almost total silence, broken only by a lost cygnet crying for its mum.

It’s marvellous to have a bit of ‘settled’ time on the boat with Barry, and remember why we chose to make England our home for the foreseeable future …