Before I begin this potentially controversial post, I want to apologise to a couple of lovely people.

Simon and Jane – thank you SO much for arranging to come and help Barry a few months ago and for picking me up from Penkridge station and depositing me back aboard NB Areandare. We hope to see you both again soon.

Better posting this adorable photo now, of you both sampling a spot of homebrew, than never … 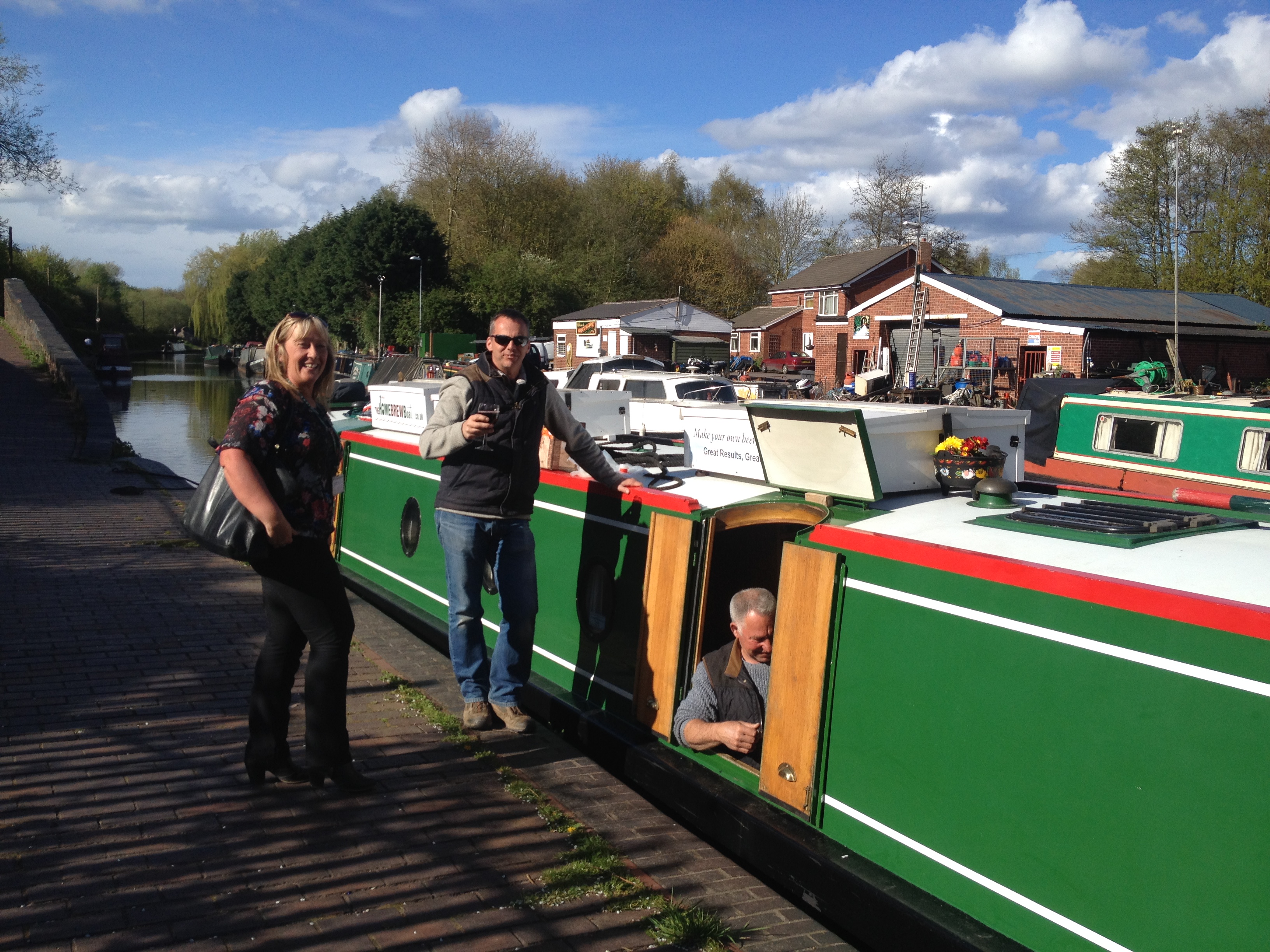 Cheers! Jane and Simon taste a sample of homebrew wine before returning to a land-based home.

It’s a term that many of our fellow narrow boaters have been called in a disparaging way by people who choose to live on land.

It’s used in a derogatory fashion as a judgement.

Often it’s whispered as if they’re unaware that there’s anyone physically living there. Or that they’re intelligent enough to comprehend the nature of their disgust.

It puts peoples backs up, and understandably, they can react defensively.

So I want to use this blog to give a little of my perspective and some information around what it means to proudly state, “I am a water gypsy by a conscious choice.”

A bit of history – ambivalence, envy or ignorance of the life of a ‘water gypsy’?

I’ve long held a fascination with the life of a gypsy.

I guess that’s more understandable to me now, as a Life Coach, knowing ‘freedom’ is one of my top 8 core values. It won’t surprise you to know adventure, autonomy and balance feature amongst those priorities for me personally, too.

In the 21st century, the ability to travel the world is something many young and not so young people are embracing fervently.

Despite this, being of ‘no fixed abode’ seems to evoke strong reactions and judgements from people apparently living their lives ‘according to the rules’. Maybe they can feel ‘stuck’ in the vicious cycle of buying more stuff, having heaps of bills, and needing to work full time even to hope to cover their ever-increasing overheads. Consequently, having time available to reflect and ponder on what’s really important is sparse.

I’ve never been much of a rule follower. I’ve been ‘stuck’ in full-time employment many times, with no opportunity to consider what I really want to do. Now I’m grateful to be out of there – for as long as it serves me.

Searching for information on ‘Water Gypsies’ through Google brought up a range of quotes to share:

“The word ‘gypsy’ is an abbreviation of ‘Egyptian’ which was applied to the Romany people in the Middle Ages since it was thought that they originated in Egypt.”

“In 1530 the Egyptians Act was passed to both expel and halt the migration of “the outlandish people calling themselves Egyptians” and was the first piece of legislation to criminalise travelling communities.”

“Water gypsies would make a living by transporting goods especially coal along the canal networks which were developed in the 18th century.”

From Britain’s Gypsy Travellers: A people on the outside:

“Their treatment reflected majority society’s deep ambivalence about the presence of Gypsies and a nomadic way of life. On the one hand it symbolised freedom from the responsibilities and duties associated with settled lifestyles – typified in folk songs such as ‘The Raggle-taggle Gypsy’; on the other it provoked an almost visceral hatred, a suspicion that Gypsies could evade the law and the codes of behaviour that bound settled society to a place and a parish.”

“In 1816, John Hoyland, a Quaker, writes the first serious book calling for better treatment for Gypsies in England. Several charitable projects follow; but many Gypsies are transported as criminals to Australia.”

Now that last part is interesting to us considering the friendly rivalry between Australia and New Zealand! Maybe they’re not so bad after all …

In Bangladesh, another name for water gypsies is ‘Bede people‘:

“The Bede traditionally live, travel, and earn their living on the river, which has given them the moniker of “Water Gypsy” or “River Gypsy””

It’s not an excuse to dodge the law …

We work as self-employed entrepreneurs, are registered with the Inland Revenue Department, and may even earn enough to pay tax next year; all going well!

We’re registered to vote and have a GP and Dentist by virtue of having a land address ℅ at my mum’s home. Not all boaters are so fortunate and have to find inventive ways of accessing such health care.

There’s a wonderful quote that resonates strongly with me, from a book called The Zahir, by Paulo Coelho:

“According to the tradition of the steppes – which is known as the Tengri – in order to live fully, it is necessary to be in constant movement; When they passed through cities, the nomads would think: the poor people who live here, for them everything is always the same. The people in the cities probably looked at the nomads and thought: Poor things, they have nowhere to live. The nomads had no past, only the present, and that is why they were always happy, until the communist governors made them stop travelling and forced them to live on collective farms. From then on, little by little, they came to believe that the story society told them was true. Consequently they have lost all their strength.”

Maybe one day we’ll all recognise that people are different. We all have our own unique maps and consequently, views of the world. That may involve staying in one location all our lives. It may include moving occasionally.

Or like Barry and I right now, it may mean moving most days. To a different place. With new people and sounds, and sights, and smells. Experiences we wouldn’t have in a house, being employed, following a nine to five routine, and having to tolerate frequently driving on frenetically busy roads.

This is why we’re more than happy to be called ‘Water Gypsies’ – to us, it’s a compliment, not an insult. We’ve worked very hard to be able to enjoy living this way, for as long as we’re able to.

Maybe next time any people reading this sit in judgement of anyone living a life less ordinary, they’ll be more mindful of how hurtful words can be.