Barry felt very privileged and proud to have been invited to attend and trade at last weekend’s ‘Birmingham Beer Bash‘. This was the event’s third year in a row, welcoming 25% more people than in 2014, so there’s no doubt it’s a popular one.

Admission to the event was by advance ticket only and staggered over a number of time slots from Thursday to Saturday evening. Ticket-holders were unlikely to be expecting a Home Brew Boat to be in attendance! 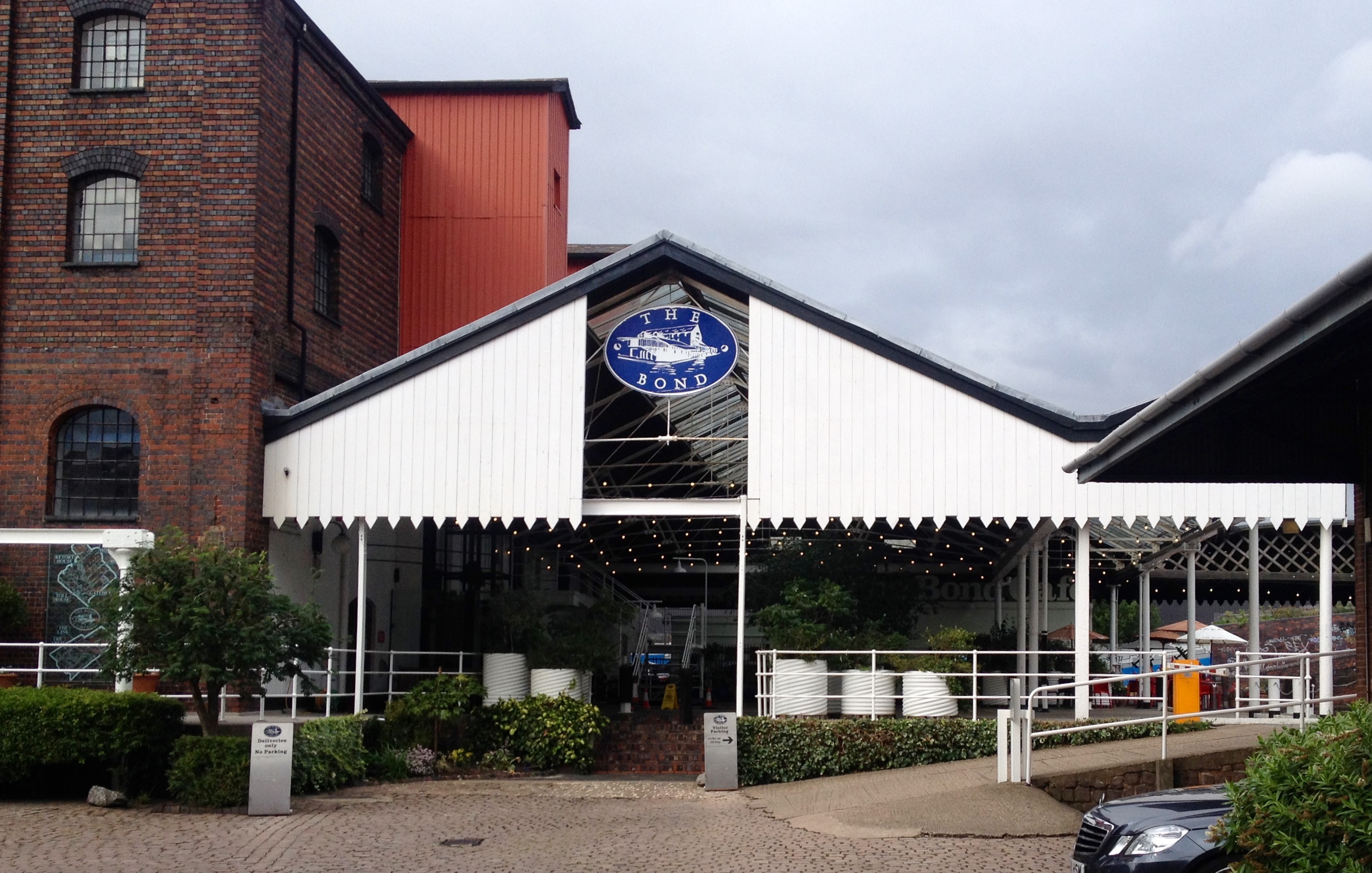 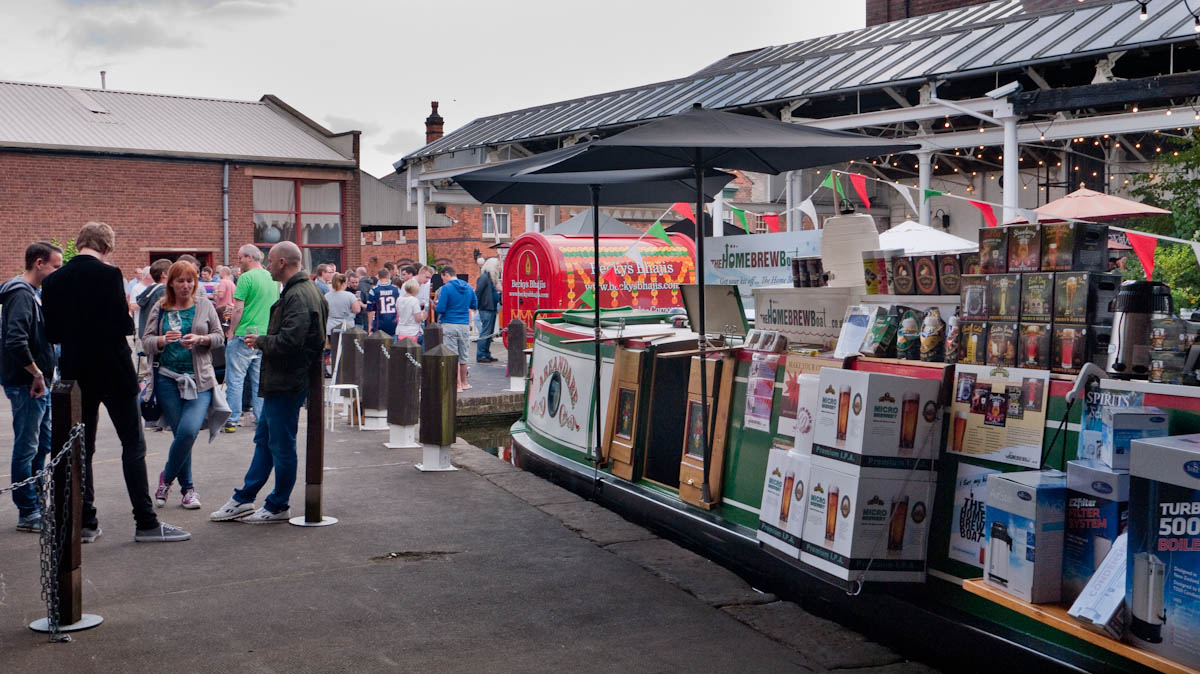 People milling around, chatting, drinking, wondering and wandering near The Home Brew Boat 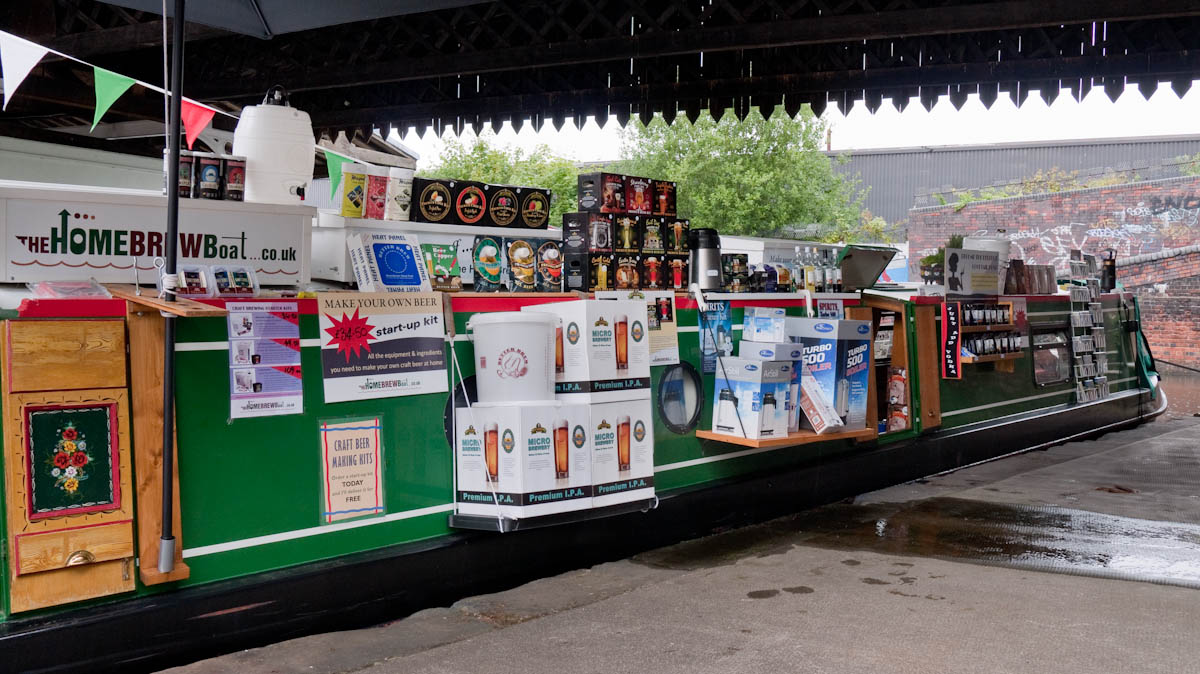 So many goodies to choose from! 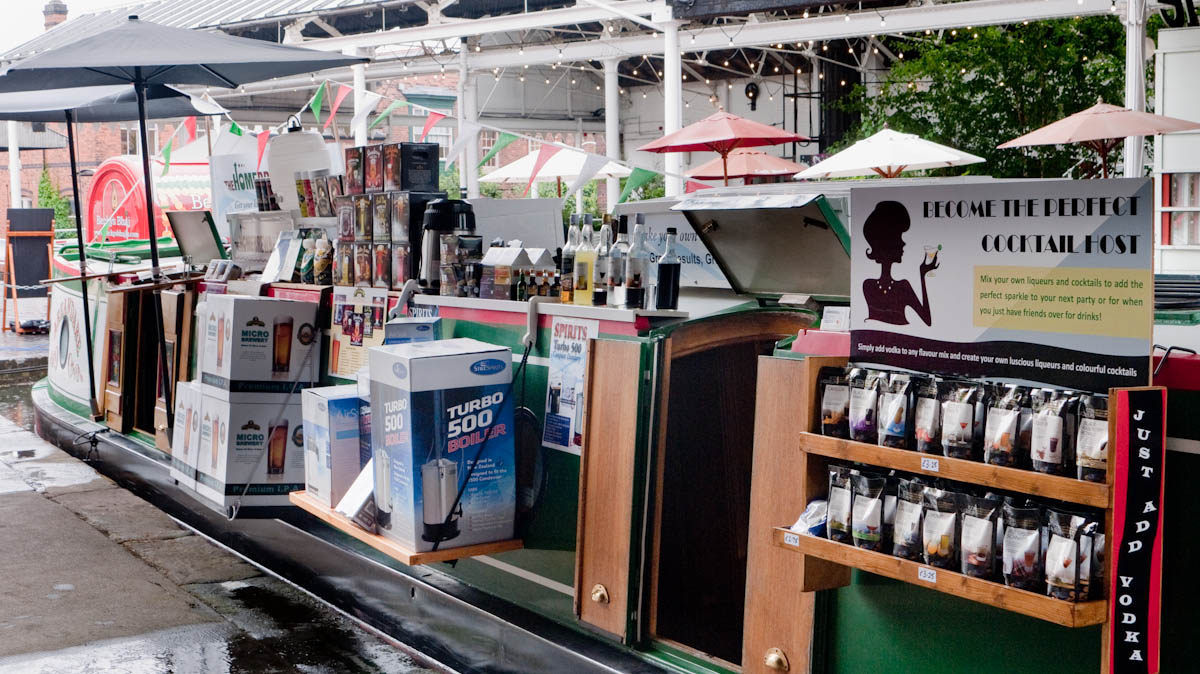 Beer and cocktails – something to suit every taste 😉

It’s likely Areandare as The Home Brew Boat was a bit of a novelty factor – which is absolutely fine as we feel she looked rather smashing, sitting as proud as punch amongst the festivities!

There was an incredible variety of beers available – British and International.

There were casks and ciders, keg bars and specially focussed Wild and Sour beers, and lagers, and a range of bottled beer too.

A few names that stand out from the brochure include Kia kaha (a Maori word meaning ‘be strong’), Snake Eyes (maybe how you look the following day?), Bohemian Hipster (bring out the ageing hippy), Hello My Name is Ingrid (the mind boggles!), Lupy as a Toucan (conjures up an entertainingly satiated person), Faceless Spreadsheet Ninja (for computer geeks?), and a Liverpool Tart (maybe just because it’s shocking to go to the bar and ask for one!).

Simon Williams, from CAMRGB (aka the Campaign for Really Good Beer), says:

“BBB isn’t just a beer festival in a beautiful post-industrial setting in one of the country’s best and most exciting cities, it’s a place, a space, where you can discover beer and discover people, discover that you’re not alone, forge new alliances and friendships, have your spirit of adventure renewed, feel young and excited again, and get a bit tipsy while you’re doing it.”

There was also an abundance of fascinating food stalls (some of whom kindly fed Barry in my absence at a discount!), many from Birmingham’s celebrated street food scene, and a musical line-up each evening.

An unexpected bonus of Barry being given permission to remain moored at the venue overnight from Thursday to Monday was most welcome. Previous visits to The Bond in 2014 for their Spring and Autumn markets have entailed arriving in the morning and leaving once the event had finished.

The slight challenge was Barry had to remain ‘imprisoned’ inside boat overnight – any movement outside would have set off their alarm system. Not that he has much of a problem being ‘stuck’ on  his beloved floating home! And it was lessened by the program involving late night sessions, so once he was sorted it was almost time to retire anyway.

As expected, there weren’t a huge amount of sales during the weekend, but there was lots of interest, it was a great marketing exercise, and there’s a promise of online after-sales.

Meanwhile I had a wonder-filled week with our grandsons and my daughter in Malpas, followed by an amazing Walsh family weekend at Northmoor House near Exmoor. 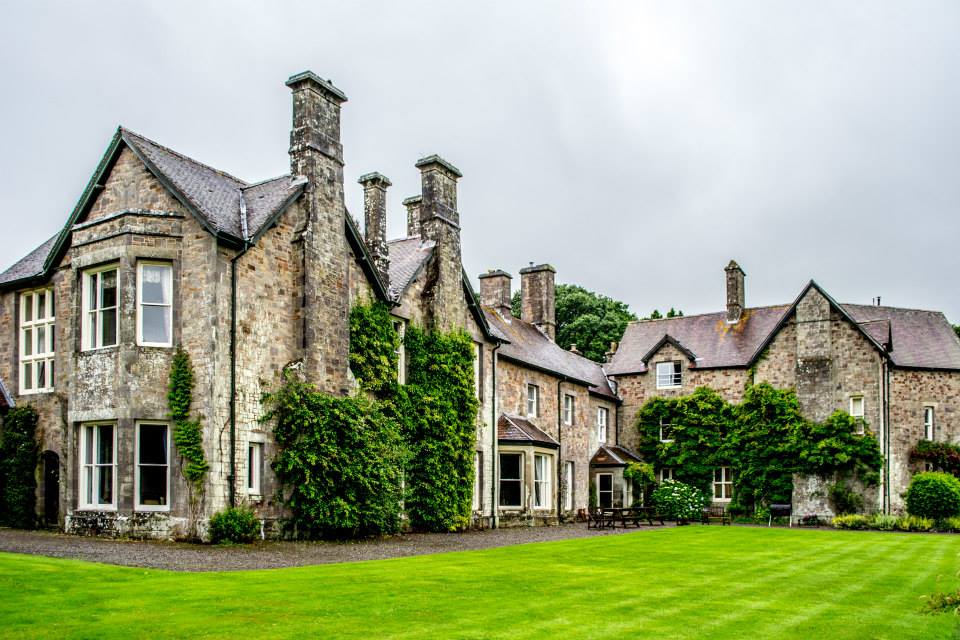 Northmoor House (photo taken by my brother-in-law Ray Burns who was stand in official photographer for the weekend!)

November 2014 marked 60 years of my parents being a couple – and 30th July 2015 would have been their 60th wedding anniversary.

The house boasts 14 bedrooms and 7 bathrooms, has two lounges, a huge dining room and kitchen, and a full size snooker table overlooked by three stag heads. Every visit includes an obligatory snooker tournament, with names being drawn from a hat to play. As our family has grown considerably since our first stay, we also book the Lodge, a short walk along the driveway and sleeps five people.

This year two of my niece’s partners were asked to organise the playing schedule, and they honoured us by having a trophy made which dad would have adored. It was one of his favourite games, and one he was extraordinarily good at even as his health was fading. So much so that he thrashed his grown up grandson in 2013, much to Jack’s surprise and dad’s delight.

Barry hopped on a train at New Street down to Tiverton Parkway on Sunday morning and joined us – for less than 24 hours! It was worth it though, to experience the magic of being enveloped by the love within the Walsh family. 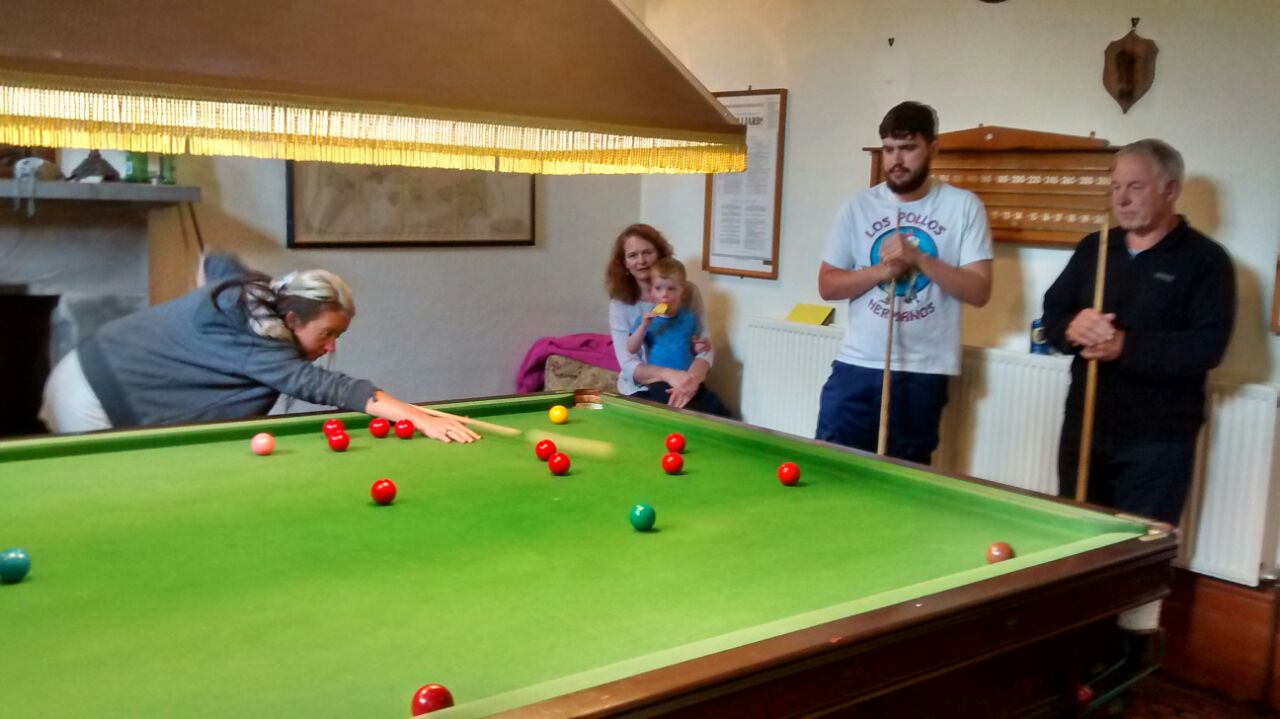 Barry even got a game in playing Snooker at Northmoor House 2015 (not that he won a game!), standing in for Jack (D) on Sunday evening as he had to leave early 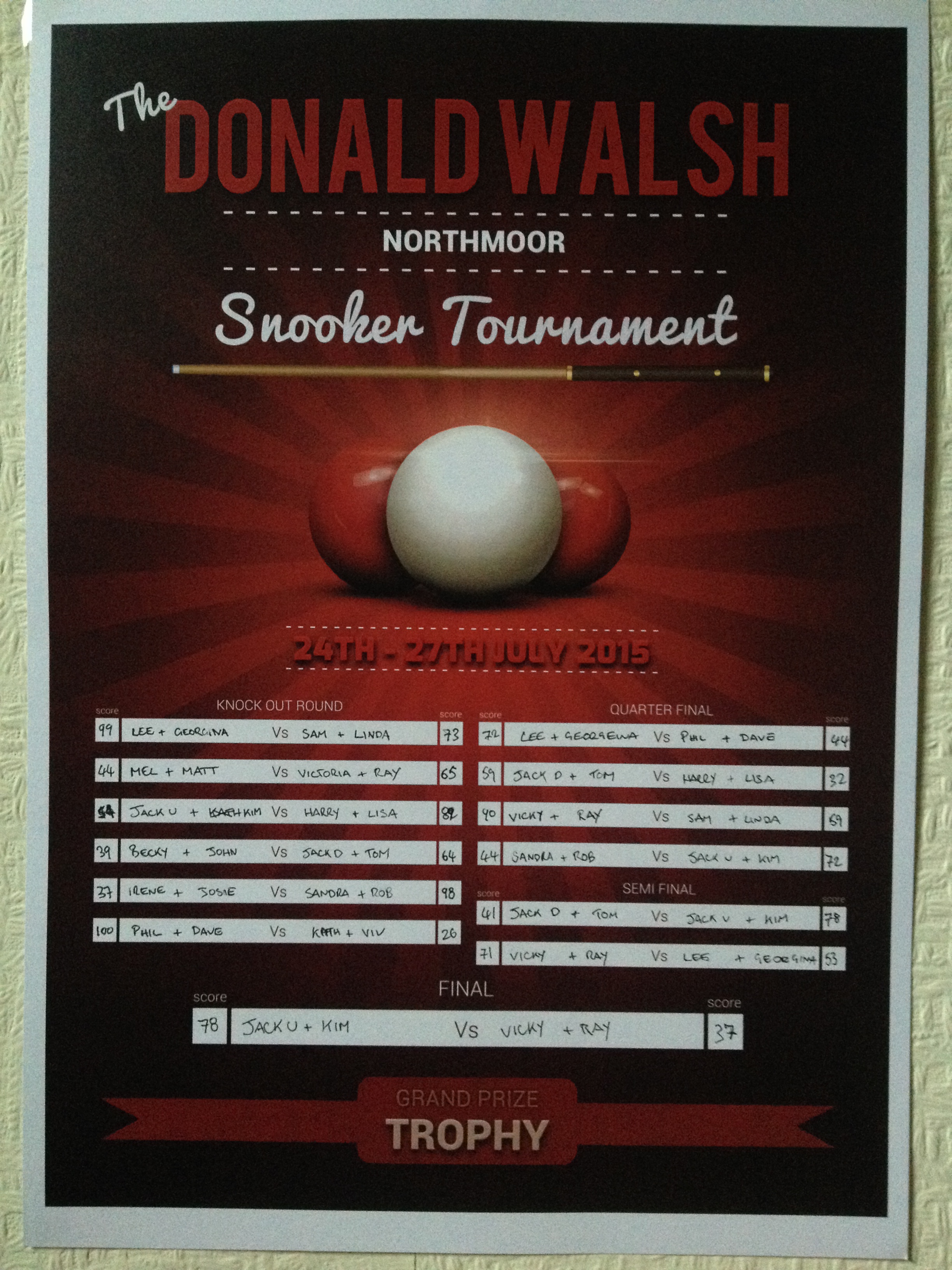 We’re now winging our way serenely to Blisworth for our next canal festival, optimistically hoping for more sunshine, though in reality dodging the usual intermittent rain of a damp and grey British summer.

We’re both trading over the weekend of 8th and 9th August – and also catching up once again with Helen and Andy who will be trading from a trestle table rather than The Jam Butty. We’ll have the pleasure of their company overnight on Friday 7th for another game or two of six-handed rummy I have no doubt …