It’s an infinitely fascinating life living on a narrowboat, cruising and trading on the canals as we do.

Unfortunately the weather’s been attempting to drown us with squally showers and intermittent hail, with a dash of sunshine thrown in to keep our spirits up. I’ve had to keep my waterproof trousers and coat on, as well as wellington boots. I even wore my thermal long sleeved top under my clothes for a couple of days as it was so cold.

Travelling down south wasn’t on our itinerary this year, so it’s been a delight to unexpectedly return to canals we’ve not seen since 2009.

Consequently the captain has been in his element snapping away, and he’s given me some images to share (there’s a few more to come from Tardebigge but I’ll save those for another post) … 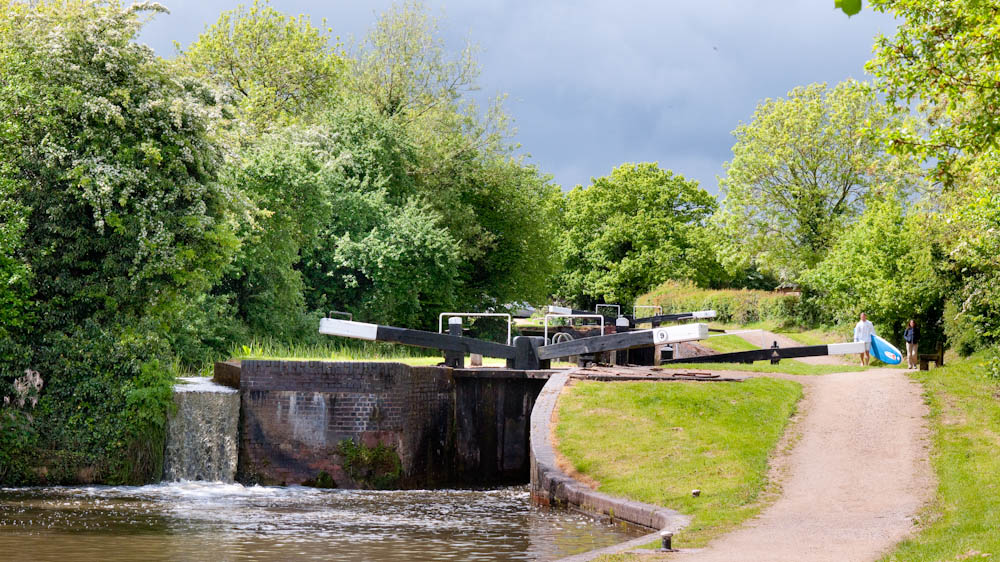 Descending the Hatton Flight – you don’t see a guy wearing shorts (on a rainy day), and carrying a surf/wave board very often in these parts! 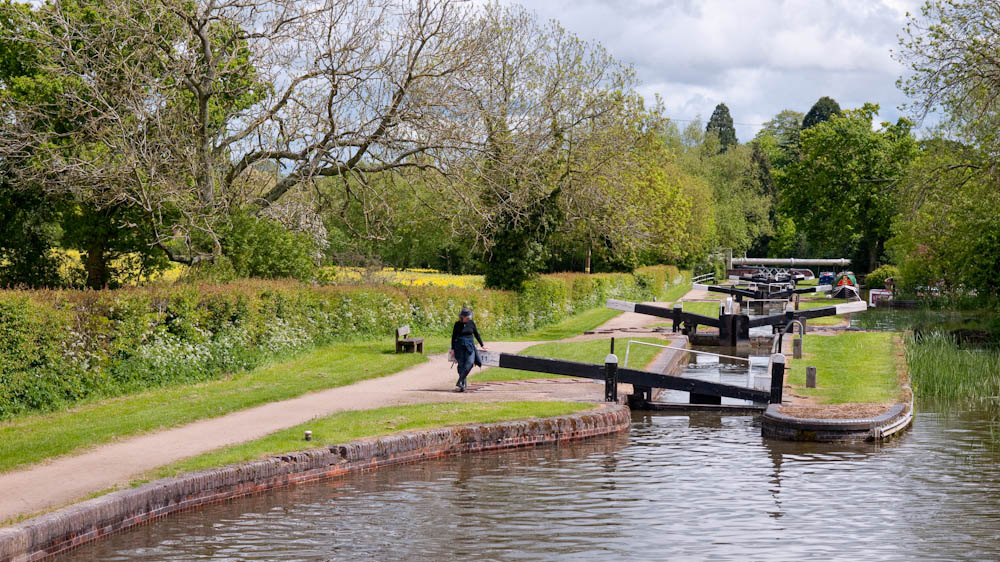 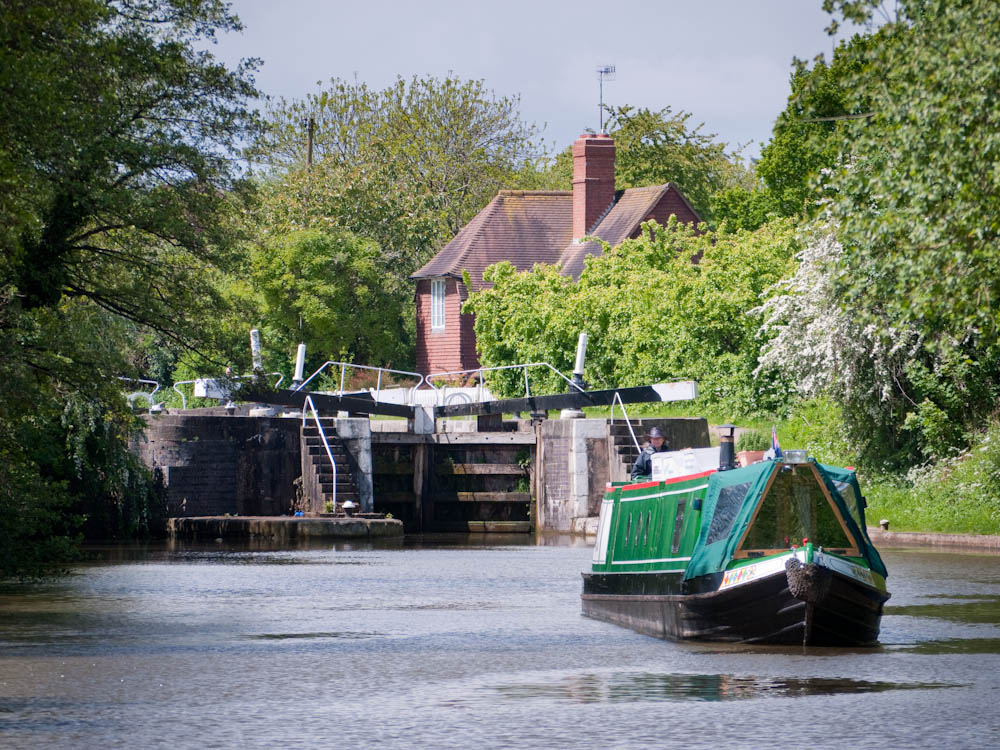 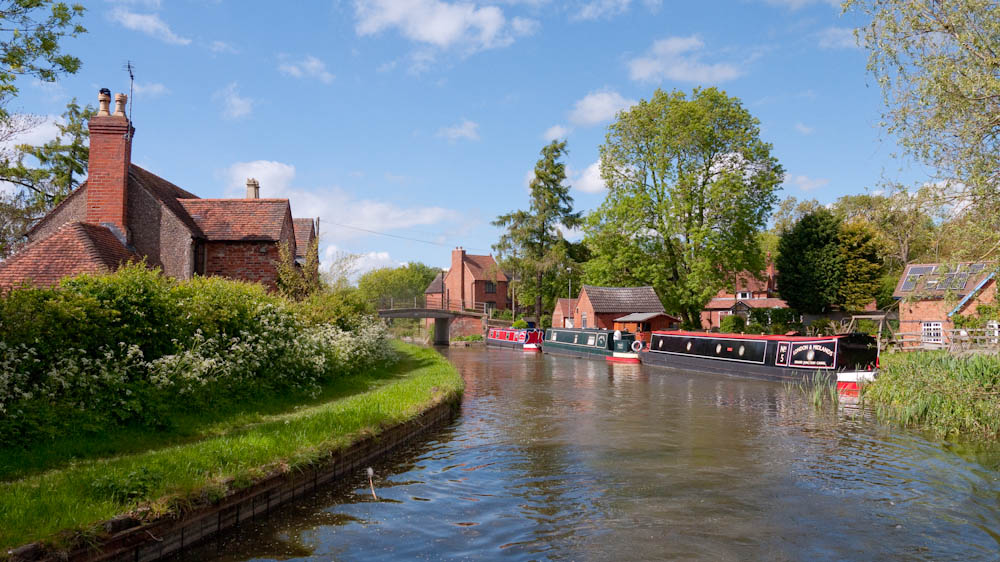 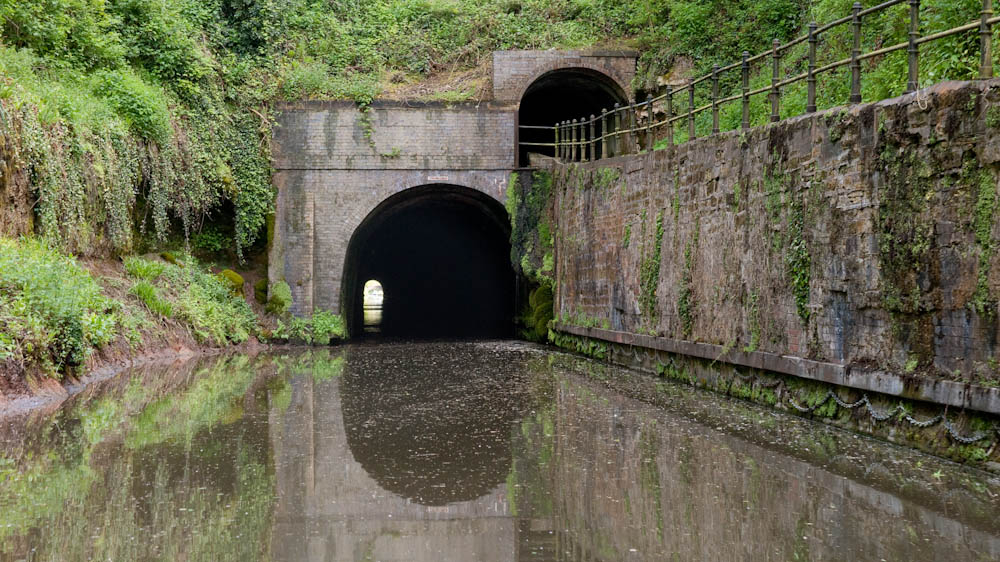 Entering Shrewley Tunnel – Barry gets a break from driving. There’s a horse tunnel to the side, which if you walk along takes you to a suburban street which you walk across to get to the path to the other side of the tunnel 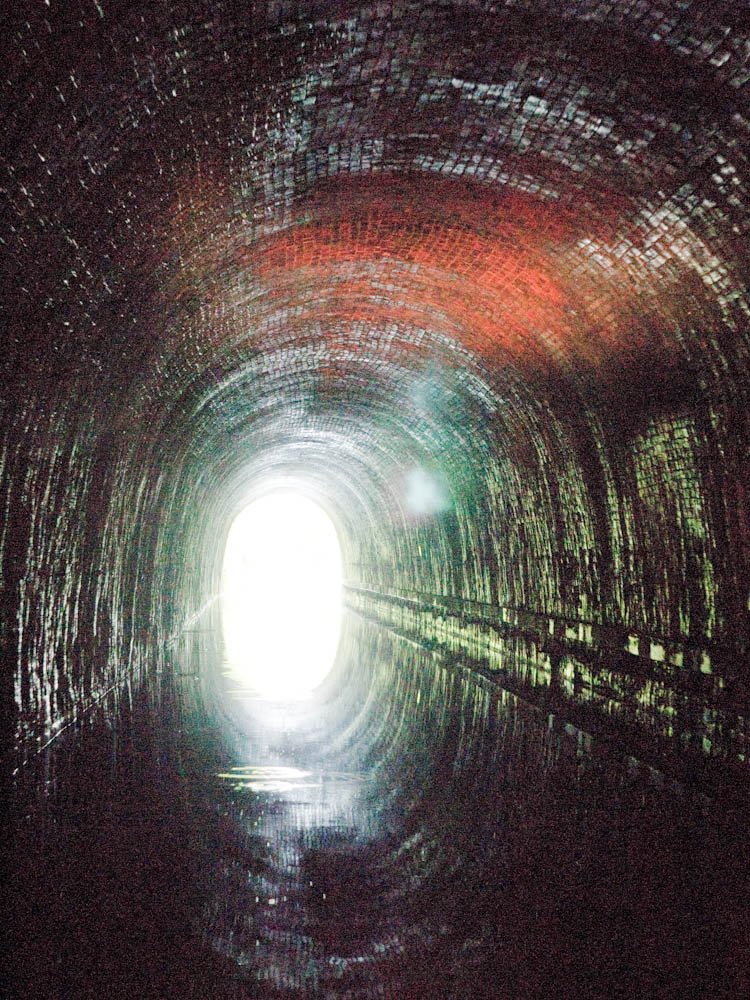 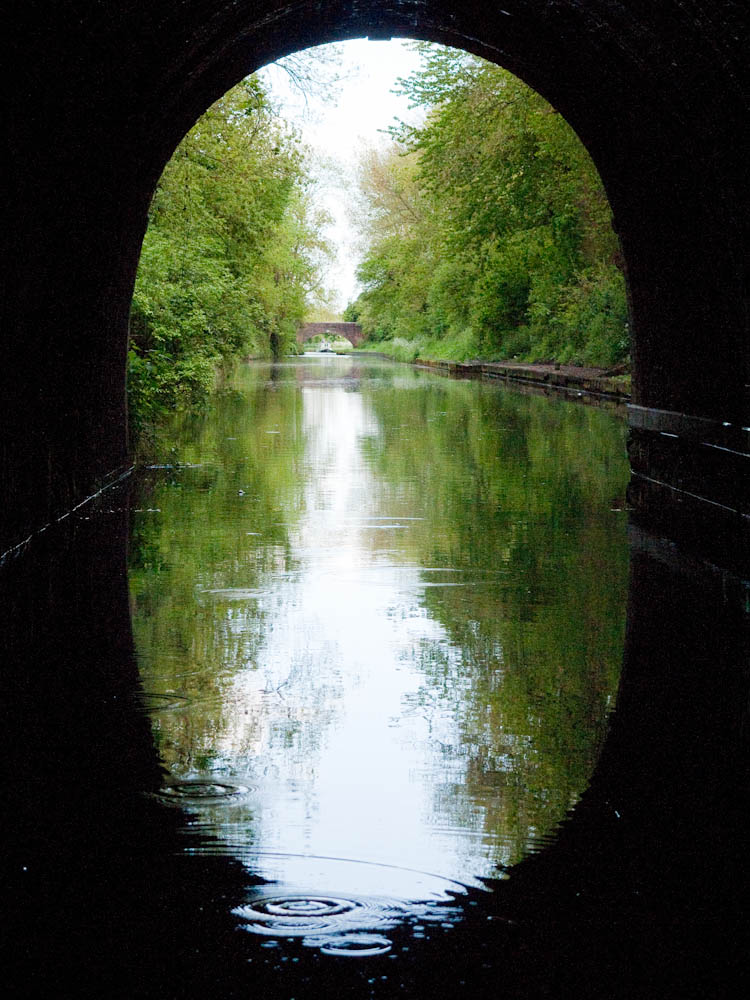 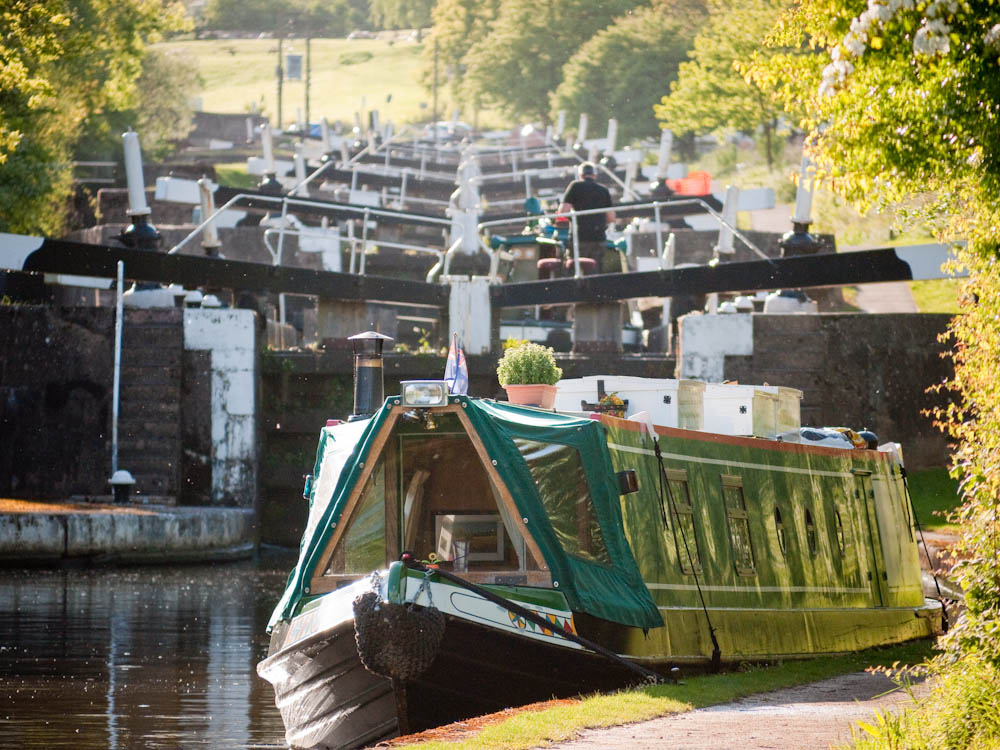 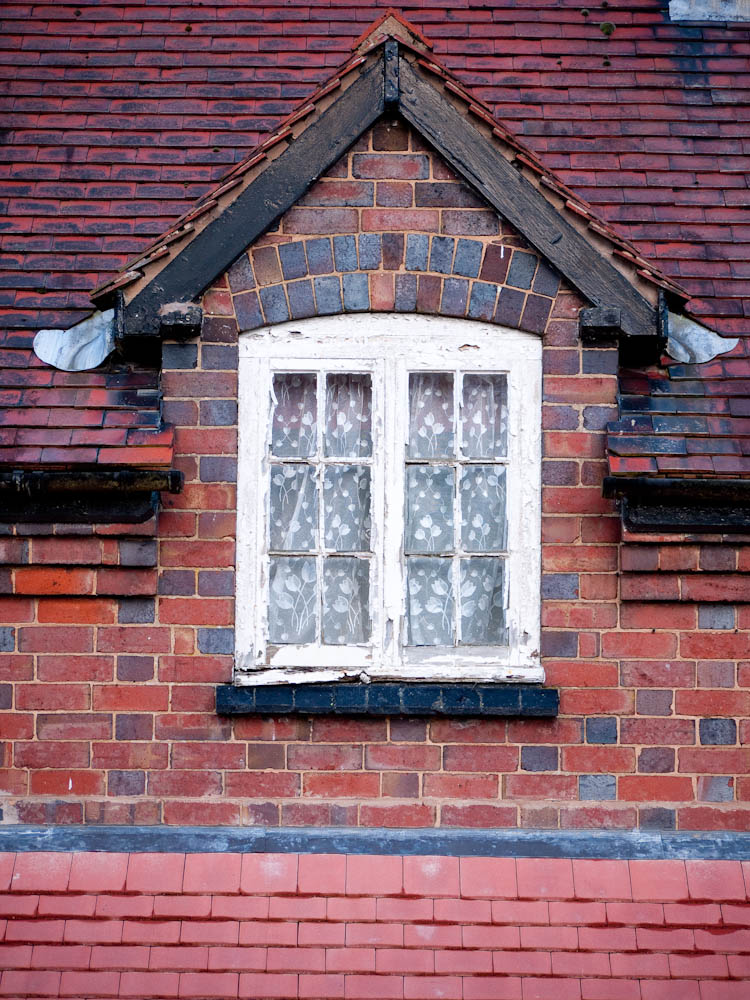 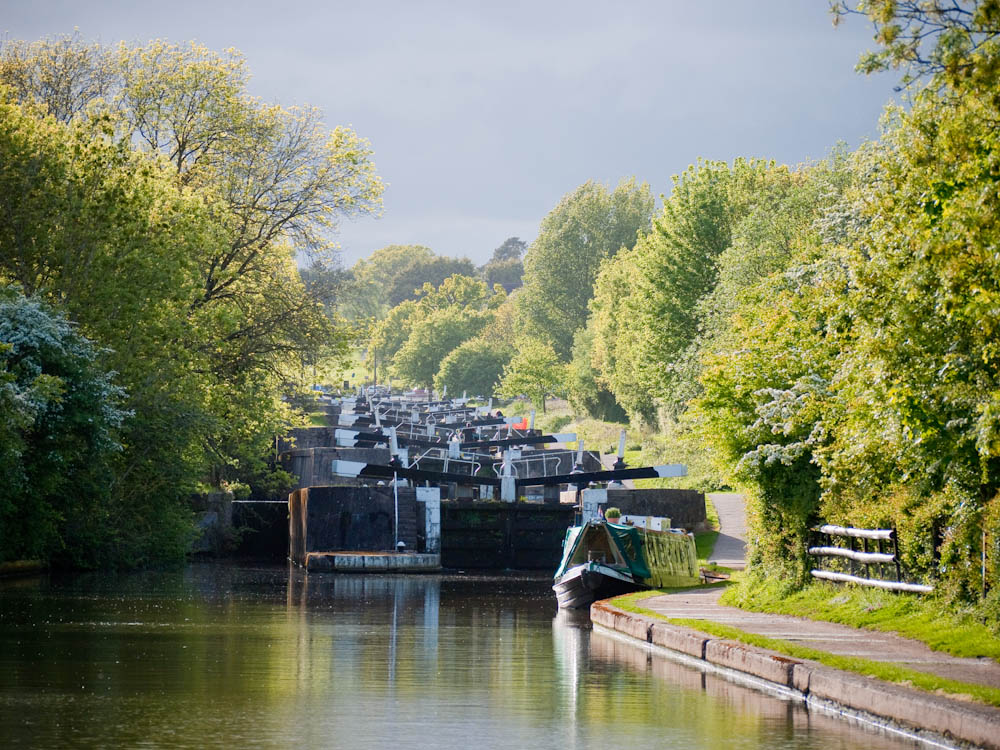 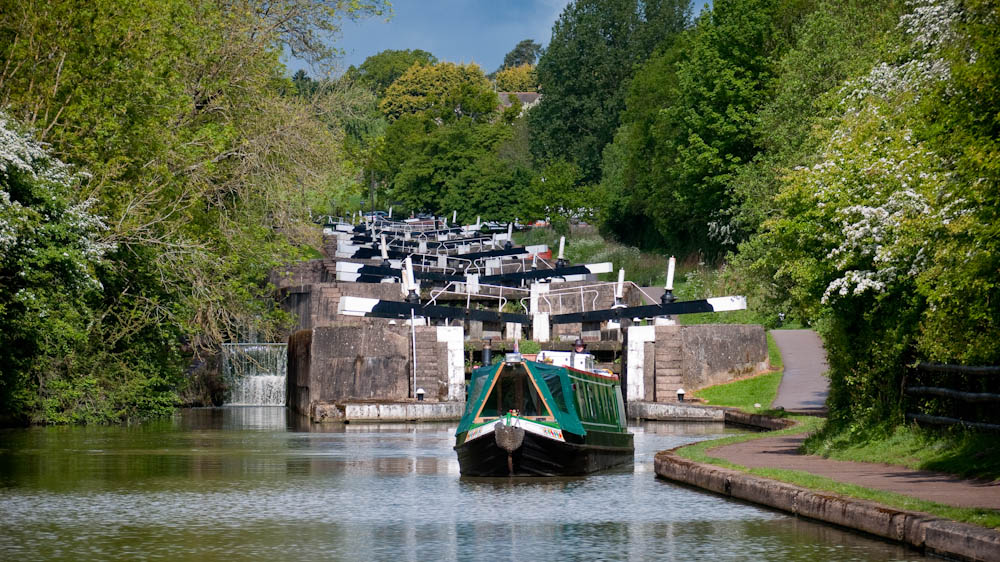 Starting out Tuesday – loads more locks to get through! 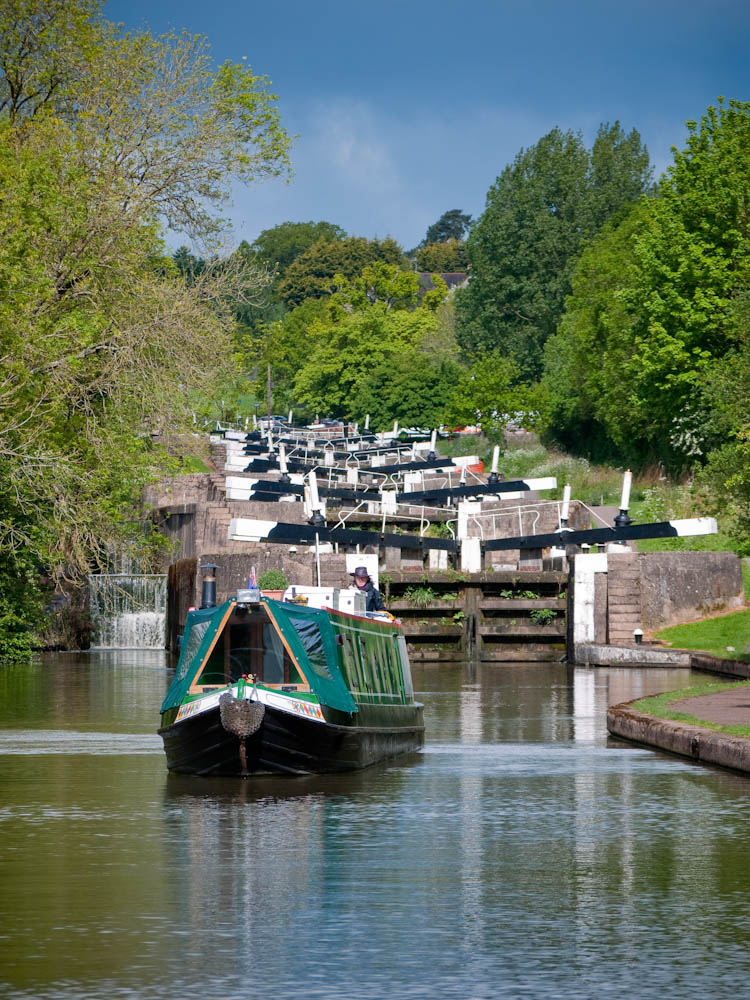 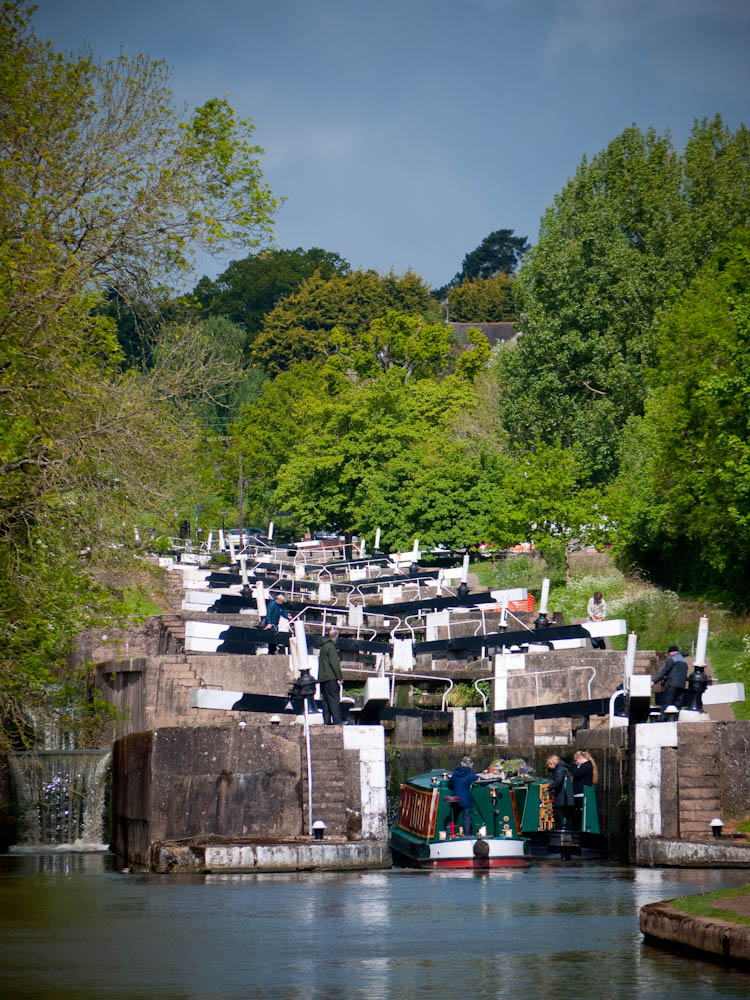 It’s always best to share a lock whenever possible – saves on the work and water! 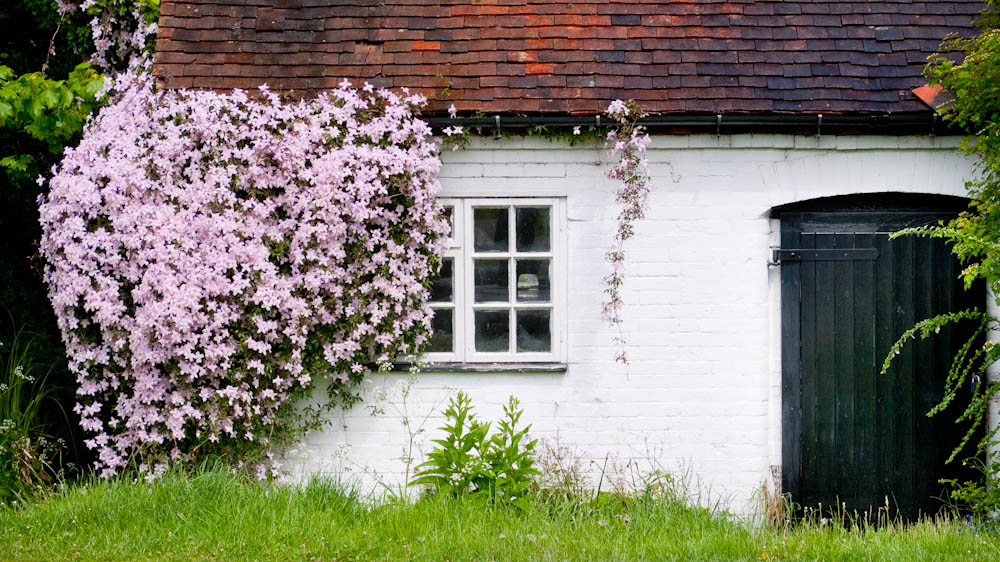 A picturesque cottage by the canal – is this a clematis? 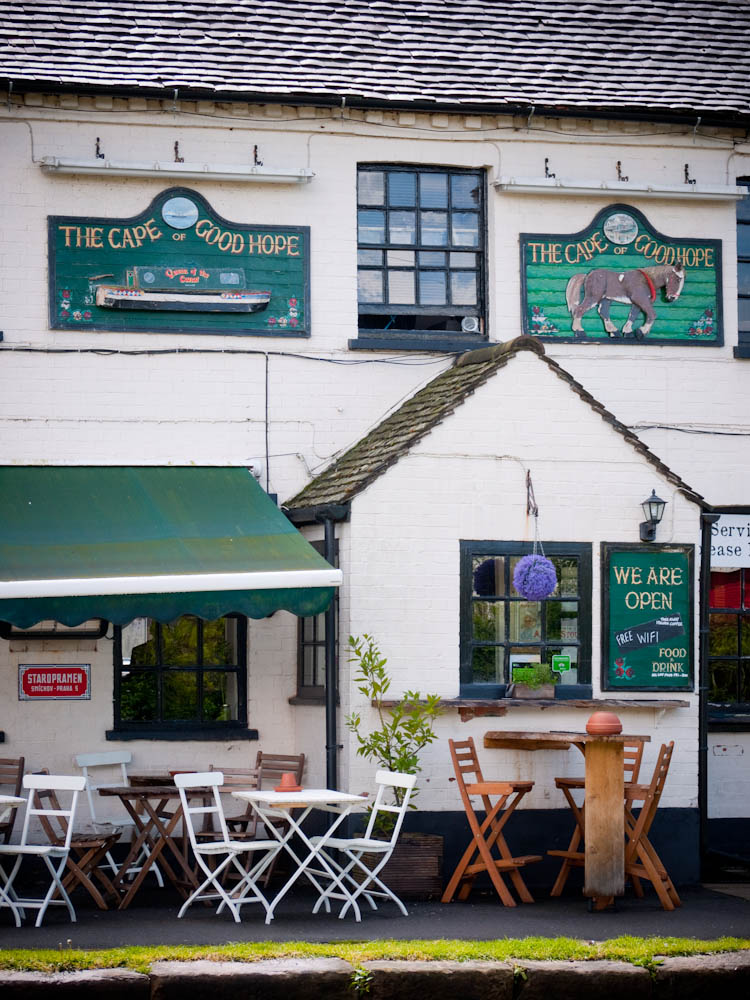 What a quaint pub we sadly didn’t get time to visit, especially discovering that it’s actually run by a group of kiwis! Sorry Steve, Steve and Emma and the Cape Crew! 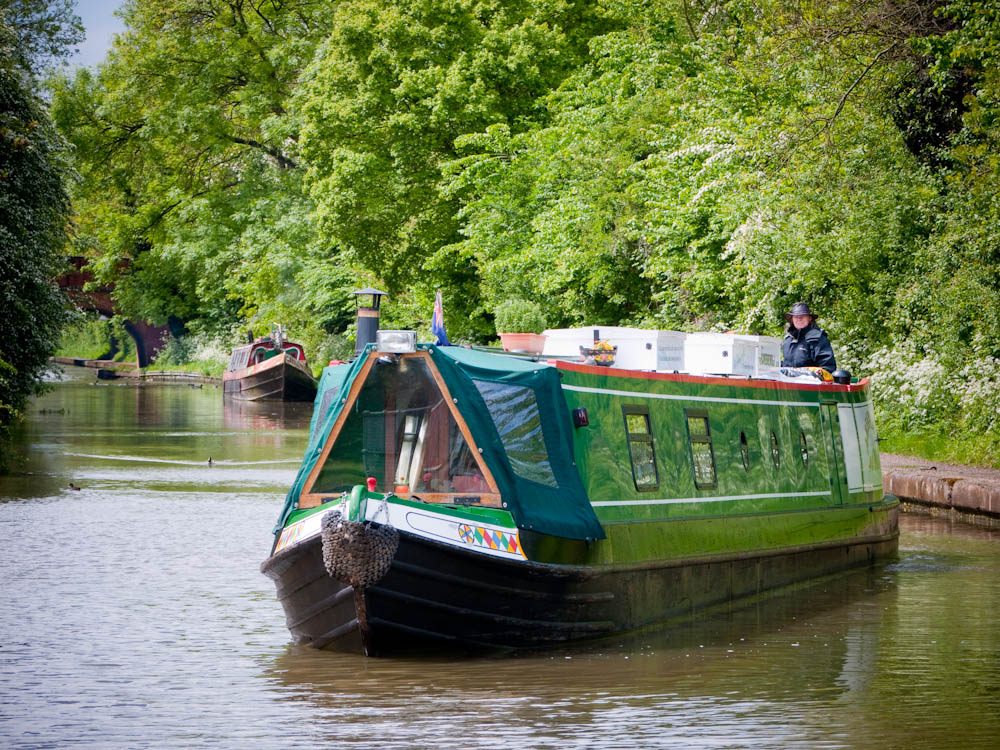 Hovering as we wait for another lock to empty …

The week so far has been amazing – and it’s only Friday! There’s still the weekend to come which holds much promise – expected and otherwise I’ve no doubt.

Not long after we started our journeys on Areandare, we met Leonie and Ray from ‘NB Firefly’ at Calf Heath. They’d been blog readers for a while and had arrived in UK in April 2013 ready to do their own narrow boating and blogging adventures. Originating in Napier, New Zealand, they lived in one of the closest ‘big’ towns to Gisborne, Barry’s home town. Hard to imagine here in England, but that’s a three-hour drive along a mostly winding, single lane highway.

I had a coaching client Wednesday morning, and Barry had a Home Brew Boat order delivery to make. Shortly after finishing my call, I heard the engine of a passing boat and a knocking on our roof. Peeking out there was Ray and Leonie standing on the back of their boat, with a couple of their friends from NZ. They’d already seen Barry and had a chat. 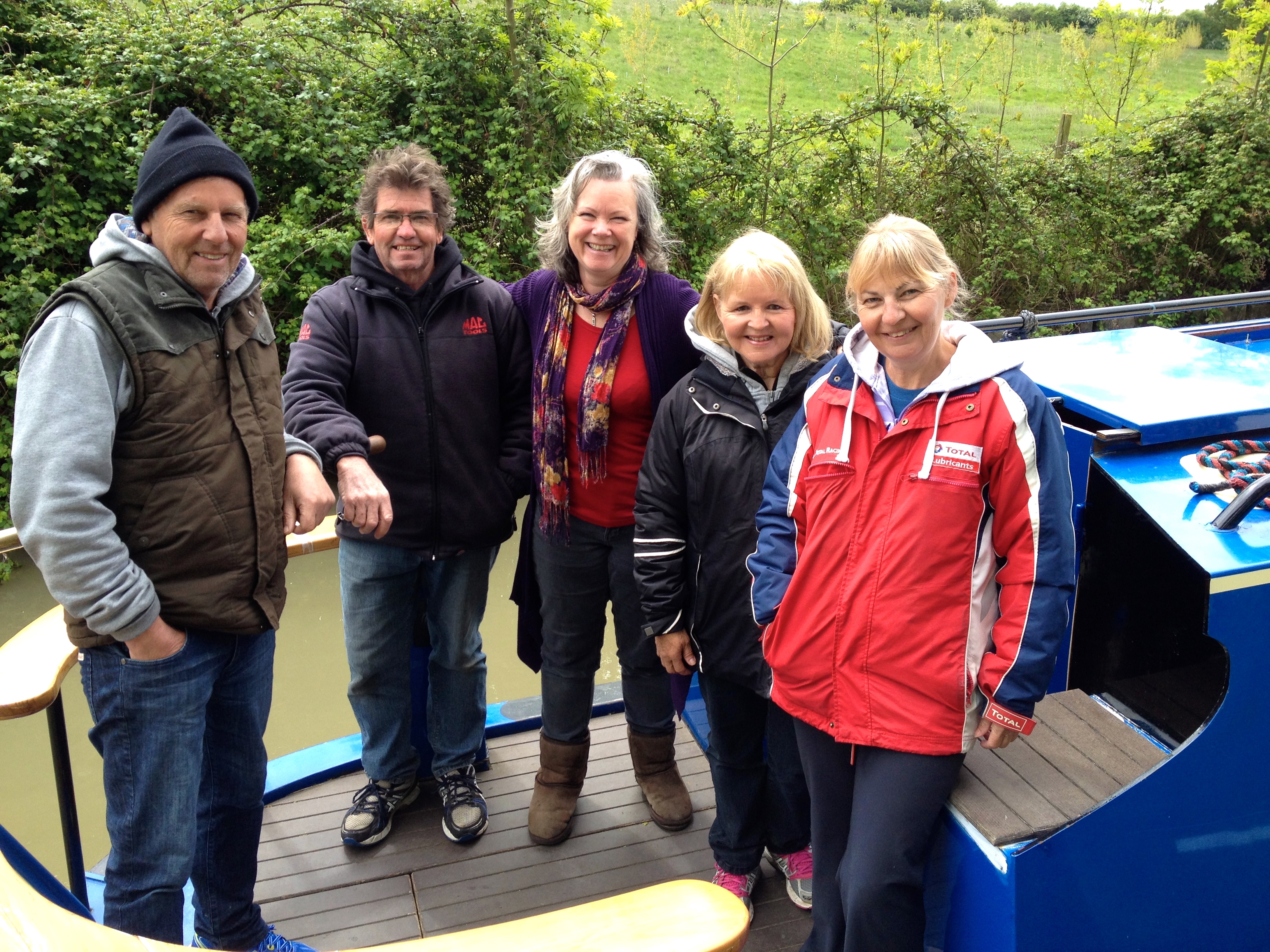 They were all enjoying a final trip on Firefly, delivering it to the new owners. Like Paul and Elaine, from NB Caxton, they’re now the proud owners of a motorhome and are planning a European adventure in the near future.

We wish you lots of happy times exploring the beauty of our neighbouring countries.

Mooring a while later in Braunston, I heard a knock at the side hatch and saw a couple standing with Barry. I looked carefully for signs of recognition but am ashamed to admit I had no idea who they were!

Andy and Sue from NB Festine Lente who have been regular commenters on our blog for many years. Barry met them previously on one of the (many!) times I’ve not been on board. They’ve been cruising for two years now, popping back occasionally to their home on The Isle of Man. 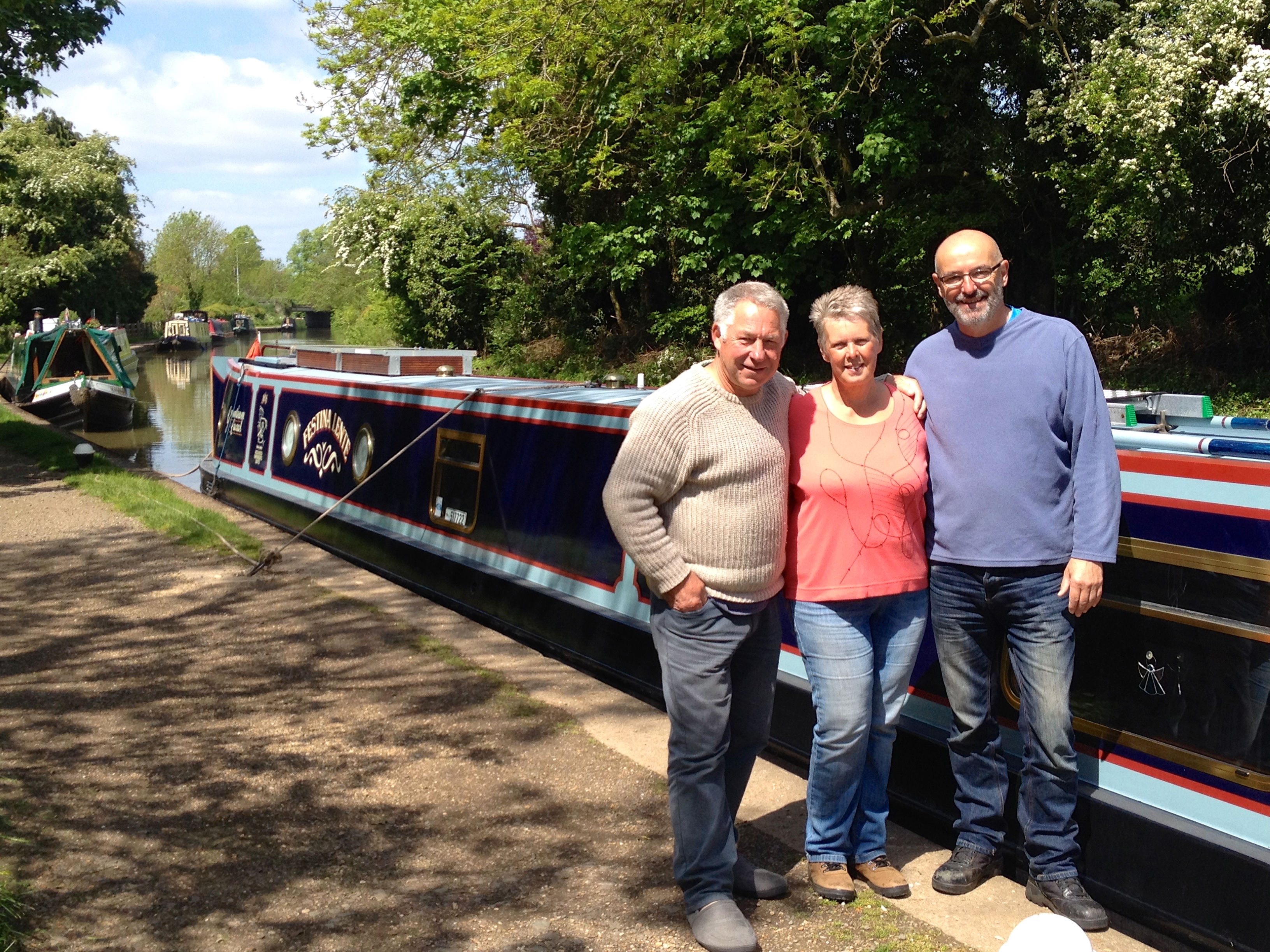 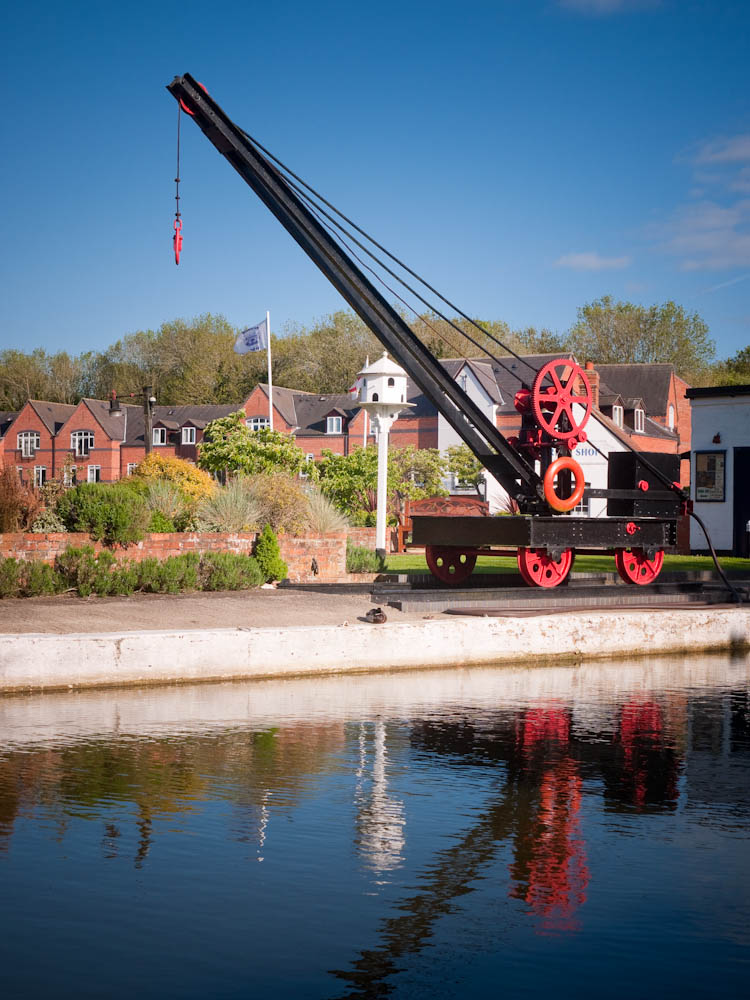 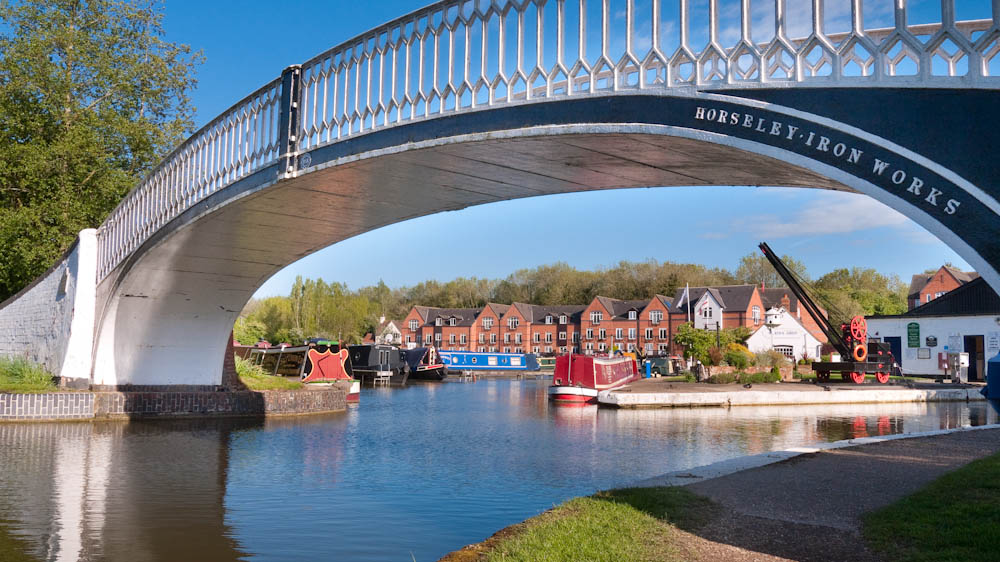 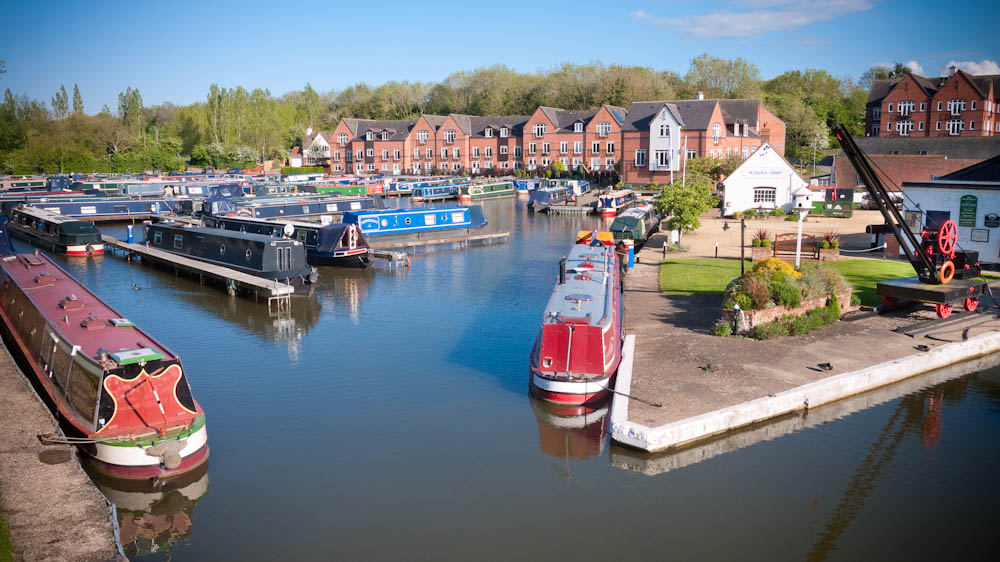 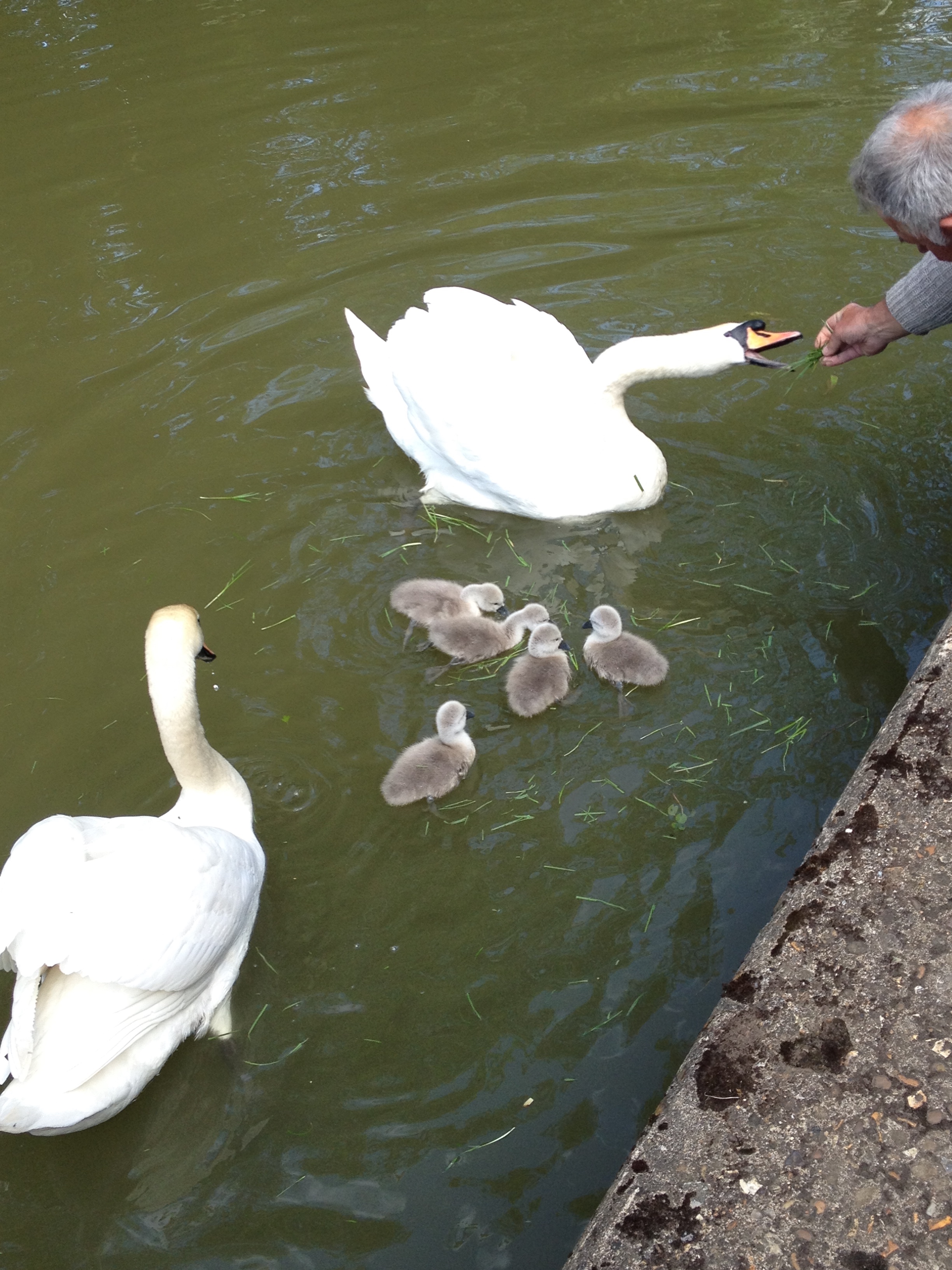 Before we leave Braunston we saw these gorgeous cygnets – Barry the swan whisperer!

We enjoyed a few drinks with Andy and Sue at The Plough in Braunstone on Wednesday evening, then last night moored up nearby and continued getting to know them convivially on the towpath and aboard Areandare. What lovely people – so envious of them being retired at similar ages to us and having an income! 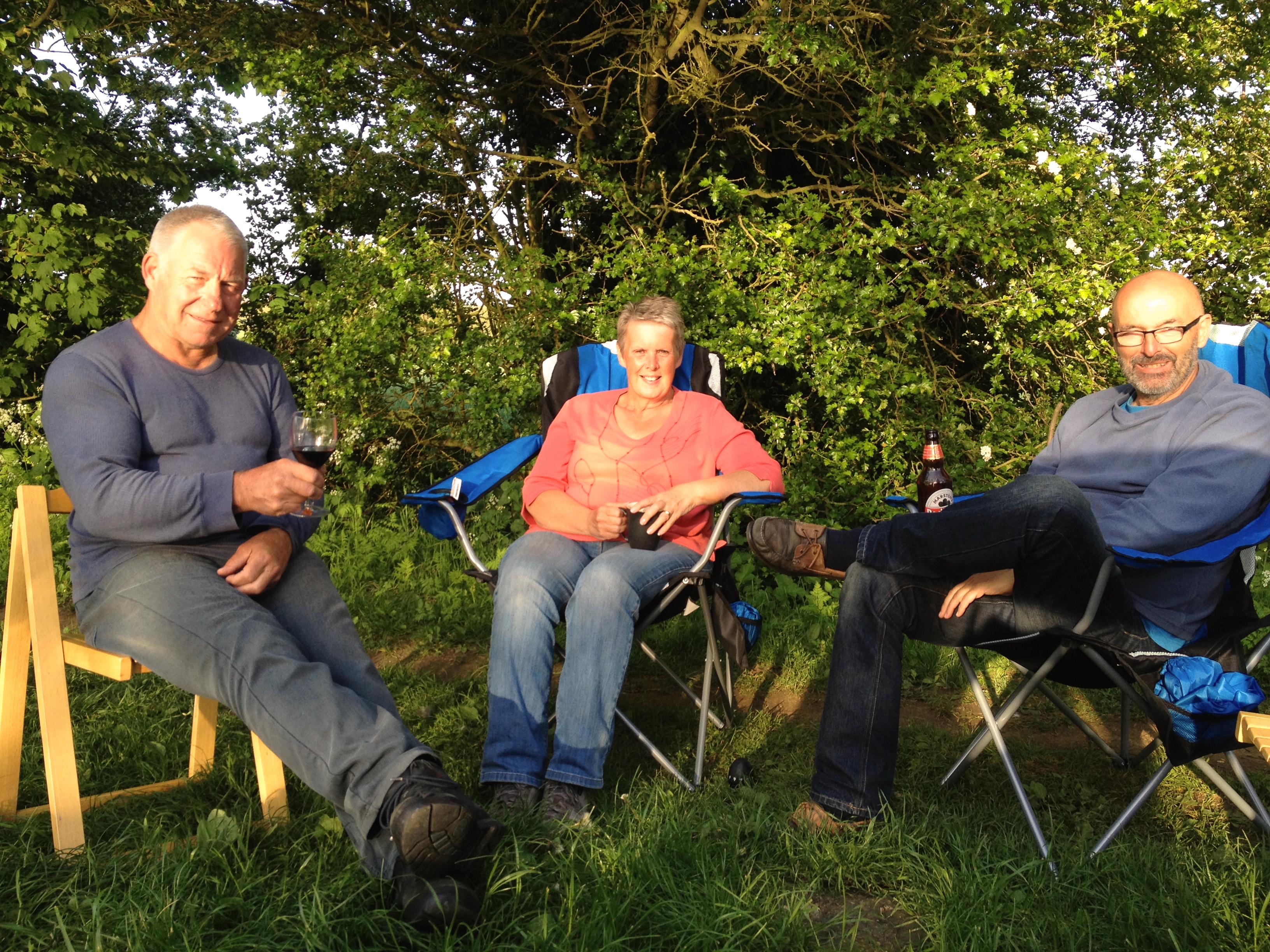 Chilling on the towpath

Then again, if we weren’t trading on board we wouldn’t have met so many people or been in the news …

Humans of the Waterways

You may recall a blog post from Middlewich in April (click here to read), when we spoke of meeting Alice and Adam from Manchester? Their organisation had been given a 12 month contract by CaRT to produce stories of ‘Humans of the Waterways’, and we chatted to them at length about our journeys.

We’d almost forgotten about this until Barry opened up an email yesterday morning and saw our faces smiling back at him!

We ARE the faces of the current CaRT newsletter, and the most recent story from the Tumblr Blog – http://humansofthewaterways.tumblr.com. They’ve written an inspiring piece about us which is very timely as we approach Crick and our upcoming seminar ‘Running a Business on a Boat’ alongside Sarah Henshaw of The Book Barge, and Helen and Andy Tidy of Wild Side. 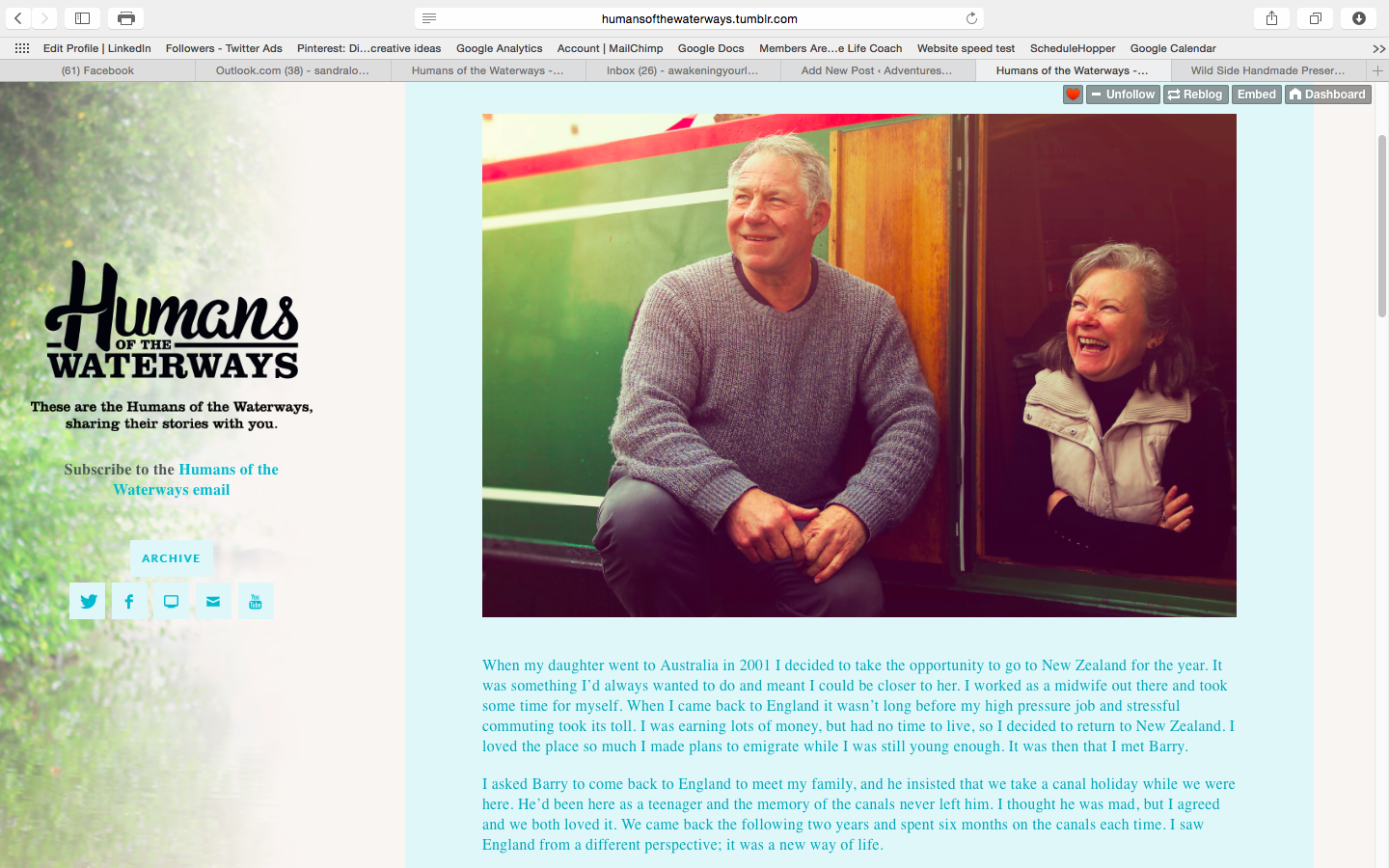 There’ll be much more to share with you from the coming few days so watch this space.

Next week I’m back up in Malpas granny sitting while Barry moves Areandare back up north slowly. Our next event is Funtastic Facepainting at Throckmorton Airshow on Saturday 6th June – though we’re definitely not arriving there by narrowboat!

3 thoughts on “Being human on the waterways”