We’re currently ‘speeding’ along at 3-4 mph to the Crick Boat Show. Barry’s driving in the pouring rain which promises to accompany us throughout the day.

Unfortunately we don’t have the luxury of sitting it out as we’ve 55 miles and 79 locks to get to Crick in time for the show. I’ll be making an appearance shortly kitted out in waterproofs and wellies, ready to do numerous locks …

All being well, we’ll arrive sometime on Friday ready for our slot on the Waterways World panel talking about ‘running a business on a boat’.

I didn’t go to my daughter’s yesterday as planned, because it became too complex with trading and travelling. I’ll be heading up in a week’s time instead, following this weekend’s festivities.

We’ve just experienced another terrific two-days of trading along with Helen and Andy from Wild Side. This time we were also joined by Sue and Ade on the Cheese Boat, who had the pleasure (or pain if truth be told!) on Saturday night of being taught the customary card game of six-handed rummy.

They may never recover after partaking in the competitiveness of our seemingly habitual entertainment.

The festival itself was an enjoyable weekend. On Friday evening the four of us tasted a small selection of the 61 beers on tap in the beer tent – we didn’t get time for the 13 ciders or 7 perrys!

There was even more excitement to be had when Helen, and eventually Andy, got up and danced to Reflections, announcing it’s been 20 years since such an occurrence! They were admittedly an outstanding band. Click on the link and you’ll get to hear them. 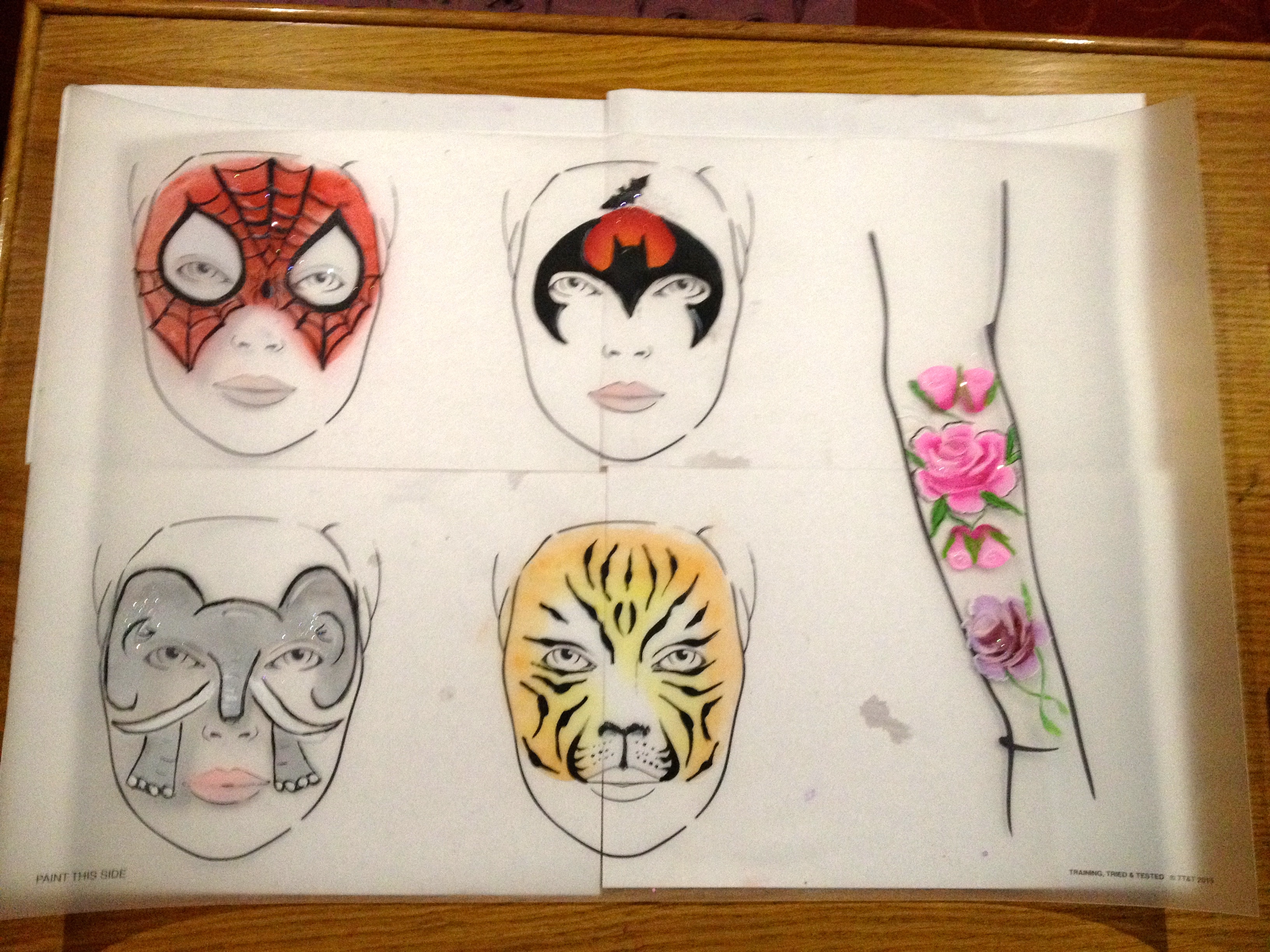 Spider man and Batman were a popular choice 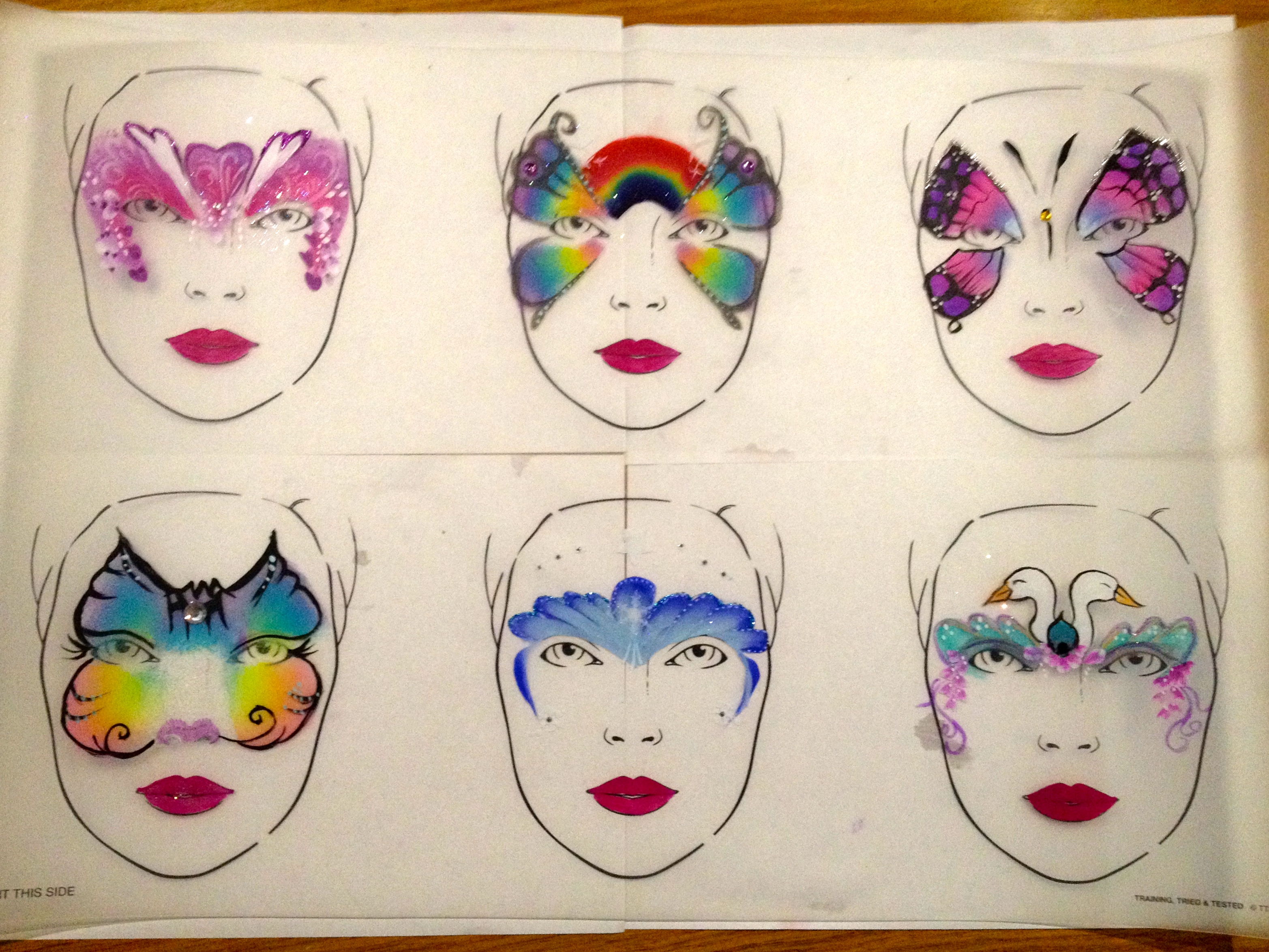 How fantastic are they? They wipe clean (I know they do because I’ve just done it!), so that each event I go to I can choose different designs and themes according to the place or celebration.

My next facepainting booking is Throckmorton Air Show – any ideas on what could be popular there?

The weather wasn’t terribly kind to everyone once again, though fortunately it reminded dry. 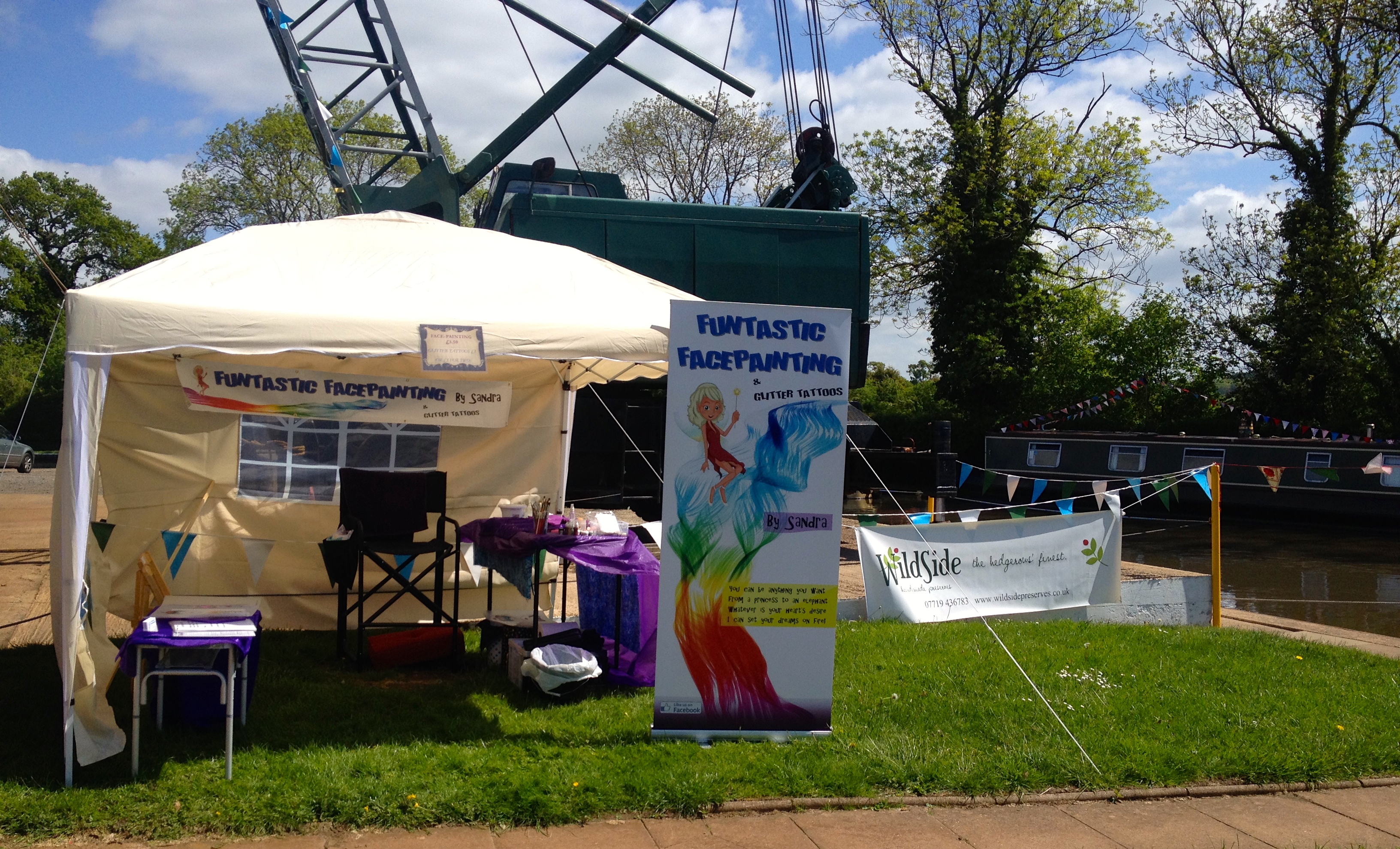 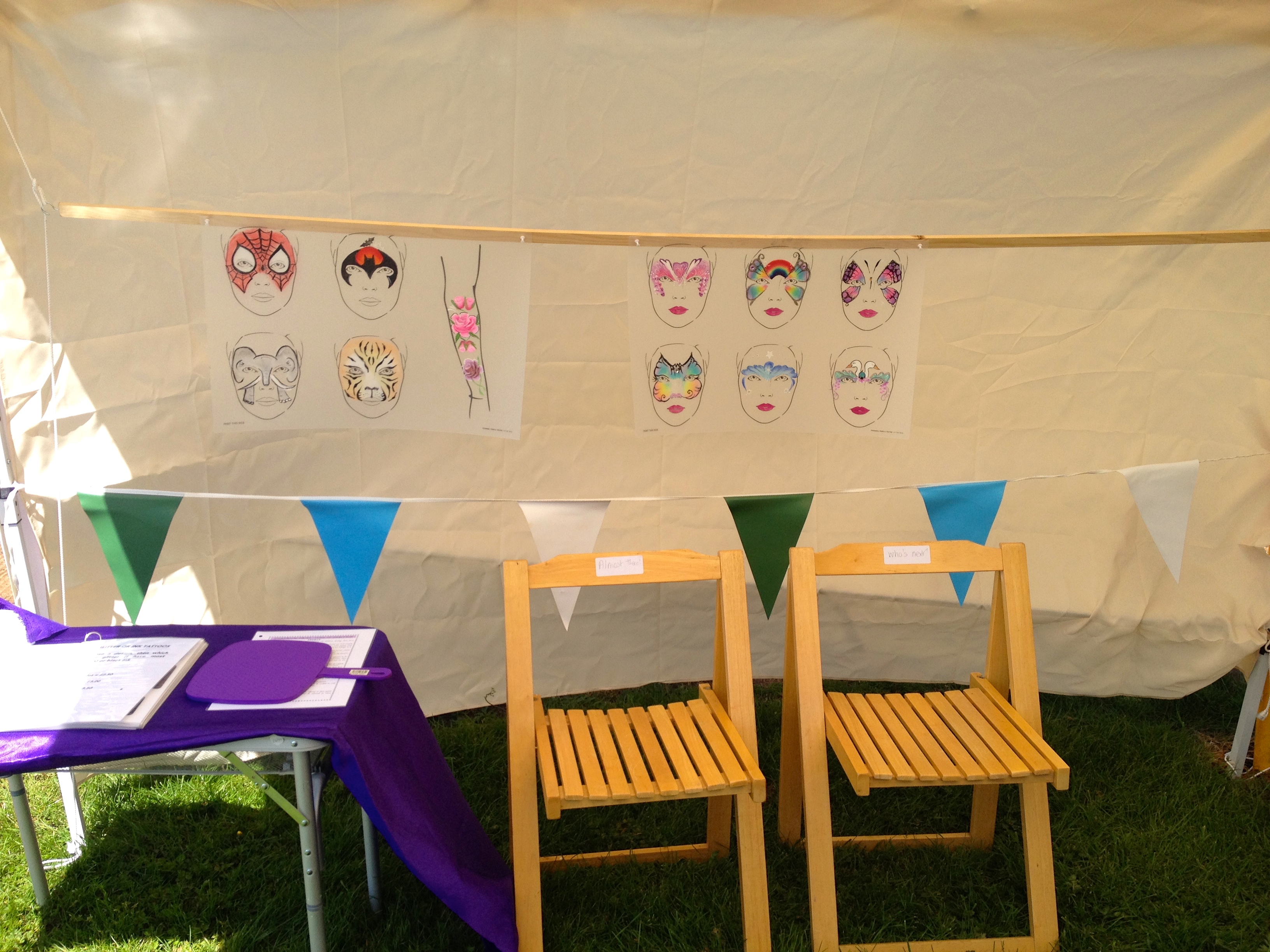 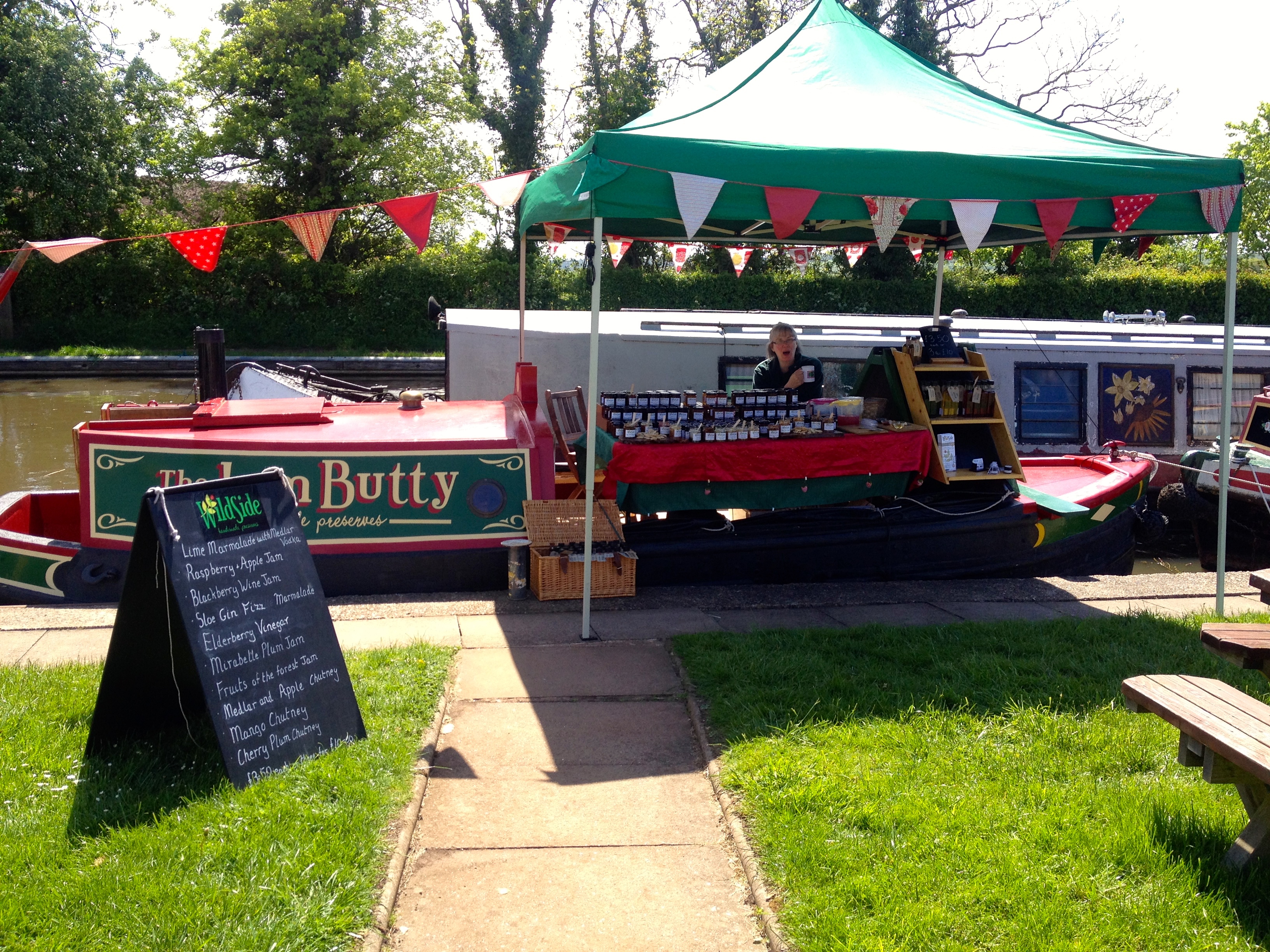 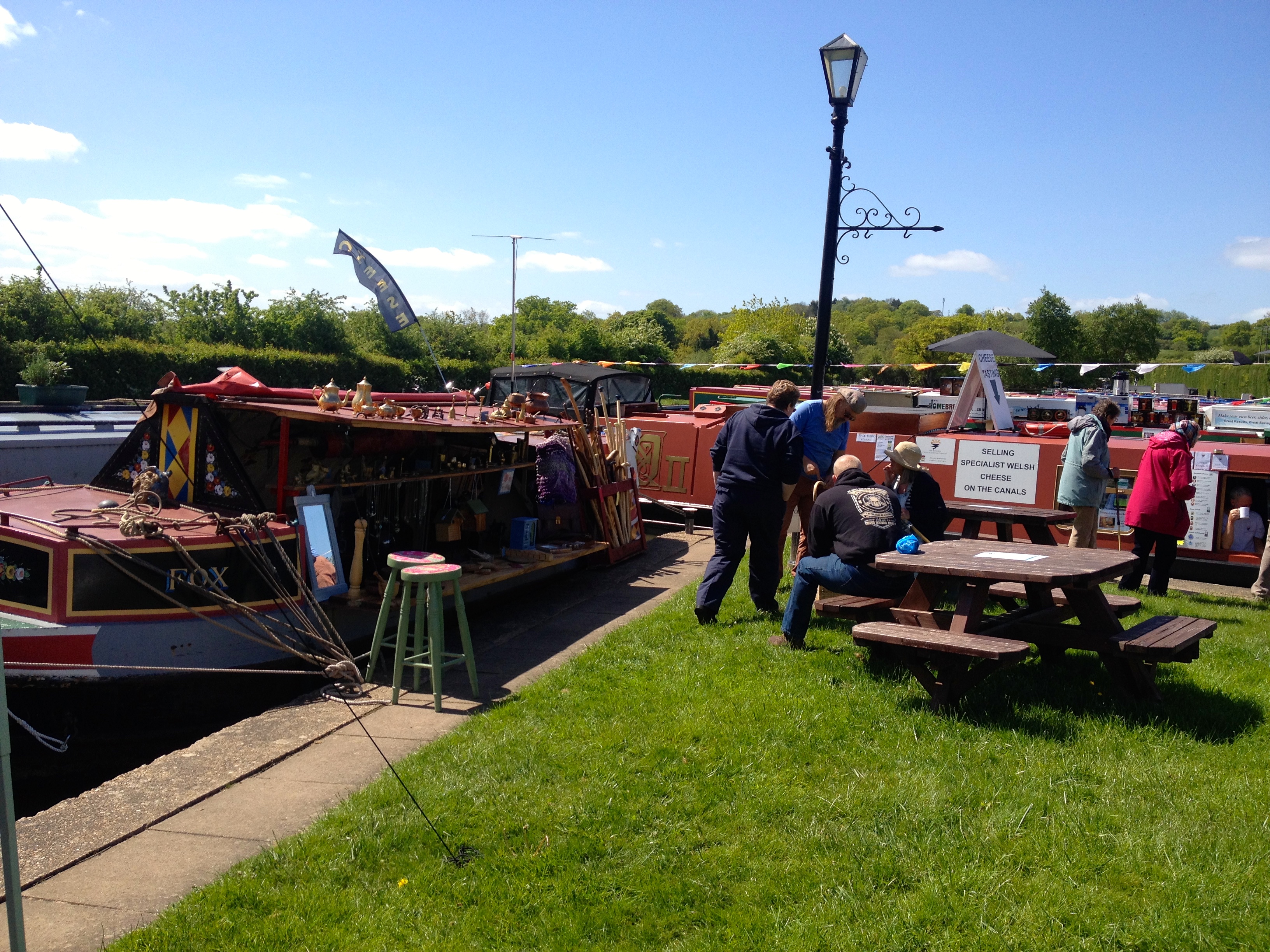 A new trader we hadn’t met before on the left (sorry folks, forgot to get your names!) selling recycled wooden creations and brasses, and Sue and Ade on The Cheese Boat 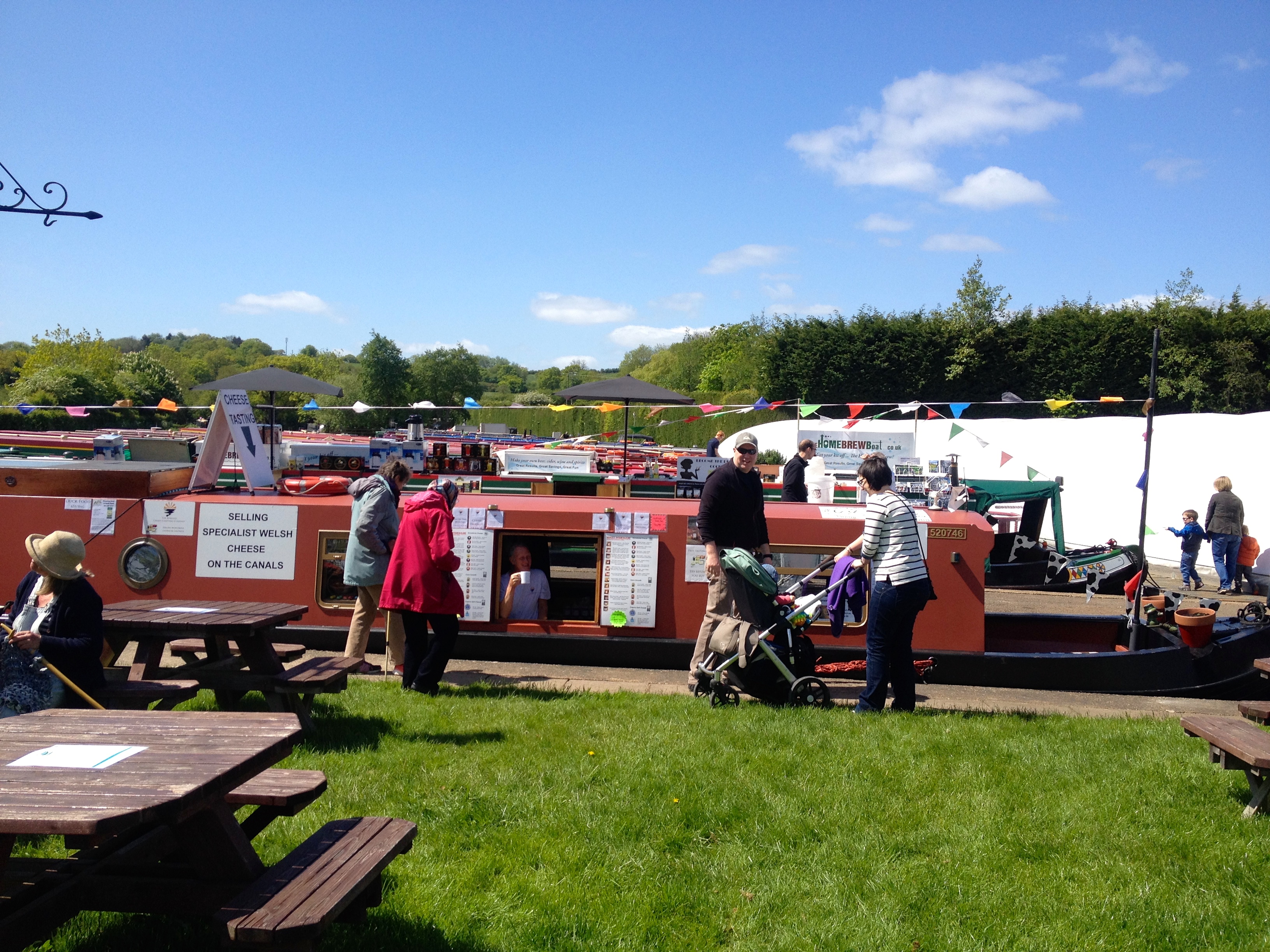 Barry’s nestled in behind the Cheese Boat 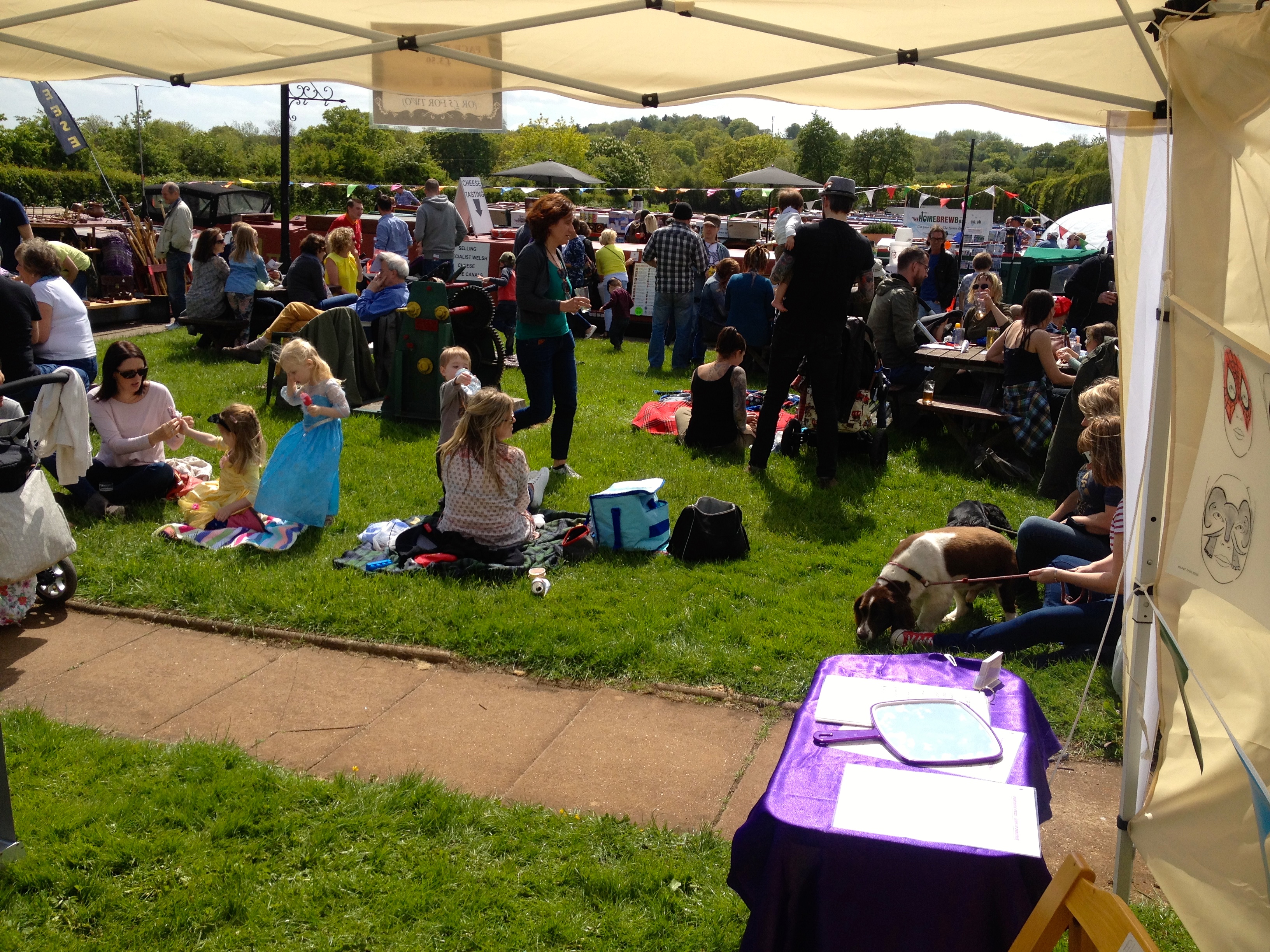 It wasn’t so dry for Barry on Sunday though.

I’d gone for a walk early afternoon to check out the entertainment next to the beer tent. All the trading boats were at the canalside, out of sight.

Returning to my pitch this is the sight that greeted me … 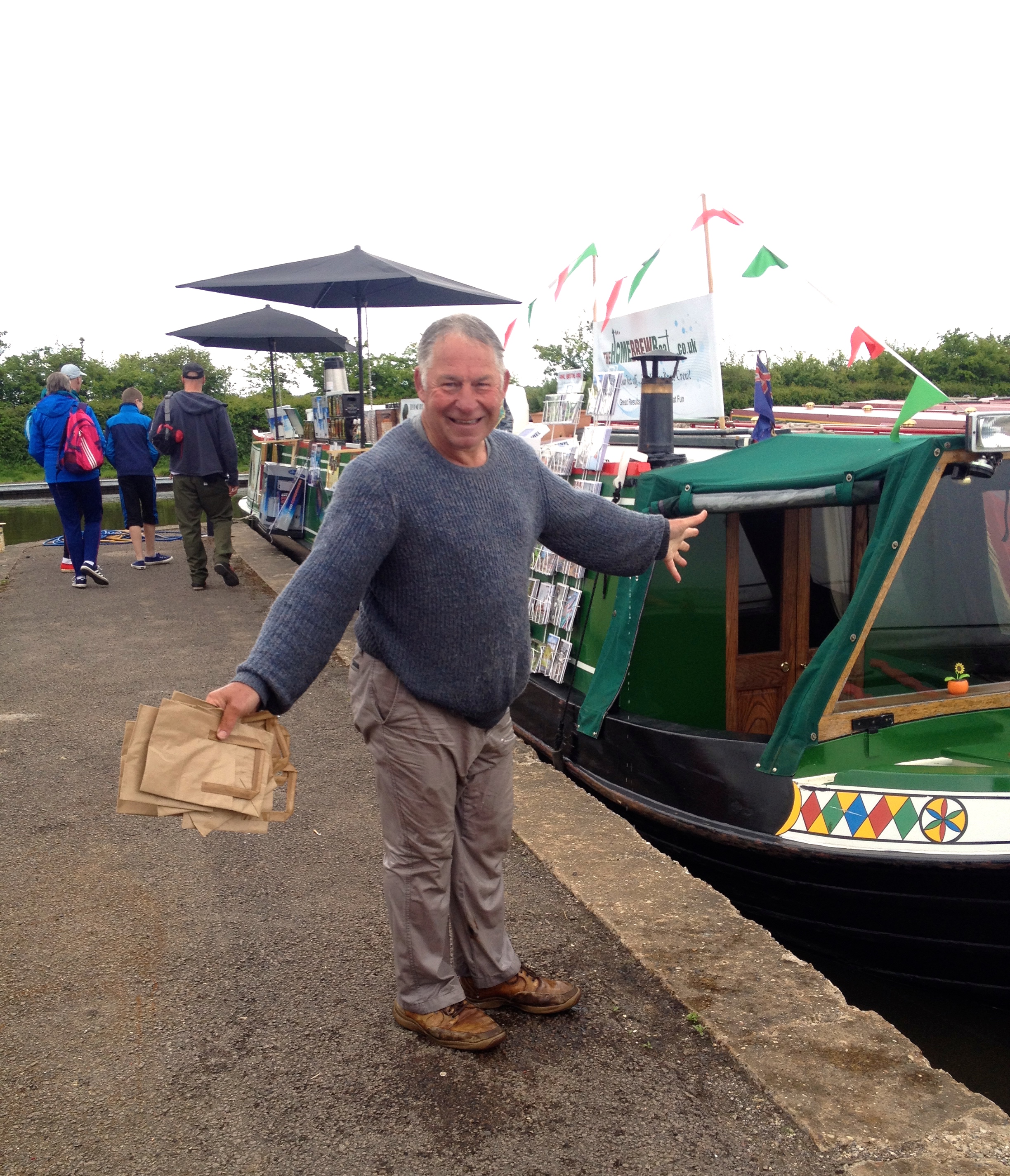 He’d walked along the gunnel between our boat and Wandr’ing Bark to retrieve some paper bags from the roof. Unfortunately when he got to the bow his foot slipped off and he dropped straight down to the bottom of the canal.

Thank goodness he didn’t have his phone in his pocket or his camera/iPad in his hand! The £5 and £10 notes were recoverable. Not so the paper bags …

Barry was still smiling thankfully. A passing woman helped him out – bless you if you’re reading this!

A hot shower and change of clothes and he was back to his amenable self – though he’s still got a problem with his hearing which is concerning.

He did manage to swallow some disgusting canal water, so we’ll be mindful of any symptoms of ‘Weil’s Disease’ over the next 2 to 30 days. It’s a horrid condition, and potentially fatal if not recognised and treated promptly. A rare hazard of our chosen ‘water gypsy’ lifestyle.

Sunday was cooler and quieter.

Apparently the Beer Festival usually takes place on a Friday and Saturday, with the Sunday being added as a special bonus for the 200th anniversary celebration of the navigation of the Worcester and Birmingham Canal. So that probably kept a few people away.

It’s a tight itinerary to get us to Crick for the weekend, but we’re very honoured to have such an opportunity.

We even invested in new t-shirts and had The Home Brew Boat logo printed on them, so we can advertise as we walk around the showgrounds.

We have five minutes to present an overview of our why, what, when and how of running a business on a boat – actually we run THREE businesses so it’ll be an interesting concept to fine-tune the information to five minutes!

We’ve forgone a trading weekend at Burton-on-Trent with RCTA for Crick, gambling on the possibility that the exposure will bring us an increase in trade. Of course it’ll also be fun and a unique experience that we’d be foolish not to grasp.

That’s it from me – almost time to get dressed up in my waterproof gear and do some paddling!