It’s certainly been an interesting weekend here in Stone at another of the Roving Canal Traders Association Floating Markets.

Arriving on Thursday afternoon, we slotted in between ‘Here be Dragons’ and ‘Reverie‘, in the middle of a line of ten trading boats.

Barry set up shop on Friday, and there were a few passers by who stopped to chat or make small purchases. I didn’t get my facepainting gear out as I figured children over three years old (my Public Liability Insurance doesn’t cover me for younger children) would be at school. And it wasn’t too warm …

A beautiful thing happened for Kit and Mike, on the narrowboat ‘Here be dragons’, during the festival. A local photographer stopped by and gifted them a print of Mike and their dog Charlie, that he’d taken while they were at the Stone market last year. It’s such a stunning photo. 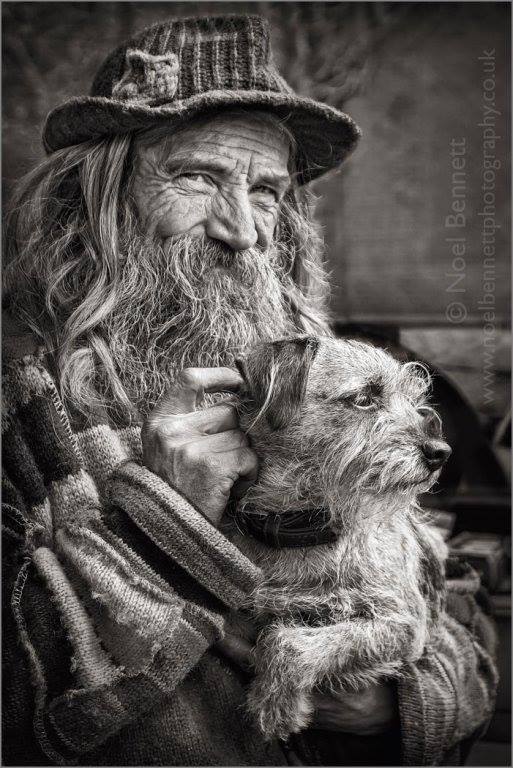 On Saturday I braved it eventually, despite the clouds and coolness, but against my better judgment as I had an inkling rain was on its way. Sure enough, five minutes after setting up the first drops fell. I managed to get most things covered and ran to the safety of the boat – I didn’t want my flowers to wash away … 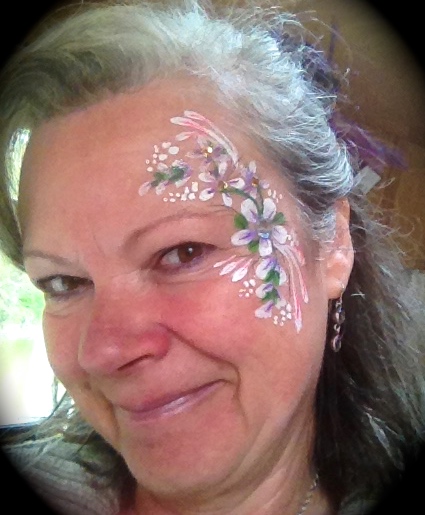 Feeling a little flowery – unlike the weather!

I lasted another hour or so, dodging two further downpours, before deciding it wasn’t worth risking my expensive kit getting ruined and packed up.

Our new friends Barry and Jan from the Art Boat came to the boat for a few drinks last night which was lovely – we even had the fire on as the temperature dropped so much and we’d all got a bit wet during the day.

Today the sun has shone in a bright blue sky. I needed to do a bit of grocery shopping for Barry this morning and of course the supermarkets don’t open till 10am. The location of the Floating Market was a good 25 minute walk into town, so by the time I’d done that and got sorted, it was coffee time. 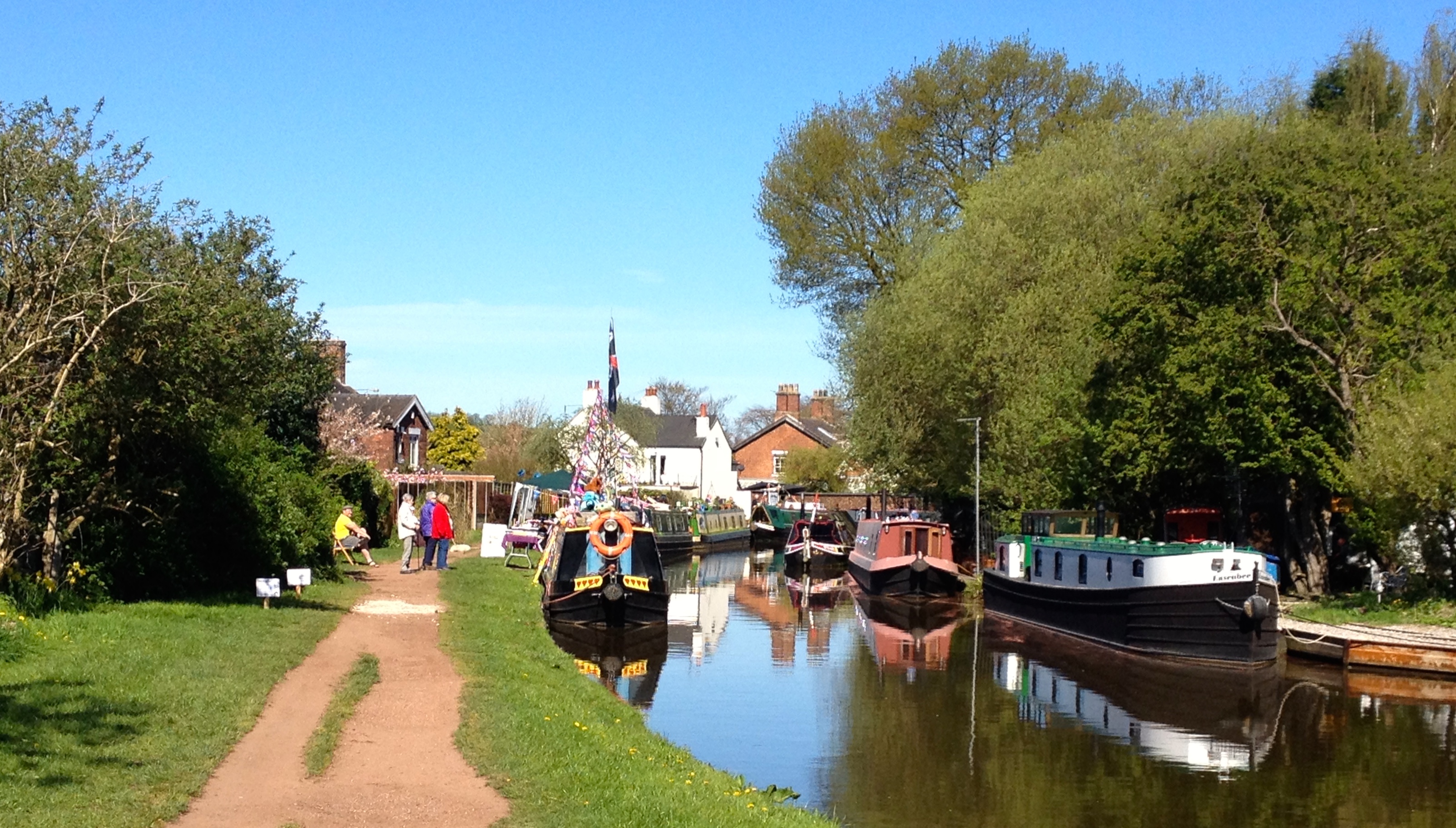 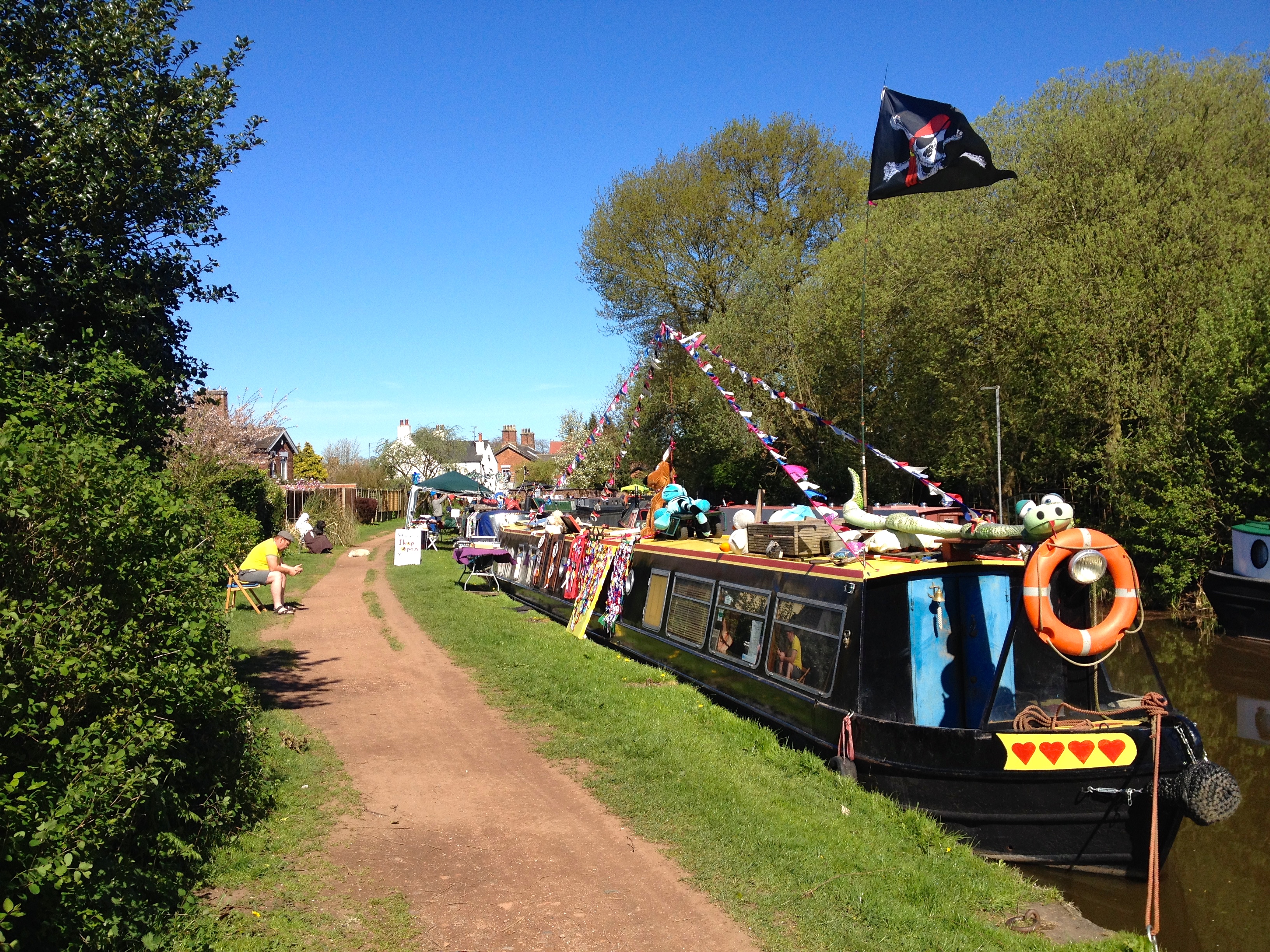 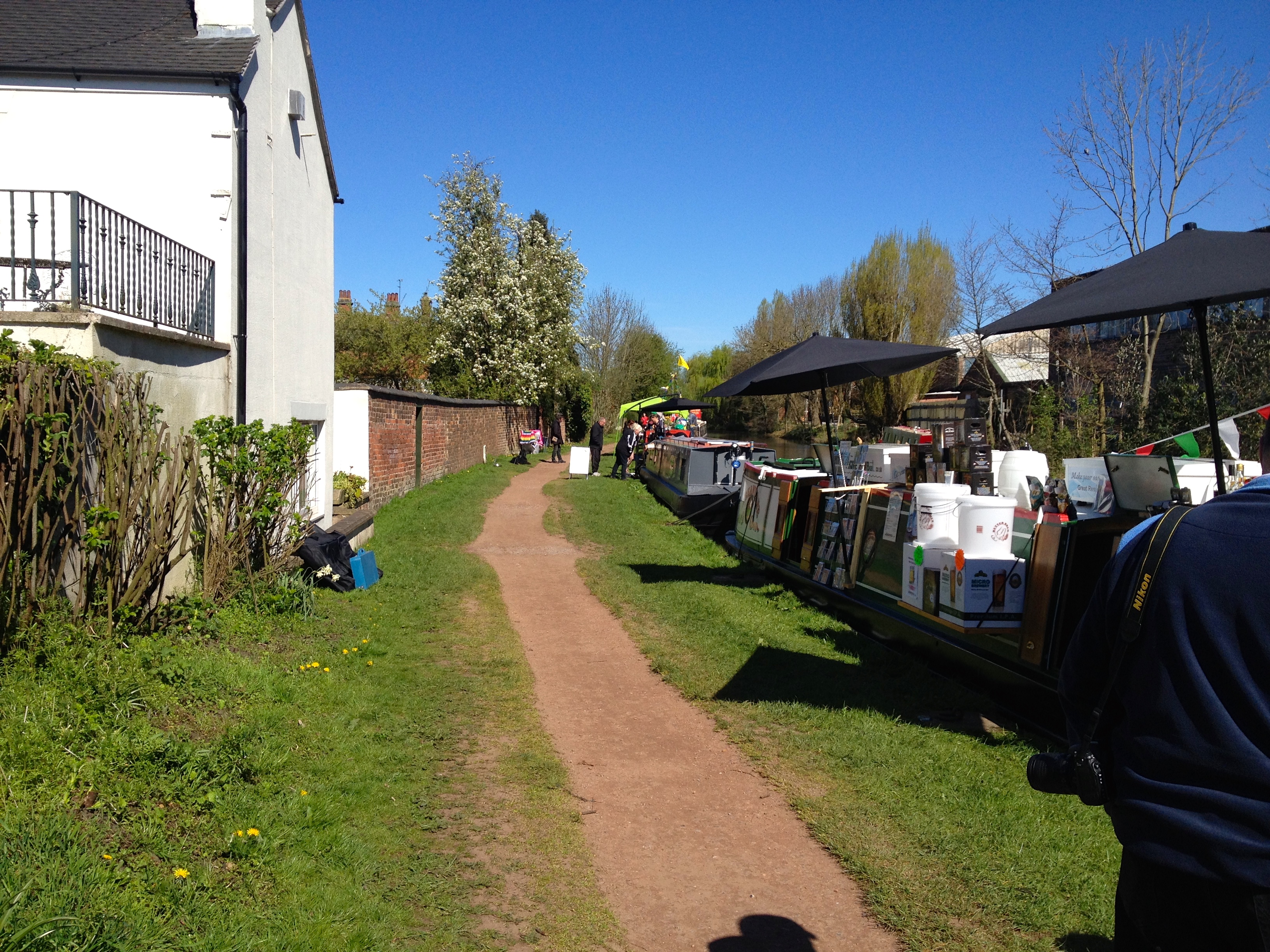 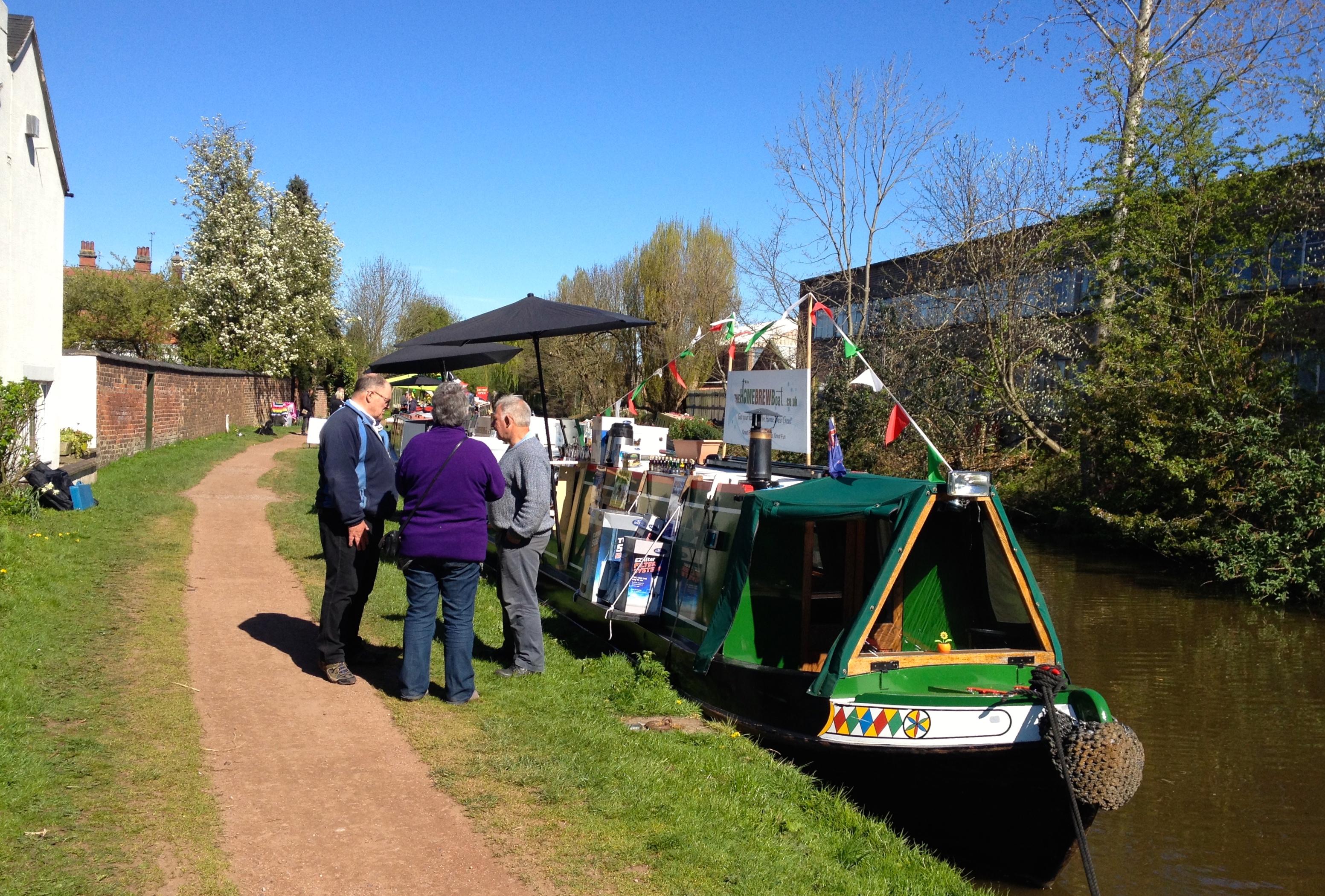 Not long after returning to the boat, our expected visitors Simon and Jane arrived. I haven’t seen Simon for about 24 years, we got in touch on Facebook last year and he’s been reading the blog since then. He saw that Barry needed a hand next week so got in touch and offered his services for Tuesday’s travels.

There’s likely to be a few more shots of Simon on the next blog – if Barry gets time to take any photos on his long journey from Stone to Droitwich! Thank you Simon, good to see you again and lovely to meet you Jane. 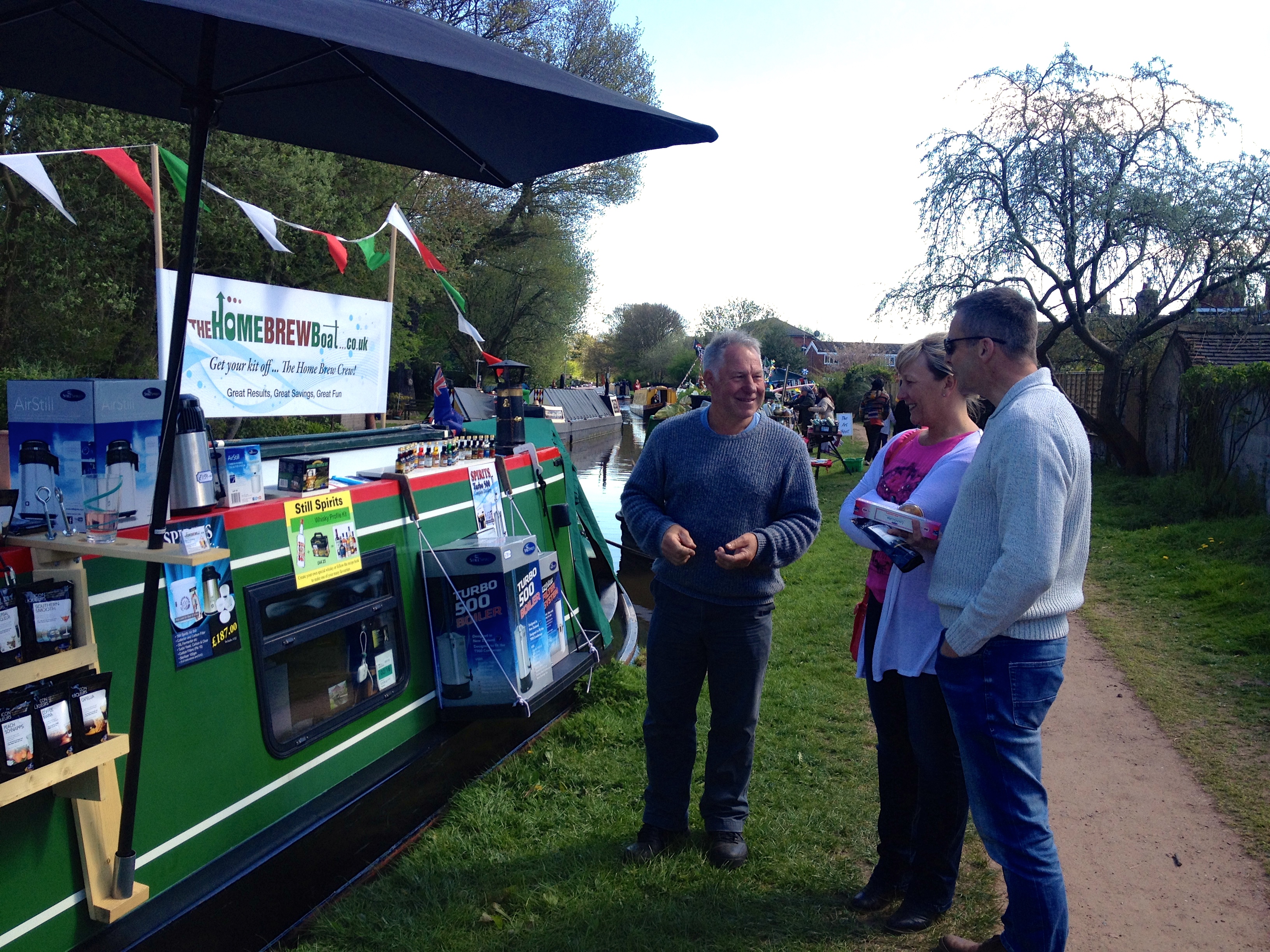 Simon and Jane chat with Barry about all things brewing

A short while after I’d cooked oatcakes for us all for lunch (it’s a Staffordshire speciality if you’ve never heard of them, there’s even an ‘Oatcake Boat‘!), a familiar couple approached with two small dogs.

“Paul and Elaine!” I shouted excitedly!

Paul got in touch with us in 2009, from Manly in Sydney, after reading our blog. He and Elaine emigrated to Australia many years ago, met there and married, and Paul had a long-held dream of returning to England for a while to cruise the canals. I seem to recall Elaine took a bit of persuading!

In 2010, on our way to UK for our second six-month canal journey, and on the return to NZ, we had a stopover in Sydney to stay with Barry’s younger brother Peter. On each visit we caught up with Paul, the second one we met Elaine. They beat us back here by a year, and spent two years meandering in their narrowboat ‘Caxton’. But our routes never aligned. Paul continues to write their ‘NB Manly Ferry’ blog.

They’re still in UK, and are about to embark on a second motorhome adventure. The photo at the top of this post is of Paul and Elaine, with their two dogs Sam and Bombo (don’t ask which one’s which!). The other dog is Rico, the other Barry’s dog, who seems to have taken a liking to me – nothing to do with sausages I’m sure …

Fantastic to see you both – thank you so much for coming to Stone and hope we see you again in the not too distant future.

Barry’s been ‘working’ hard with The Home Brew Boat and had a few sales, as always lots of interest so maybe we’ll have a few on-line orders to come.

Not a Stone’s throw away!

Our next festival is St Richard’s in Droitwich, which will mean some very long days for Barry from this evening until Thursday night. Fingers crossed that the River Severn isn’t showing a red light when he (hopefully WE!) gets there.

I’m now back in Malpas. The railway station literally was almost a stone’s throw from the market, and the most delightful building I had to take a photo to show you … 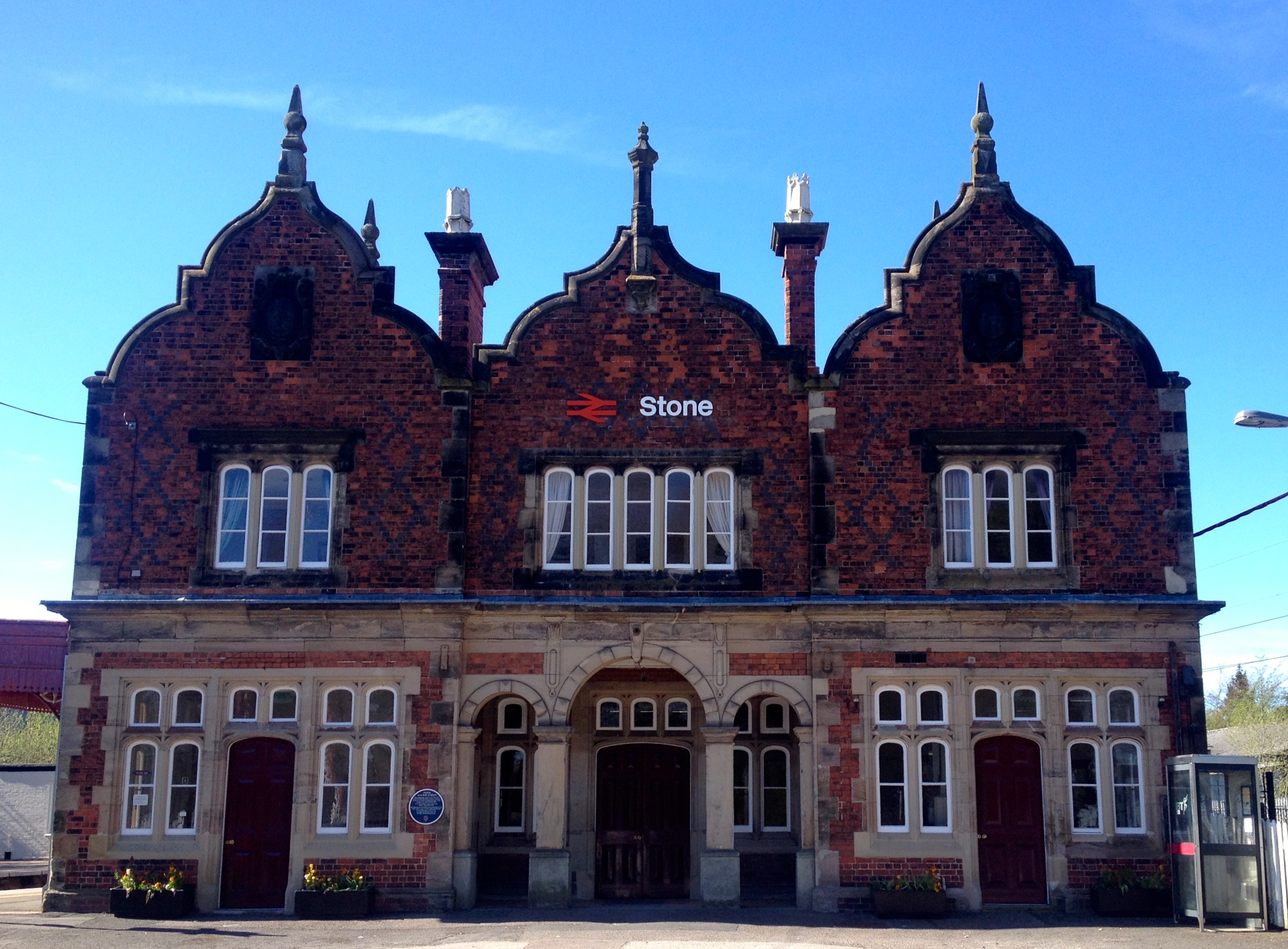 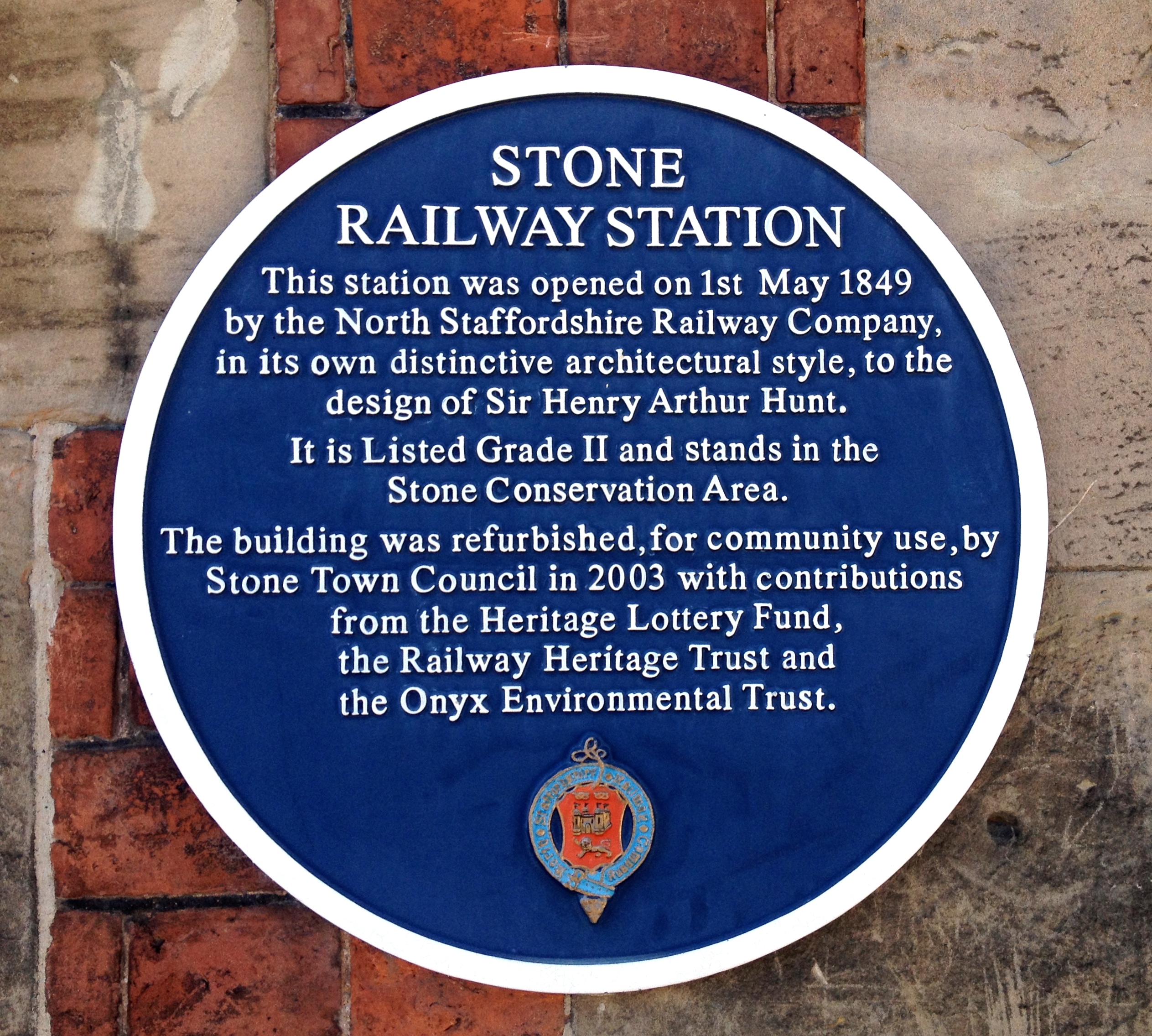 And Barry’s hopefully a number of miles south of Stone as I type. Driving to Droitwich would take about two hours. By narrowboat four days is pushing it which seems ridiculous but that’s why it’s called the fastest way to go slowly …

One thought on “Showers, sunshine and socialising in Stone”