Spring is really showing herself at the moment.

The trees are all suddenly sprouting their leaves, the blossom has bloomed, the birds are singing merrily, the bees are buzzing and best of all the sun is shining and even becoming quite warm!

We’d aimed to travel to Barlaston yesterday afternoon, on our way to Stone, but Barry ‘overshot’ the moorings so continued on. That’s not strictly true. There was a mooring but it was too near to a train-line.

Not wanting to go all the way to our weekend trading moorings in Stone until today, we finally pinned up in a good stretch between two locks. Chosen because of it’s country feel, and lack of hedges or large trees to obscure the fading rays. With a wide grassy towpath alongside too, it meant Barry could do a spot more painting on the boat, clean the side we’ve been avoiding – and best of all have an evening sitting outside.

Not long after we’d stopped another Barry, and Jan, from one of the art boats, saw us and decided to spend the night with us – so to speak!

We had a jolly evening sampling Barry’s beer and wine, and star gazing on an amazingly clear night.

There was a stunning crescent moon that we all delighted in seeing it’s craters more closely with the binoculars my dear dad had given Barry, Venus was shining brightly as was Jupiter, and I spotted Sirius, the ‘Dog Star’ – the brightest in the solar system. No-one actually believed I knew such things, until Barry used the app on his iPad and said in amazement I was right!

Back in New Zealand, many of Barry’s friends spend a few weeks camping ‘on the coast’ in January each year. On clear nights, we’d sit and chill, watching the stars and waiting for satellites overhead.

It was far easier there, because we didn’t have ANY planes flying to confuse us as to which was a satellite and which was a 747 filled with families on their way to a package holiday in Mallorca!

Eventually, I spotted one. Then another. Then Barry saw another. I think we found five all together over the course of about half an hour, at just the right time when the sun’s gone below the horizon but is still reflecting on the satellite.

Apparently there’s ‘a few hundred’ of these currently orbiting the earth – here’s what Wikipedia has to say, it’s fascinating!

About 6,600 satellites have been launched. The latest estimates are that 3,600 remain in orbit. Of those, about 1,000 are operational; the rest have lived out their useful lives and are part of the space debris. Approximately 500 operational satellites are in low-Earth orbit, 50 are in medium-Earth orbit (at 20,000 km), the rest are in geostationary orbit (at 36,000 km).

So look up into the sky, if you’re away from the light pollution that obscures the possibility of seeing these in a lot of places, and on the few occasions we get a clear sky, and see if you can spot one watching us watching them!

Our spontaneous trading at Westport Lake last weekend with a few other lovely boating businesses went very well. It’s such a popular spot, you’d not imagine such a place was amongst the hustle and bustle of a quite industrial area.

We met some new traders Dan and Kerry-Leigh, who are a little different to the majority in that they’re a young couple in their late 20s to early 30s doing their best to make a living while moving around. You’ll find them on Facebook under ‘Reverie‘ so check them out and give them some support. Good on them for not getting sucked into the ‘norm’. 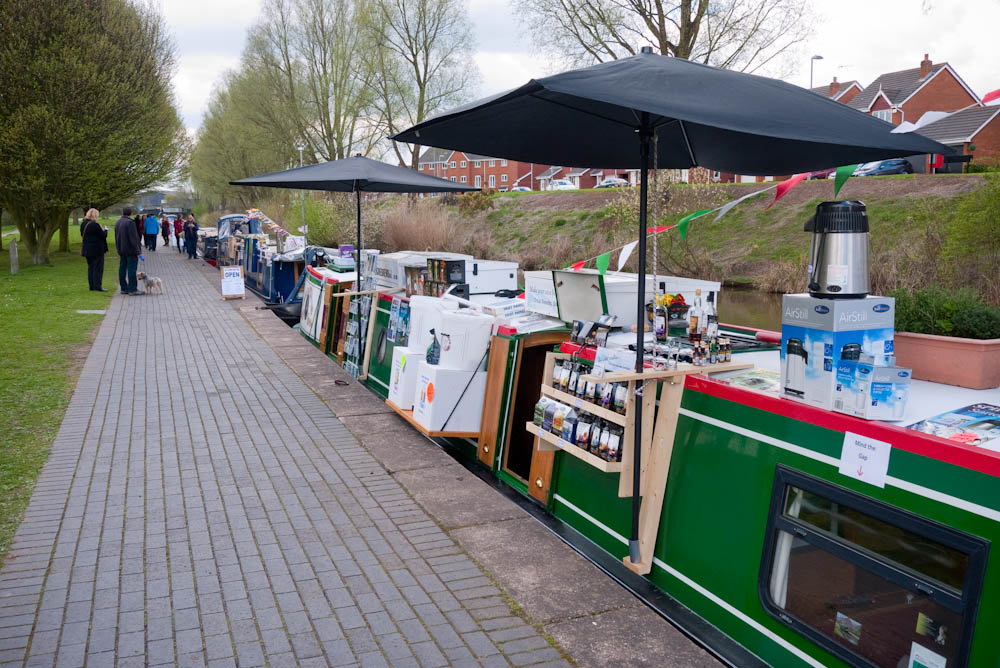 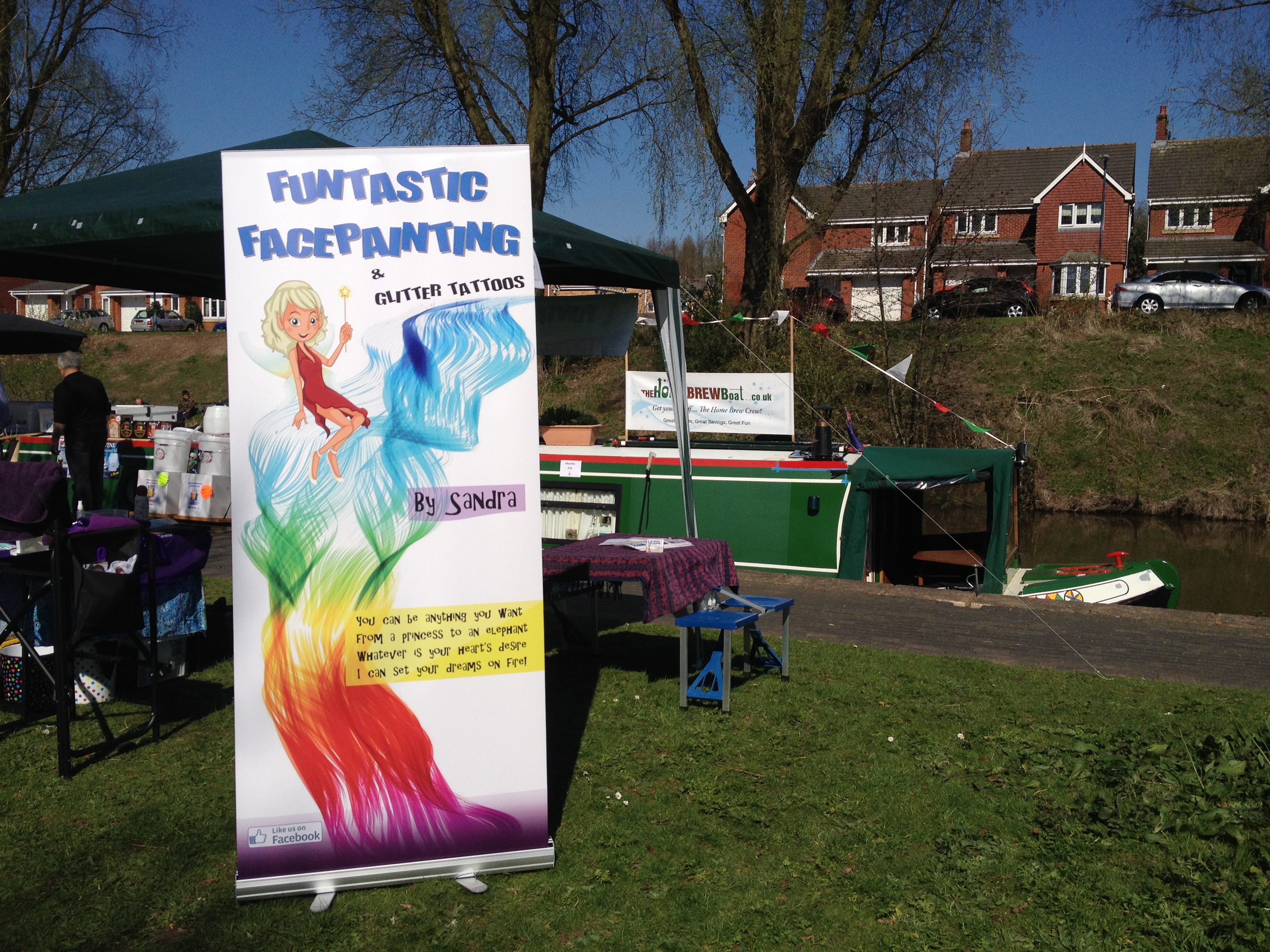 A great spot for both our businesses

Today we’ll meander the short distance to our reserved mooring above Lime Kiln Lock in Stone, ready to trade over the weekend.

I’ll be heading over to my daughter’s on Sunday evening to do more granny sitting, as my eldest grandson is having a small operation on Monday if all goes well.

Barry will then be motoring speedily towards Droitwich for St Richard’s Festival – where he’s the ‘face of the festival’ so may get overcome by fans wanting his autograph. Maybe in his dreams … 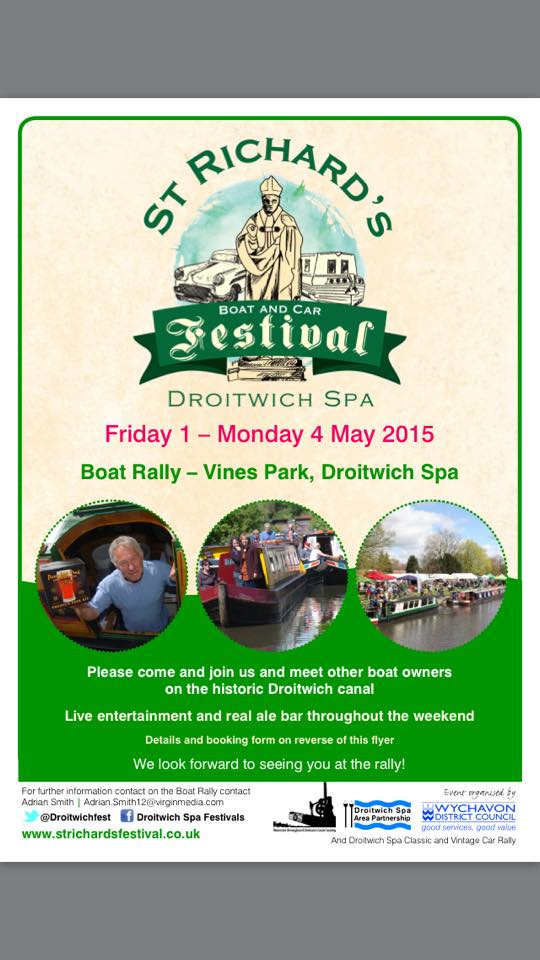 Hopefully I’ll find a way to re-join him mid-week, potentially in Kidderminster!