A lovely lady called Pip Norton contacted us a few months ago, to ask if we’d be interested in being a part of a documentary she’s producing about Roving Canal Traders.

We didn’t hesitate to say “Yes please!” – both to increase our visibility and to promote the possibilities available to people to live and trade on a narrowboat.

Pip has been waiting until she had enough funding to film us, and got in touch again recently to say she’d be coming to film traders at Stoke Bruene and The Black Country 13th/14th September.

She has a FB page set up (you can find it here – click on and ‘like’ the page please and give them some more exposure), and is hoping to be gaining more support through a process known as  ‘crowd funding‘ in the near future. If you’ve not heard of this it’s “… the practice of raising funds from two or more people over the internet towards a common Service, Project, Product, Investment, Cause, and Experience or SPPICE.”

We hope she’s successful and look forward to seeing the finished product in the not too distant future.

Pip and her sidekick Anna arrived to film Barry around 10am on Sunday, with a list of questions to ask … Anna, Pip and Barry get ready for filming Pip interviewed Barry who was unashamedly nervous. I don’t recall ever seeing him so stuck for words. He’d briefly read through the questions Pip would be asking, five minutes before the interview. One of the last ones asked about canal related anecdotes – Barry was so put on the spot, he couldn’t conjure up a single one!

After Barry’s ten minutes of focus, they then thought it’d be a good idea to interview me as the social media coordinator for The Home Brew Boat. I basically talked about the history of setting up businesses while living aboard a narrowboat and travelling the system, and how I market them on Facebook, Twitter and through blogging. 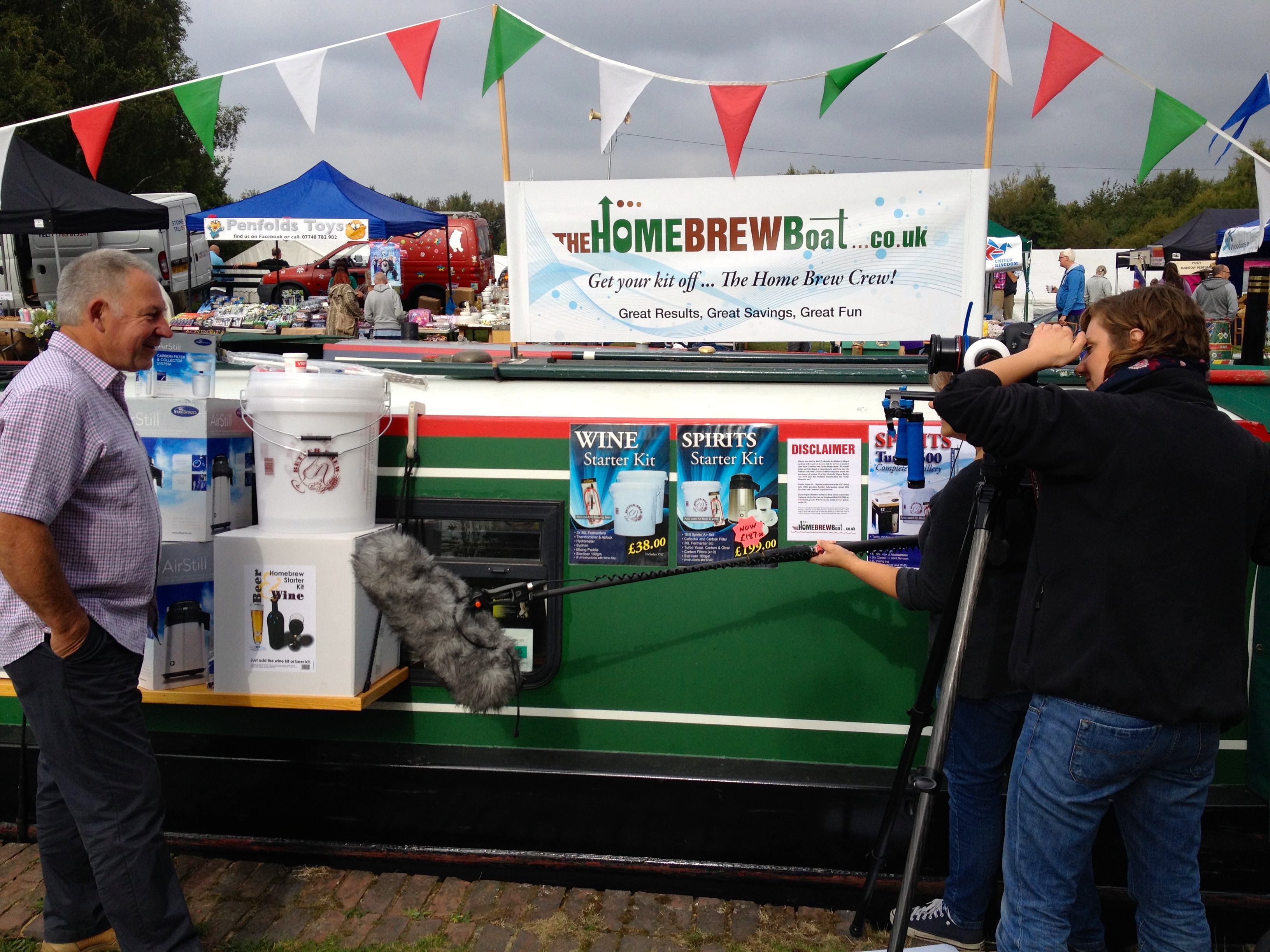 After they’d finished with us, it was time for Wild Side. They got some fabulous footage of Helen and Andy chatting to their customers, and then a fascinating interview with Helen about how she came to be a roving trader (if you don’t know the story, it’s an intriguing and encouraging tale of how changing your perspective on unexpected traumatic events can make a negative into a positive). Filming the Wild Side crew trading from their Jam Butty Lots of tasters to be sampled before buying Chilled out for her interview – but then she was with a TV camera crew only a week previously! Such a star, she takes it all in her stride …

Barry had another great day’s trading, while I wandered around the festival site, entertained my eldest daughter and grandson, and enjoyed catching up with another couple of ‘old’ friends … 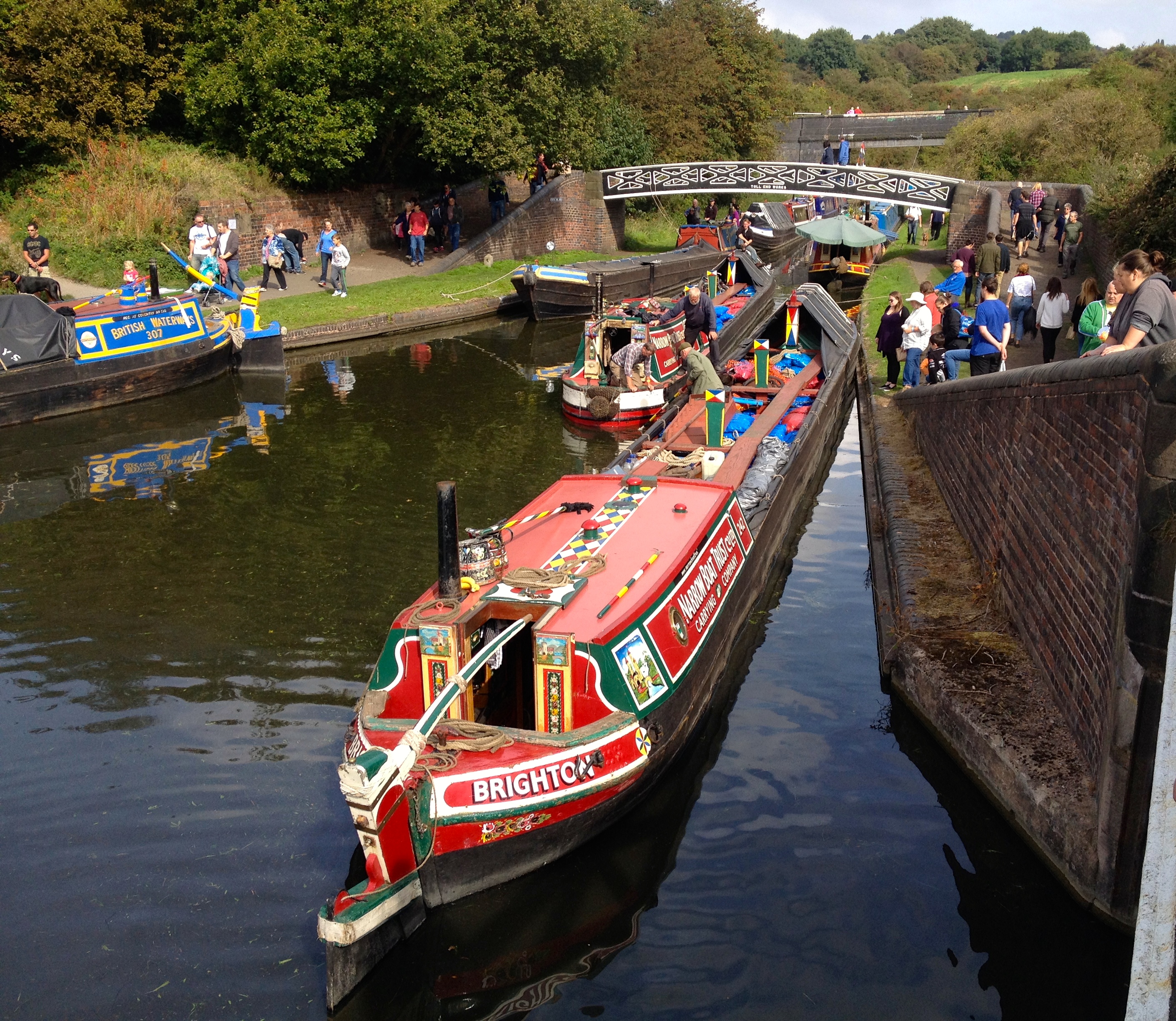 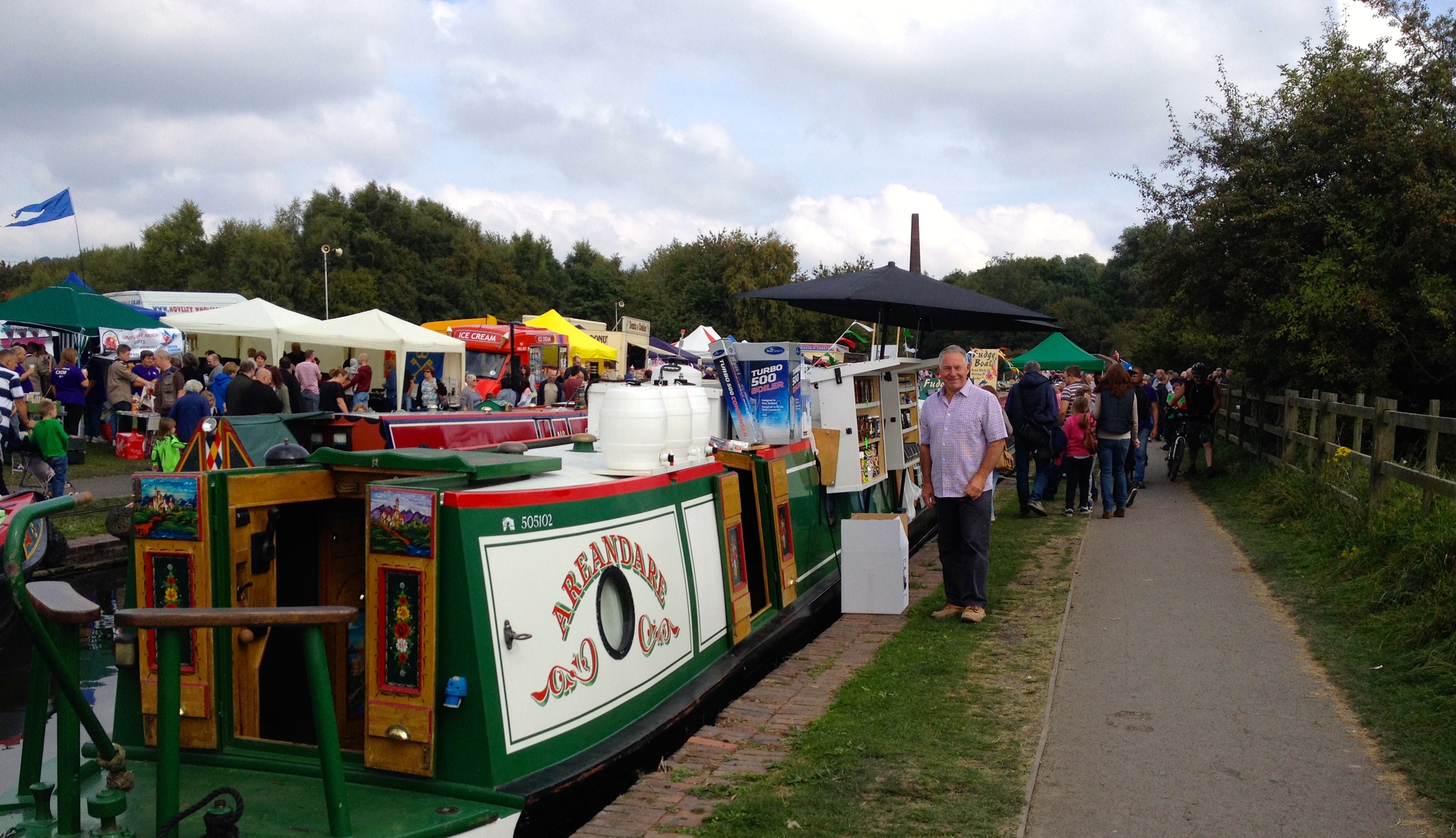 The captain and brew boat CEO – loving his ‘job’! 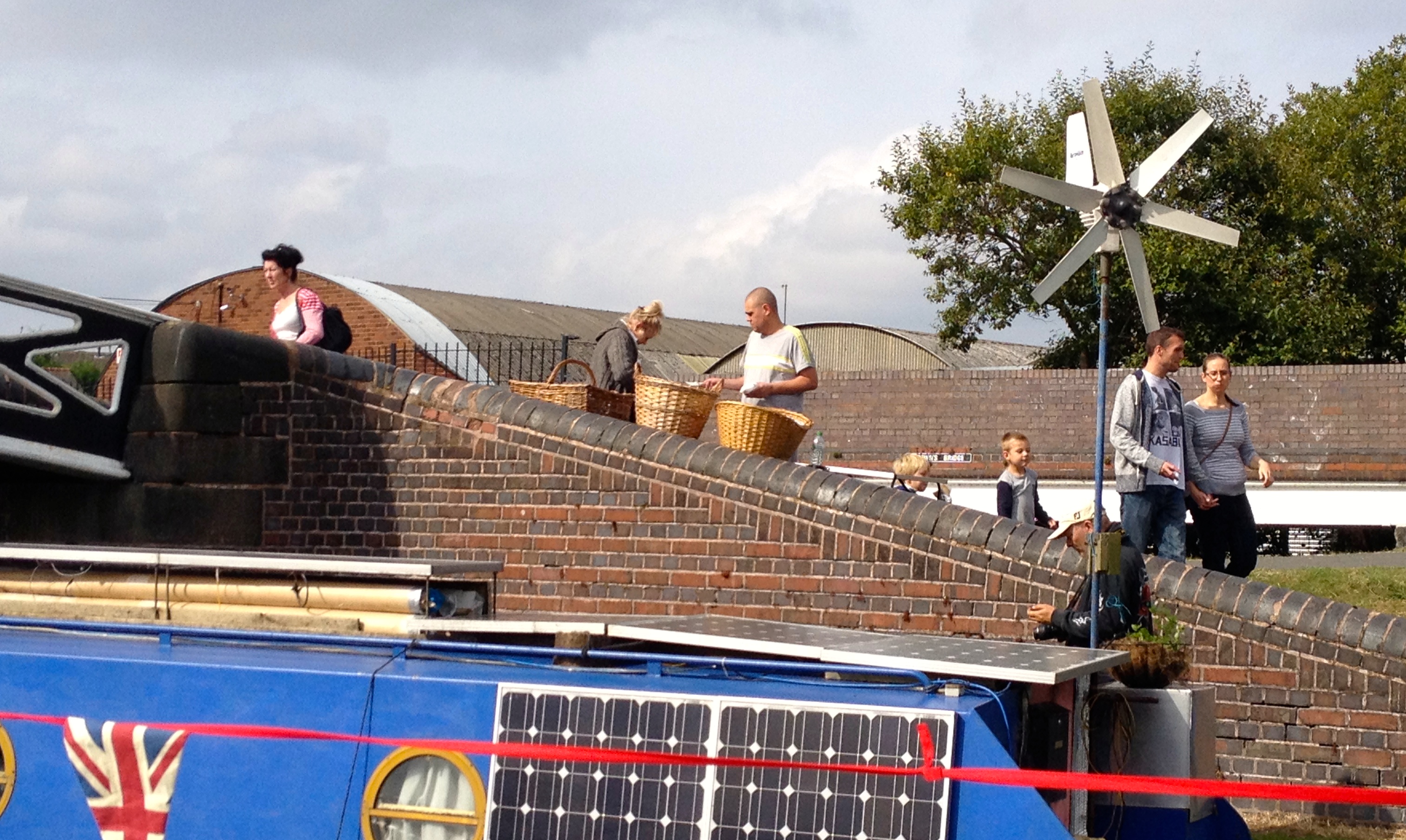 The apparently infamous ‘Pork Scratchings’ woman plies her wares from the bridge – home made and rather tasty! 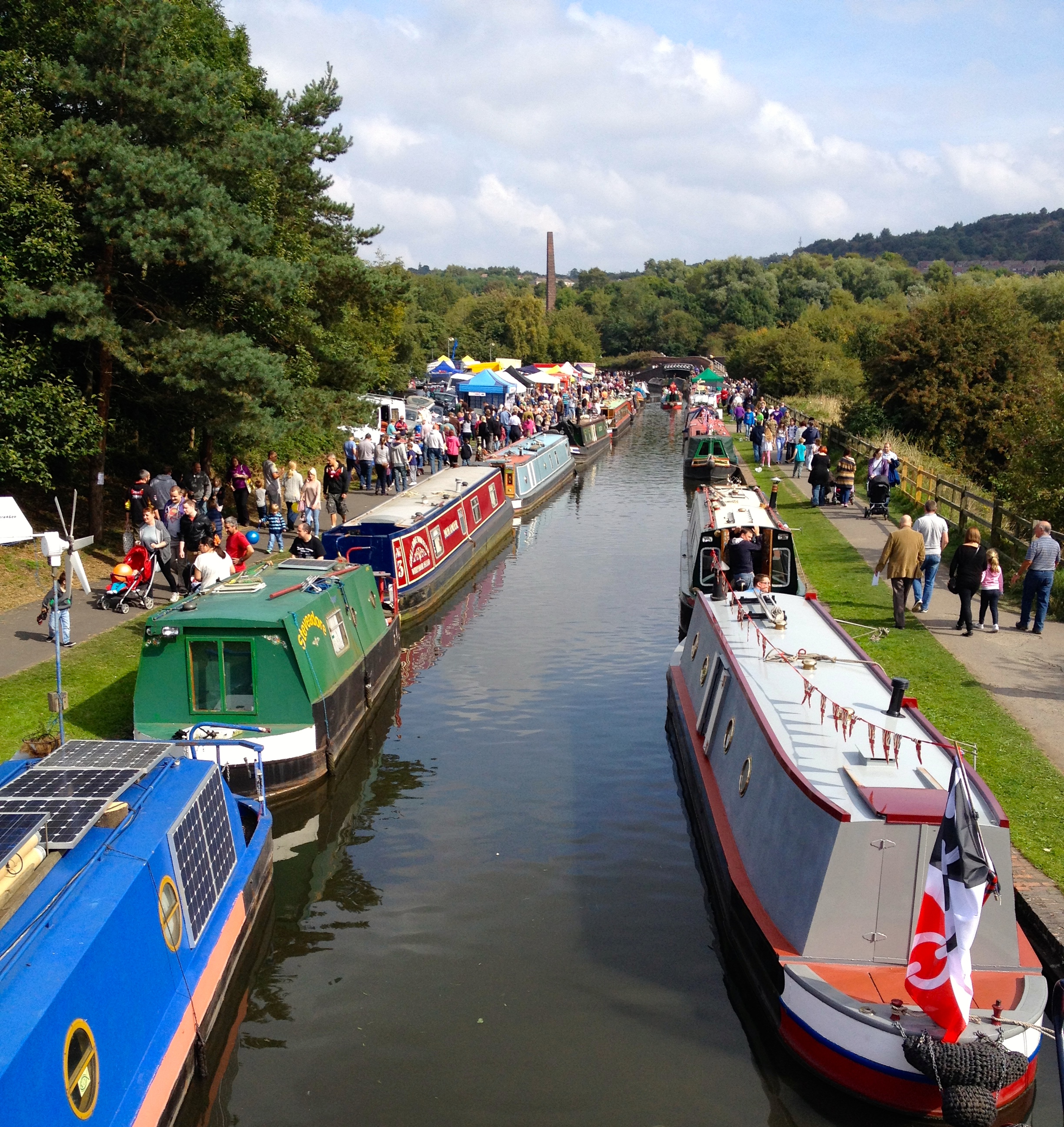 Another ‘teeming with people’ day 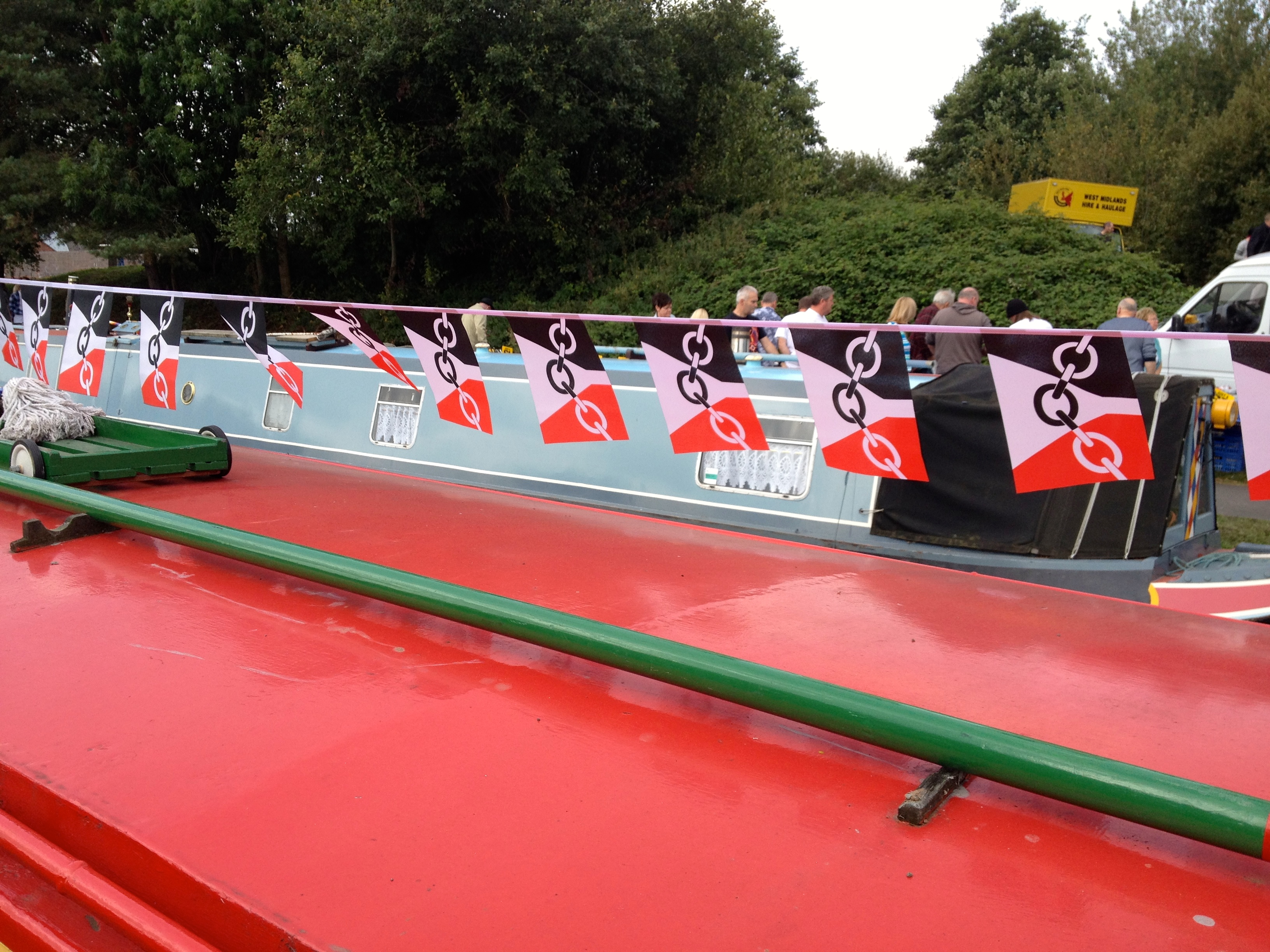 This boat proudly displays the official Black Country flag, designed by a local schoolgirl who won a competition 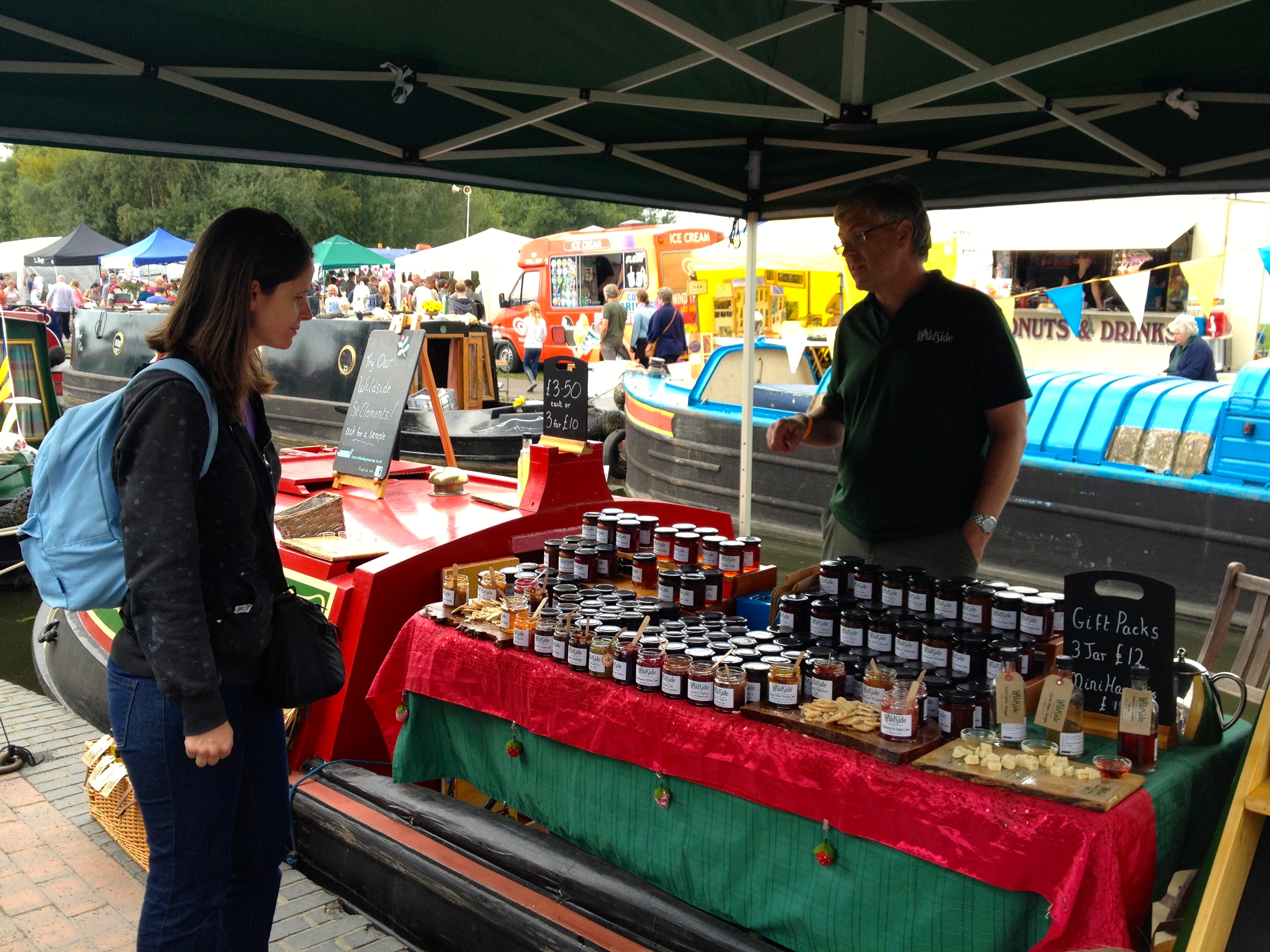 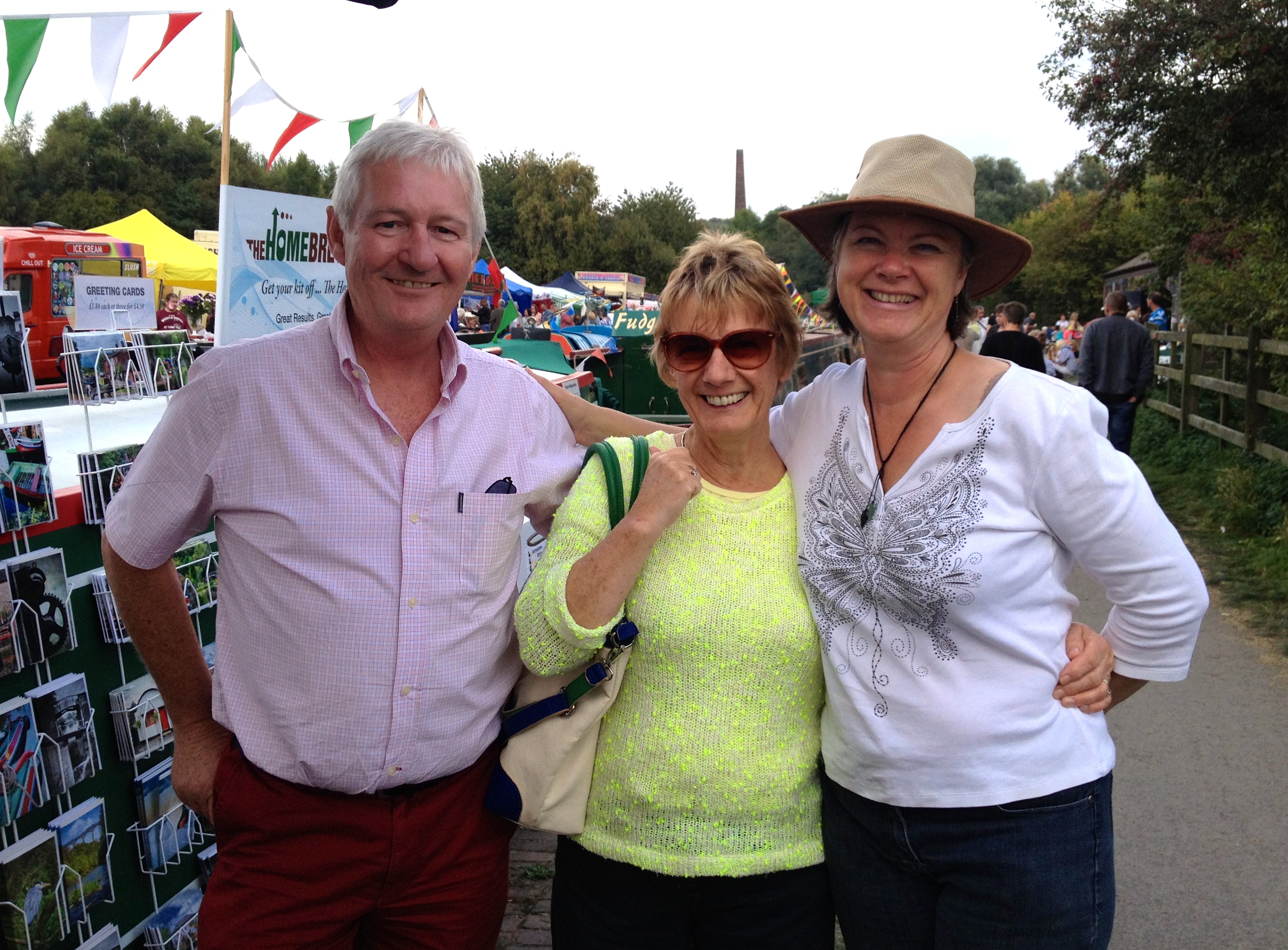 Heather and Tony on The Fudge Boat sold out by the afternoon! 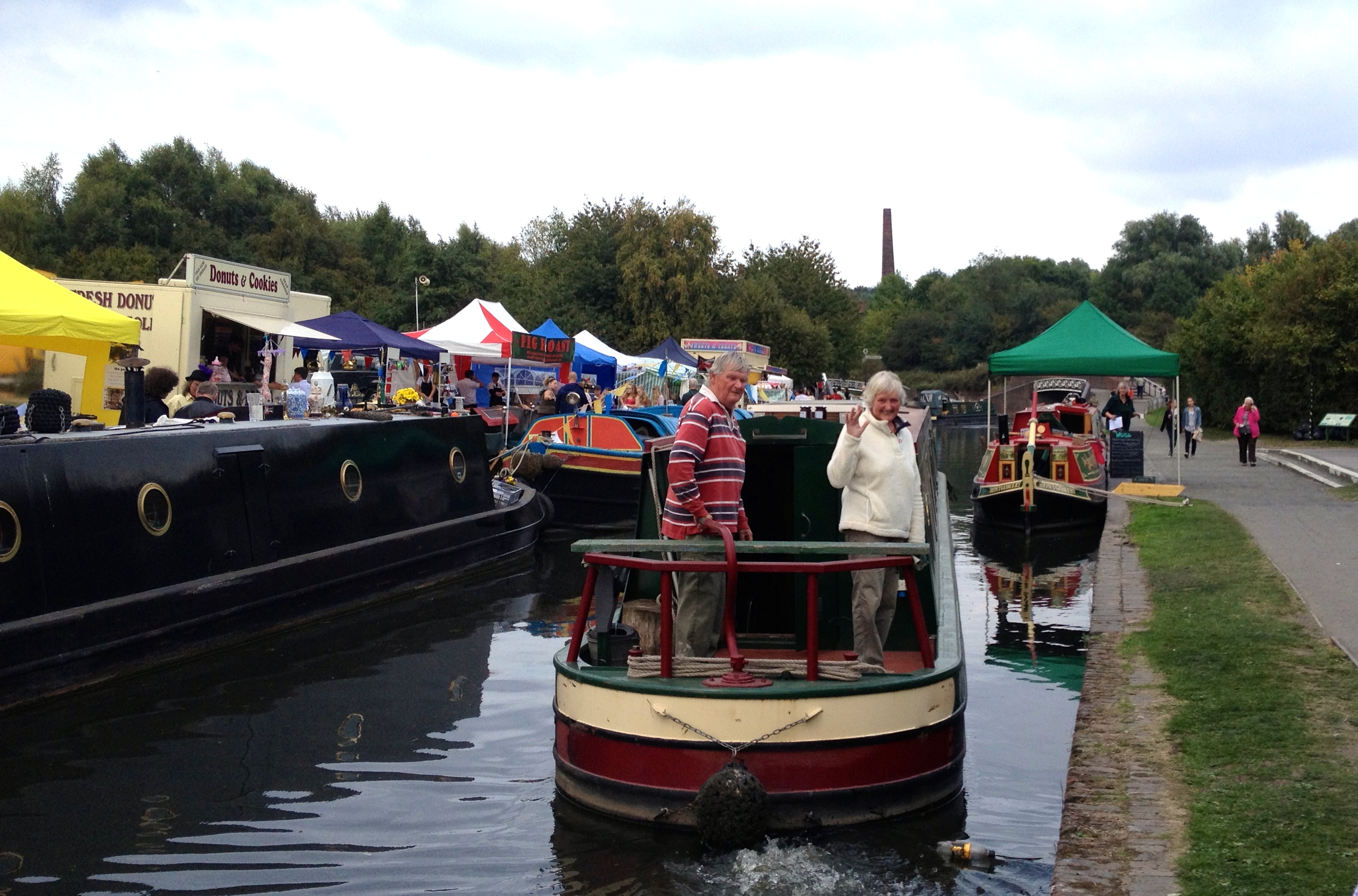 Bye bye for now, see you next year!

We had an amazing weekend, and have already booked and given our cheque in to book for 2015.

Yesterday evening Wand’ring Bark and Areandare formed a short convoy and sauntered along to a secure marina to moor the boats.

Barry and I are off to Ireland on Tuesday for a few days. I’m going for a conference called Wisdom 2.0 Europe, structured around the topic of ‘Wisdom and wellness in the Technological Age’, while Barry will be checking out the local landscape – and without a doubt spending as much time as possible in The Guinness Factory all for the purposes of research of course!

So there’ll be no more blogging until at least next weekend. After that we’ll be heading slowly to our last planned festival of the year The Parkhead Boating Festival, at lowers Green Pumphouse, in Dudley.