After almost five weeks of constant care and comfort, dad seems to have made a good recovery from his strokes. Despite that, he’s still the magnificent age of 94, and is frequently confused and befuddled. He continues to be a falls risk too, and it’s unlikely he’ll improve significantly more than he has. They have carers coming to their house morning and evening to support them, and have been offered six weeks of respite care annually, so they can both have a bit of a break and a breather from each other to re-charge their batteries.

Yesterday I heard a possible place had been found for his first planned respite stay, and the care home looked like a very suitable place for him to stay for a week. He’ll get company, attention, activities and it looks like a very high level of care. He’s likely to experience far more things to occupy his mind than his current routine of sitting in his chair most of the day, in between eating and sleeping.

I’ll have visited the establishment by the time this is posted – it certainly sounded impressive looking at their website and CQC report. I’ll update you all on how it went early next week …

On Saturday evening, all six boaters gathered aboard Areandare after a good day’s trading. As usually happens when we get together with Andy and Helen, the three packs of playing cards emerged from their cupboard in readiness for a game of six-handed-rummy. Suzie and Dave hadn’t previously been introduced to the complex but completely addictive game. It takes some time to really absorb all the rules and nuances of it. Suzie found her feet fairly early on, but Dave struggled a little – very understandably as far as I’m concerned!

I vividly recall in 2009 an evening when we had a friend from New Zealand on board (she was and is living in England now, and originated from Holland, but we met her in NZ!), she and Barry attempted to teach me a card game called ‘500’. Because they’d both played it heaps of times before, the rules sounded simple to them. To me it was like gibberish and try as I might, I couldn’t comprehend how to play. So much so, that after a while I felt so overwhelmed by the pressure to understand that I stormed off the boat!

Actually, I didn’t. I sat in the cratch in the pitch black, fuming inwardly and focussing on calming down while telling myself it really wasn’t that important. After about five minutes the boat doors opened. Barry was coming out to see if I was ok, assumed I was on the towpath, and jumped out of his skin when I spoke! That broke the ice …

Andy may not admit it openly, but he’s extremely competitive when playing this game. If on a winning streak he’ll declare it’s a game of skill. If losing, it’ll all be down to lady luck and the randomness of chance!

Saturday night he was unlucky – I won!

Sunday evening, Barry and I went to Wandr’ing Bark for a re-match as we’re unlikely to see our lovely friends again until late September. Andy’s skill appeared to be a little brighter that evening, but was pipped to the post by his adorable wife. 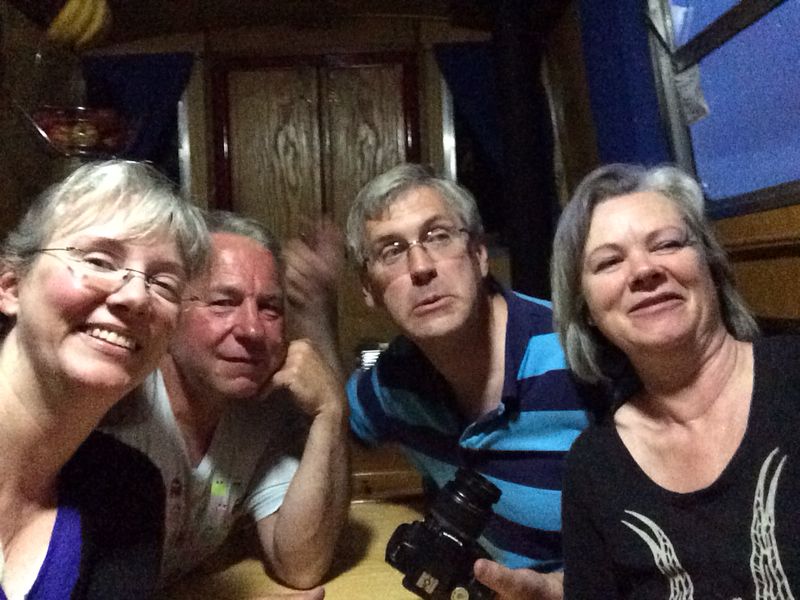 Not the best selfie, but slightly better than no photo to remember the evening by at all!

Last weekend was our fourth trading canal festival. Richard Parry, the CEO of the CaRT (!), has visited at Alvecote and Droitwich, and we wondered if we’d see him again at Etruria – we did!

He’s such a pleasant man. I know because I did actually get to chat with him for quite a while at Alvecote. The last two festivals haven’t allowed that to be repeated, as I’ve been so busy painting faces when he was around. Not that I see it as a problem, it’s marvellous to be earning some money again, and great that Richard witnesses trading boaters ‘in action’. The unassuming and always friendly Richard Parry visited the  festival – no-one had the opportunity of a photograph, but Suzie obtained a business card! The lock at Etruria – my face painting stand was just to the left of the bottom gate, you can just make out the gazebo

On Monday Barry and I drove into Stoke – I have my parent’s car at the moment which makes it so easy to get around locally – and get some groceries in as well as sorting out postage for website orders.

The Post Office in Stoke is situated within a WH Smith store, in one of the under cover shopping centres. As we were nearing said shop, we noticed the photo below outside the Vodafone centre. Can you spot the error?

We wondered how many people noticed the missing boat driver! Hilarious. Where did he/she go? Maybe they didn’t want to be in the public eye, as it looked like someone had been airbrushed out

He’s been fed and watered, and is quite possibly ready for another break from me now!

I feel refreshed, rejuvenated and ready to take on supporting my precious parents once again – but not by returning there to live 24/7. Although I believed that would be possible, I now realise it’s not. I have a life, and staying with them continuously will only lead to resentment from me and to me. It’s kinder for us all to accept that there are now lots of people involved with providing loving support as they journey in this new stage of their amazing lives together.

Once I’ve checked out the care home and okay’d it, Social Services will confirm the placement and arrange the funding. I’ll gently explain once again to dad what’s happening, pack his bags and personal effects, and escort him to his holiday home on Thursday, with mum. My next sister down, Linda, will arrive Friday to be with mum for two days.

I’ll then head off to Anglesey to spend a couple of nights with Lisa, Rob and my grandchildren. I’ll see the sea! Wonderful, I really miss living five minutes from the coast, and having never been to the island, it’ll be a real treat.

The captain will be meandering along with Suzie and Dave, to Westport Lake, where they’ll endeavour to do a spot more trading before the Middlewich Folk and Boat Festival the following weekend which we’re booked into.